The Carlinville City Council met Monday night to discuss a brief agenda. Only three items were listed on the agenda including an update on the Illinois Alluvial Regional Water Company by Carlinville representative Dan Held, an insurance renewal proposal from Dimond Bros. Insurance and discussion over cleaning bids.

The Insurance Renewal by Dimond Bros. was the most discussed topic among the council members. Mitch Newell with Dimond Brothers Insurance was present to go over the details with the council members. Newell reported that the total insured value of city property went up from $23 million last year to between $38 and 39 million this year. The increase was due to the new Public Safety Center.

The premium rates for the city were up by about 18 percent. Newell said that all public entity insurance rates were up. The insurance premium for this year is $176,969.

Alderman Kim Harber brought up issues with insurance between the City and Carlinville Park District. The property insurance cost for Loveless Park is $326,876 with a liability cost of $200. If the Park District already has property and liability insurance the City should be declared as an additional insurer.

Harber said the Park District would need to add the City on as an additional insurer or the contract negotiations between the two will continue. Newell added that on the property insurance the City should be added as a loss payee on the insurance so they and the Park District will both have to sign an agreement before anything can be done with a payment from a loss.

The council approved the insurance renewal with a premium of $176,969.

The council then moved into a discussion over cleaning bids.

Alderman Doug Downey quickly made the motion to approve Amy Lee as the cleaner beginning on Dec. 1. Since insurance was still fresh on its mind, the council discussed whether the cleaners they hired were required to have insurance or not. Harber said that the City had not previously required insurance for the position. No decision was made about insurance, but the council approved the hiring of Amy Lee.

Dan Held, the Head of the Public Works Department for Carlinville as well as the Carlinville representative to the Alluvial Board gave a brief update about the last Alluvial Board meeting. Held provided an update on the easement process, a group of landowners will be invited in to update them about the project and provide some information. Alluvial is still hoping to have 50 percent of the easements done by next spring or summer.

Alluvial has received the first half of Carlinville’s payment. Held reported that the company is almost ready to have USDA come in to the project for closing.

The next Carlinville City Council meeting will be Dec. 5 at 6 p.m. 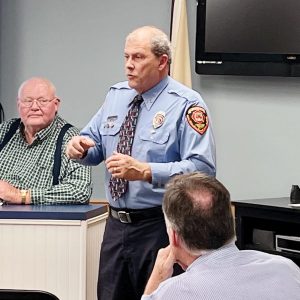