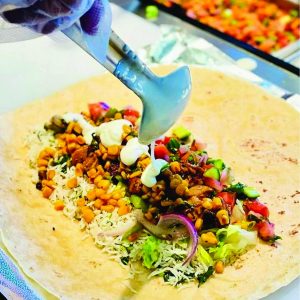 The Indian Kitchen opened its doors in the building which previously housed Camden’s. Though the restaurant offers a limited menu so far, it is made of items that put a new twist on classic dishes. Inspired by other build-your-own eateries. The Indian Kitchen offers three bases for a meal; a bowl, a roll, or a burrito, and then diners decide what toppings to add.

The owners, Jay Patel and Meet Pithadiya, are both young, only 22, and still attending college at University of Illinois Springfield, but have been part of the restaurant industry for years now. In Springfield, they have worked at Flavor of India, a sit-down restaurant run by their family. Patel says that though they are young they have been thinking of opening their own restaurant for a few years. While in Carlinville, scouting locations for a restaurant around the Square, they were suddenly and unexpectedly introduced to John Ziedler and given the opportunity to rent the building.

It took about a month for Patel and Pithadiya to get the taste perfected, and so far they have only heard positive feedback from the community. Patel says that first-timers as well as those more familiar with Indian cuisine have liked the food, saying, “Even if they’ve never tried it before, they worry that its too spicy, whatever it is. They come here they try it out, and so far everybody has been liking it.”

For those who have never had Indian food before, Patel recommends a curry bowl with butter chicken and extra rice.

Adding salad gives the customer the most bang for their buck.

Patel suggests that the unfamiliar stick to sweet and spicy sauce which is the medium spice level, though if that proves too much adding yogurt, lettuce, or cheese will tone down the spice.

New dishes are constantly on Patel and Pithadiya’s mind, and they hope to launch a new dish each week. For their opening week they offered samosa bowls. Samosa is a pastry with savory filling. In the samosa bowl the pastry is broken apart and the filling layered on. Patel says the business is currently working on a naan pizza as a new offering.

Patel and Pithadiya are the only employees while they are getting started. As the business progresses they will look to hire more workers. The two young men hope to be very involved in the Carlinville community. The support the restaurant has received from the community so far both surprised and delighted the two, who were initially concerned with how an Indian restaurant might be received. Patel encourages anyone who is hesitant about the foods or flavors to have an open mind and try out the restaurant. They might find a new favorite.

The Indian Kitchen is located at 366 South Side Square and is open from 11 a.m.- 9 p.m. Monday-Saturday.

More information can be found on their website theindianbowl.com or by calling (217) 303-9592.