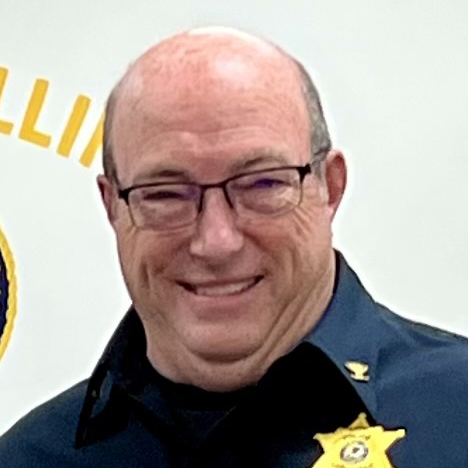 Chief Dave Haley has been with the Carlinville Police Department for over 30 years, beginning in 1988. After a long career dedicated to serving the Carlinville community, Haley announced his retirement will be on March 17, 2023. Enquirer~Democrat archive photo.

The Mon. Jan. 16 Carlinville city council meeting is the first and only meeting being held by the council for the month of January as the council canceled a meeting Jan. 3 due to a Federal holiday.

Several items were on the agenda including the official setting of the calendar for the city and city council and an agreement with Woodard and Curran for Project Management services. A matter of correspondence from Chief of Police Dave Haley was also on the agenda.

The first order of business for the council was to approve and place on file a letter from Carlinville Police Chief Dave Haley, announcing his retirement effective March 17. Haley began working for the City as a part-time officer in 1988 and became a full time officer in 1992. Haley served the department for 11 years before he was appointed Chief in 2004. Haley said in his letter ot the council, “After 30 plus years and 19 years as Chief, it is time to pass the torch. I am deeply grateful for the opportunity to work for the City of Carlinville and leas this department for so many years.”

The council accepted Haley’s letter of intent to retire.

The council discussed moving from two meetings a month to only having one meeting on the first Monday of each month. This issue was previously discussed in December when the council opted to wait to decide at the January meeting. Mayor Sarah Oswald brought the decision before the council but said it was only a suggestion and that she wanted the council’s opinion on the matter. While other council members were open to the idea, Alderman Kim Harber suggested that “now would not be a good time to switch as the budget is being worked on at this time.” Harber stated that “last year the council had to call a third meeting while working on the budget so dropping meetings at this time would not be in the council’s best interest.” It was suggested the council continue to have two meetings a month through February, at which time the council can re-examine if two meetings are needed.

The final City Hall calendar will be published shortly. For now, city council meetings will remain on the first and third Monday of every month.

Dan Held, the Carlinville representative to the Alluvial Board, gave a brief update at Monday’s meeting. The Illinois Environmental Protection Agency permits have gone through. Alluvial continues to work on getting the necessary easements for the project. An informational meeting for landowners will be held in the community room at the Carlinville Public Safety Building soon.

The council discussed a request from Carlinville Market Days for the use of the Square and the first block of East Main Street on the first Saturday of the month from April to November. Market Days requested use of the Square from 5:30 a.m. until 4 p.m. each month for the purpose of set up and tear down, though shopping hours would be from 8 a.m. until 3 p.m. They also requested they be allowed to hang a banner promoting the event on the side of the gazebo. The council approved the request.