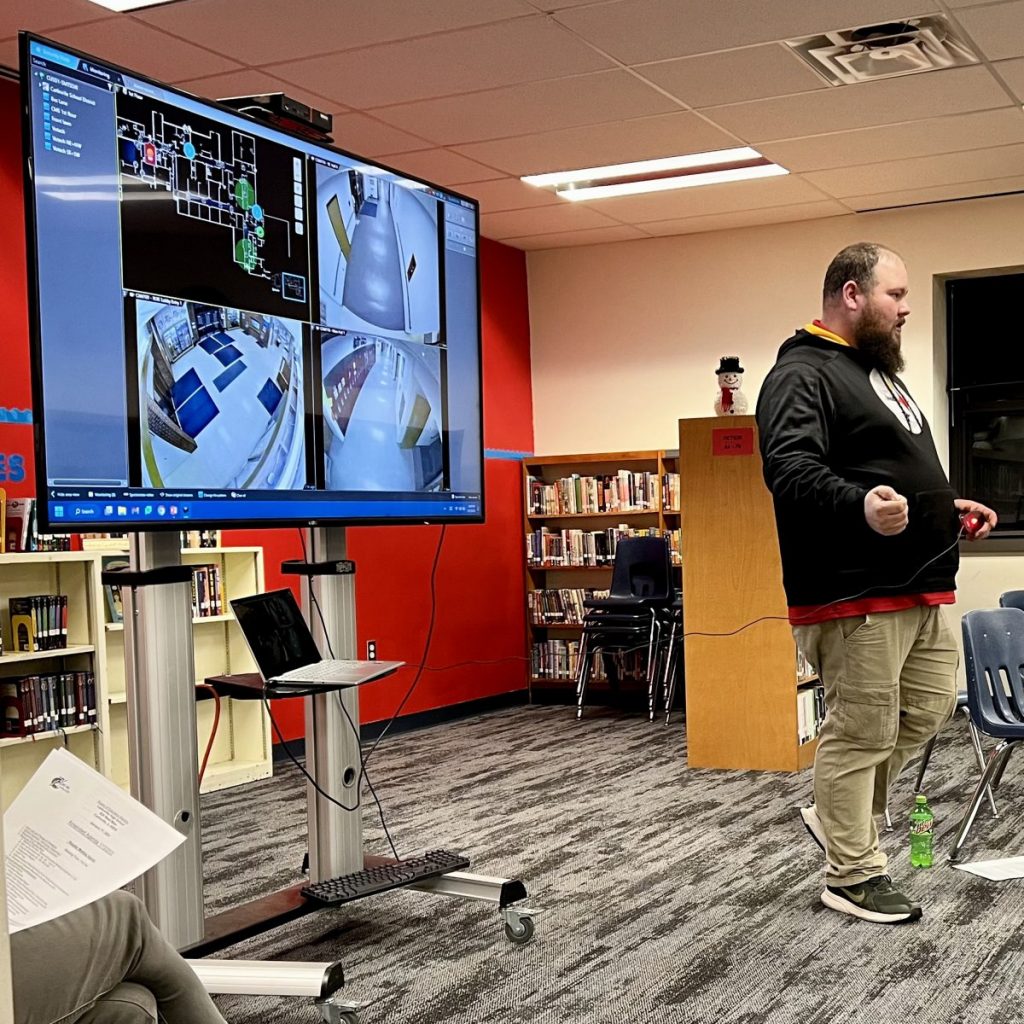 Dan Presley answers board member’s questions as he demonstrates the features and capabilities of the CUSD#1 security camera and monitoring system. Enquirer~Democrat photo by Erin Sanson.

The Carlinville School Board met Jan. 17 in a different locale than usual, holding their meeting in the Middle School Media Center so the Carlinville High School Scholastic Bowl team could hold their match in the High School Library. Several items were on the agenda, including an opportunity to co-op the girls soccer team and the appointment of a new School Treasurer.

District Spotlight for the month focusd on the CUSD No. 1 tech department which is made up of only three individuals for the entire district. Superintendent Dr. Becky Schuchman detailed out how much each member of the department is in charge of. There is a ration of 647 devices in the district to each employee. The tech department does receive a little help though as Dan Presley, Network Administrator for the district, teaches students computer repair and building in a computer tech class, offered to the juniors and seniors.

The technology department stayed in the spotlight the entire meeting as Presley and Gayla Walters, the districts Technology Coordinator, demonstrated new security systems that have been installed at all of the schools and a couple that have been installed a few places but will be added in the future. The new systems include door alarms, motion monitors, multiple cameras in each building showing multiple angles and remote door lock systems. The district is looking to add more cameras to the outside of the buildings in the future and potentially increase the number of remote lock doors.

Carlinville High School was approached by Northwestern High School about forming a co-op for girls soccer in the spring. According to Schuchman, a preliminary survey from Northwestern indicated they had six students who were potentially interested in playing. Schuchman said there would be no real disadvantage to agreeing to the co-op and suggested the board approve the idea. Carlinville would not move up in class even with the addition of Northwestern’s enrollment, so the soccer team would remain in Class 1A.

Several changes were made to the High school Course Book. Some changes updated dates or clarified language.

Due to new law, beginning with the class of 2027, students who meet or exceed State Standards on State assessment tests in English-Language Arts, mathematics and science must be automatically enrolled the next school year in the “next most rigorous level of advanced course offered.”

The Illinois State Board of Education has defined the accelerated course as “any curriculum or course that is beyond the current level that same age peers would normally be enrolled in.”

Some of the educators at the meeting and board members did not seem enthusiastic about the new requirement and worried about getting test results back to the school in a timely manner to meet that requirement.

Other changes included dual credit courses now offered at CHS through South western Illinois College (SWIC). Those classes include Machinist I and II as well as Precision Metal Production I.

The board approved the proposed changes to the course book.

After four bids came in for a Handicapped Accessible Van, though only three bid packets were fully complete, Victory Lane Ford was the lowest bidder for the vehicle. The district will be purchasing a new van for $74,884, of which $63,000 will come from a Special Education Grant. The van is being purchased in anticipation of more students in the coming years needing handicapped accessible vehicles.

A new School Treasurer was needed after the recent passing of treasurer Charlie Siegel, who held the position for many years. Craig Frankford was appointed to the position, which the board accepted.

A motion to approve the resignation of Mary Munsterman effective the end of the 2022-23 school year was accepted.

The board approved the second reading and adoption of the Press 110 Changes to the Board Policy.

The board voted not to release the executive session minutes for the previous six months as they dealt with issues of personnel real estate and negotiations.

Staff seniority lists were approved and accepted by the board. High School Math and Computer Teacher Mary Lauwerens now holds the coveted number 1 spot on the seniority list.