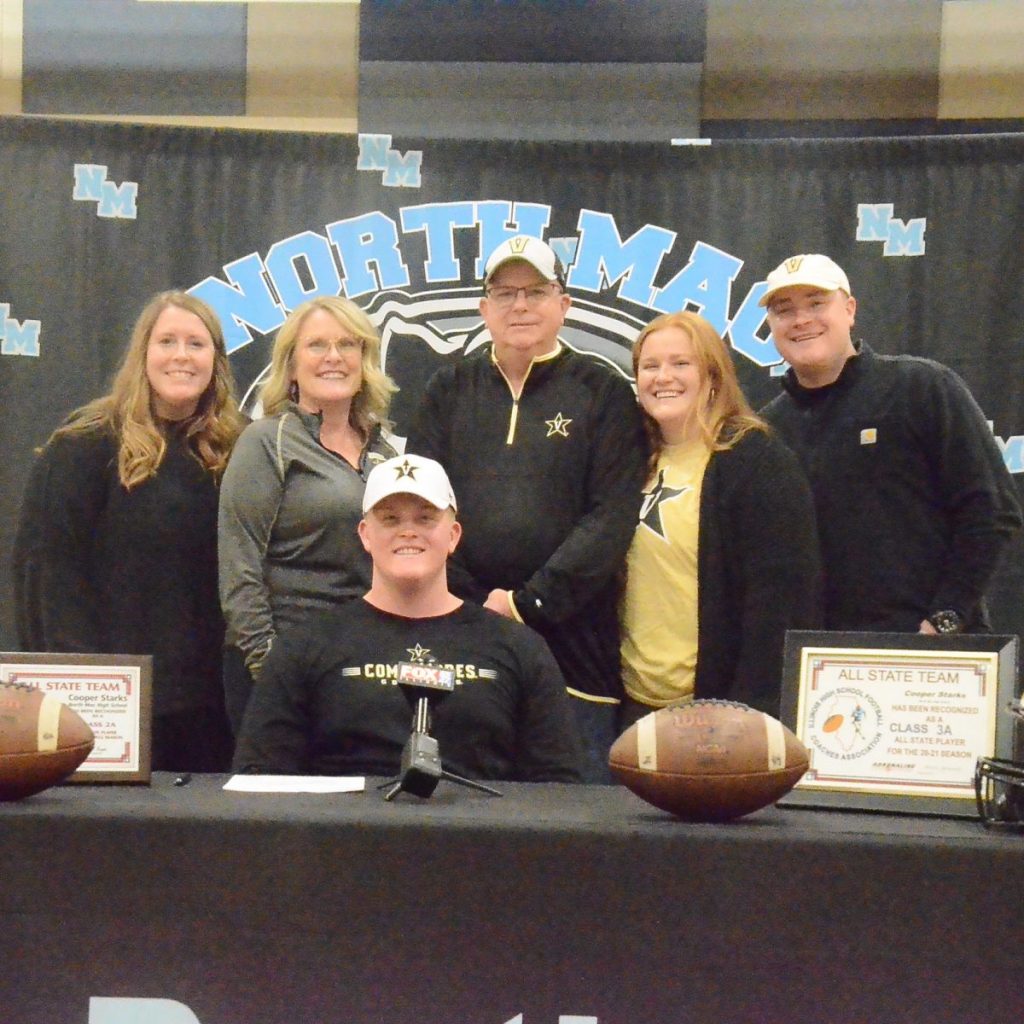 Surrounded by his family, Cooper Starks officially signed his letter of intent to Vanderbilt University football during a short ceremony in the North Mac High School gymnasium Dec. 21. Enquirer~Democrat photo by Jackson Wilson.

North Mac senior Cooper Starks officially became a member of the Vanderbilt University football team as he signed his official letter of intent during a short ceremony in the NMHS gymnasium Dec. 21.

“I want to thank you guys all for coming out to support me,” Starks said. “Not just for this, but for the past four years of my high school career here. This means more than you guys will ever know. I also want to thank my coaches, teammates and everybody else that was involved in my process, especially my family.”

Starks has solidified his legacy as a ‘small town great’ and is not only one of the greatest football players to ever walk the halls of NMHS, he is also one of the most talented, hard-working and gifted athletes the community has ever seen.

Starks made the varsity basketball team as a freshman and is the defending shot put champion of both the Macoupin County and Sangamo track and field meets.

Academically, Starks is a National Honor’s Society student and has made the honor roll on a yearly basis.

Based on research that had recently been conducted by NMHS football coach Patrick Bowman, Starks is only the third player in Illinois state history to become a three-time first team All-State selection.

Starks was also a three-time All-Conference selection – two years in the Sangamo and then in the South Central, which North Mac athletics transtioned to this year.

Starks was ranked as a three-star player by 24/7 Sports and was the No. 6 offensive lineman in Prep Red Zone’s national class of 2023.

In addition to being nominated as the Offensive Player of the Year in 2021, Starks has been recognized as North Mac’s Offensive Line award winner three times.

“We are all very proud of you,” NMHS athletic director Brian Carman said to Starks. “We’ve all been very fortunate to know you these past couple of years, as well as your family. This is super exciting and we can’t wait to watch you compete in the future.”

Starks is committing to a National College Athletic Association Division I school located in Nashville, Tennessee.

Vanderbilt competes in the Southeastern Conference which is currently, one of the most competitive leagues for NCAA football.

Vanderbilt was classified as the ‘13th best school in America’ by the United States’ News and World Report.

Starks will be coached by college alumnus Clark Lee, who returned to Vanderbilt in 2020 after spending several seasons as a defensive coordinator at Notre Dame.

Starks was recruited by A.J. Blazek, who was a Big Ten All-Conference center for the Iowa Hawkeyes. Blazek, Stark’s offensive line coach, carries over 20 years of sideline experience to the table in 2022-23. Blazek was previously a head coach at Iowa, Rutgers, WIU, Winona State and North Dakota State prior to landing his current gig at Vanderbilt