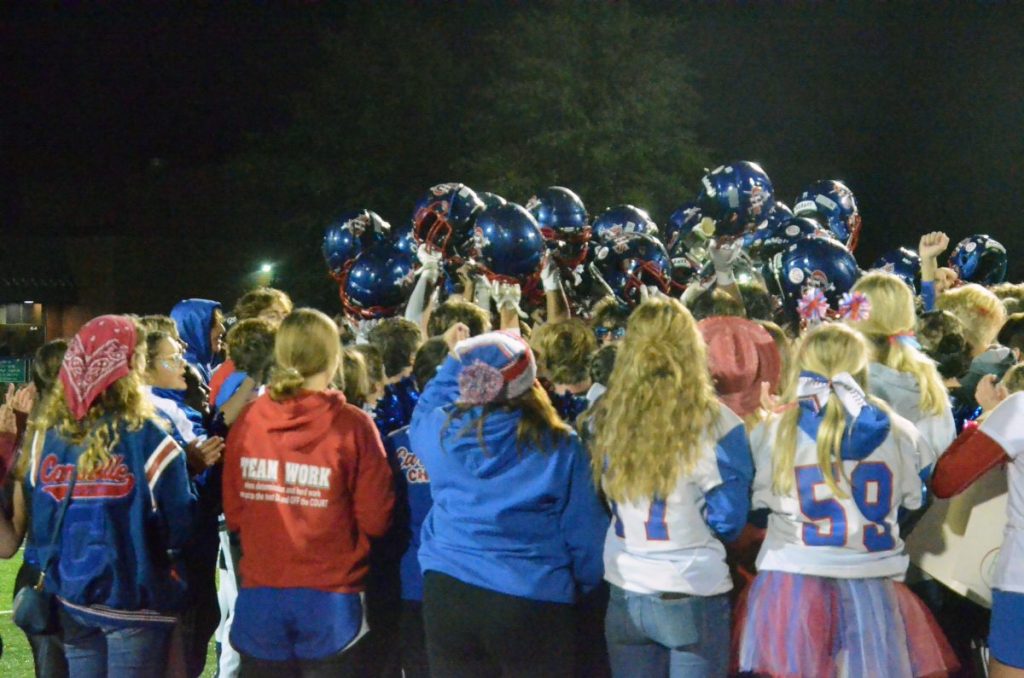 The Carlinville High School football team, pictured celebrating a home victory with the ‘Blue Crew,’ defeated Greenville on Senior Night, 33-0, and became playoff eligible Oct. 14. The Cavaliers are 5-3 overall heading into the final week of the regular season and have won five straight. Enquirer~Democrat photo by Jackson Wilson.

After getting off to their program’s worst start since 2008, the 2022 Carlinville High School Cavaliers remained focused under pressure, rallied and became postseason-eligible.

Carlinville is on a five-game surge after dropping the first three contests of the year.

Under Chad Easterday, who took over the head coaching job in 2007, the Cavaliers have never missed out on the playoffs.

A 33-0 win over Greenville on Senior Night Oct. 14 kept that tradition alive.

While the defense posted its third shutout in five weeks, Rex Reels and Jack Rouse collaborated for 338 yards and four touchdowns to get Carlinville to 5-3.

Zach Reels powered the defense with 16 tackles. Declan Braley and Conner Strutner were also major pests up front. The CHS duo busted through the Greenville line for a quartet of sacks and Braley additionally logged another double-digit amount of tackles with 10 on the night.

Carlinville wraps up the regualar season on the road at Pana, who enters Week 9 on a seven-game winning streak.

North Mac saw its undefeated season crumble at the hands of Pana in a battle of SCC frontrunners on the road.

A humbling 42-21 defeat dropped the visiting Panthers to 7-1.

North Mac had a 15-14 lead early in the second quarter but coughed up a pair of touchdowns in the closing 90 seconds of the first half.

As dominant as the Panthers’ defensive unit had been throughout the year, it couldn’t stop Pana quarterback Max Lynch. In addition to burning North Mac with a pair of touchdowns and 250 yards through the air, Lynch ran for 205 yards on 27 carries, which resulted in three scores.

When the dust had cleared, North Mac had surrendered more points in 48 minutes than it did in the past six weeks combined.

North Mac and Pana are now tied for the SCC’s top spot heading into the finale.

Staunton in the win column against Gillespie

Staunton snapped a seven-game losing streak with a 27-12 victory at Gillespie.

Cody Ury compiled 206 yards on nine successful throws and had a field day with Bo Buffington, who racked up 166 yards on four catches and a pair of touchdowns for the victorious Bulldogs.

Gillespie travels to Piasa to meet 3-5 Southwestern in a battle for pride Friday night. The host Birds were eliminated from playoff contention with a 28-14 loss at Hillsboro last week.