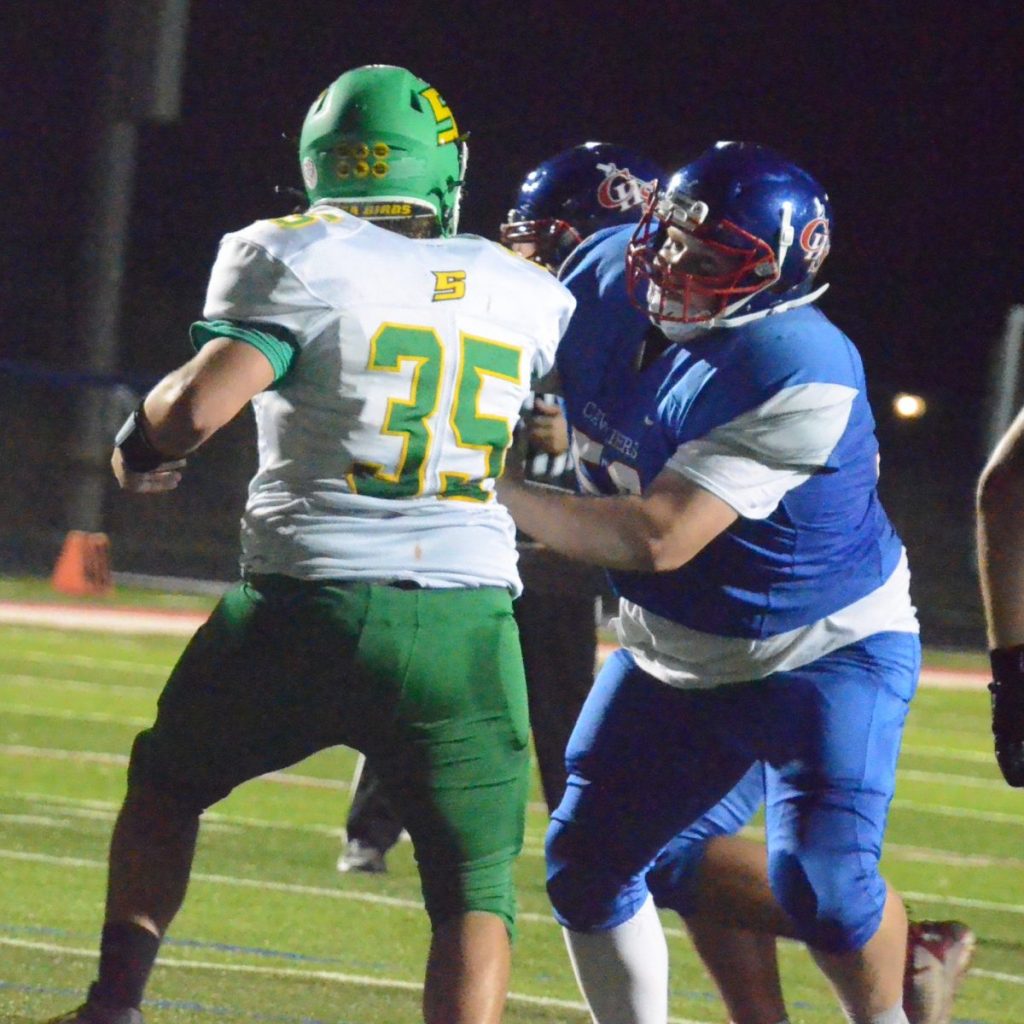 On Homecoming night Sept. 30, the Carlinville High School football team came out on top against Southwestern, 14-0, in a pivotal defensive clash.

The Cavaliers are now back at the .500 mark after getting off to their program’s worst start since 2008. Carlinville has dug itself out of an 0-3 hole and is 3-3 on the year.

The Birds, which have only beaten Carlinville seven times in six decades, plummeted to 2-4 and are now on the ropes in terms of earning a postseason spot.

A goal line stand by the CHS defense was the tone-setter on a chilly evening.

With just under three minutes remaining in the first half, the Cavaliers forced a fumble and recovered the football after stuffing the Birds on a fourth-and-goal play inside the two-yard marker to keep the game scoreless. The momentum instantly shifted and ignited the offense, which marched down the full length of the field and beat the buzzer on a 28-yard touchdown pass from Rex Reels to Ryenn Hart.

The Cavaliers doubled their lead in the third quarter on a ‘Reels to Reels’ connection when Rex linked up with his relative, Zach. The senior caught a short pass near the Southwestern 10-yard line and dove into the front right corner of the end zone for the score.

The visiting Birds were completely clipped from then on out. Ever since its 80-yard venture that resulted in the game-changing fumble, Southwestern failed to get into striking distance at any other point in the game.

The Birds surpassed midfield and flocked inside the Carlinville 40-yard line on a final desperation drive in the closing moments, but the offensive line collapsed and the Cavaliers ripped off a trio of sacks to put an exclamation point on the shutout win. Carlinville’s leading tackler Jake Schwartz, who ended the night with 13 total takedowns along with Z. Reels, made two of those sacks. Declan Braley picked up the other on what was one of eight tackles for him.

As it had done in each of the first six weeks, the Carlinville offense initiated more plays via the run game than in the air. However, R. Reels only needed 10 completed passes to lead the Cavaliers with 144 yards. Jack Rouse was asked to carry the ball 21 times, but only ended up with 82 yards after compiling 411 in the previous two games alone.

Southwestern only managed 171 yards as a team. Quinton Strohbeck, who was in the lineup after being carted off the field on a stretcher against Pana a week prior, watched 13 of 20 throws fall incomplete against a merciless pass rush. Strohbeck finished with 89 yards. The Birds’ running backs were additionally bottled up. Grayson Brewer had 43 yards on 14 carries and Jacob Fisher settled for 16 yards on nine rushes. Strohbeck was also involved in the run game, but only managed eight yards on 11 carries.

David Watkins was the backbone of the SWHS defense with 16 tackles.

Needing at least two wins in the final three weeks to qualify for its 15th consecutive postseason, Carlinville travels to Litchfield (1-5) Fri., Oct. 7 before concluding against Greenville (4-2) and Pana (5-1).

Southwestern will be attempting to stave off elimination from contention against 5-1 Vandalia in Piasa this Friday. In addition to this upset, the Birds will have to win out against Hillsboro (3-3) and Gillespie (1-5).

Kaden Brown got the Panthers rolling on a 54-yard touchdown rush 45 seconds into the game.

While the defense clamped up the Comets, North Mac built a commanding three-touchdown cushion heading into the break, 22-0.

The Panthers opened the second half with two more successful trips to the end zone in a span of five minutes, including one that was capped off by a 48-yard Brown pass to Logan Hammann.

Zane Hogan added 130 yards on eight rushes and broke loose on a pair of lengthy pursuits to the end zone in the fourth quarter. Hogan ran the first one in from 60 yards out and then took the second one to the house from the Greenville 43.

The Panthers’ quest for South Central Conference perfection continues at home this Friday against Gillespie.

Staunton ran into a buzzsaw on the road against playoff-bound Vandalia and remained winless through six weeks.

Cody Ury completed six of 20 passes for 74 yards and a pair of touchdowns.

A 63-18 blowout loss at Hillsboro eliminated Gillespie from playoff contention.

The Miners have lost five games in a row and are 1-5 overall.