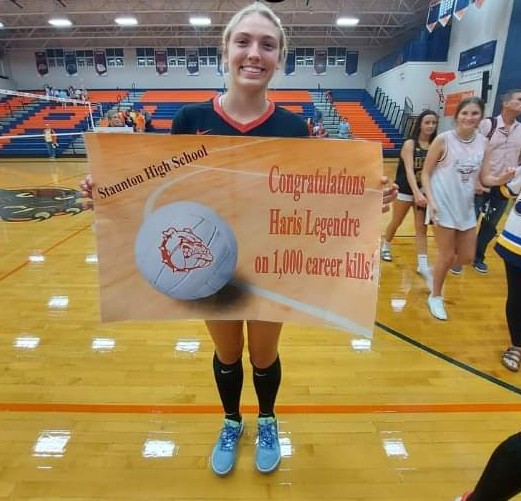 Haris Legendre reached 1,000 career kills for the Staunton High School volleyball team during a 25-12, 25-13 conference win at Pana Sept. 15. Legendre is the first ever SHS Bulldog to accomplish the feat. Photo contributed.

The long trip to Pana was worth it for Staunton High School volleyball players and fans, and it wasn’t just for a convincing 25-12, 25-13 win over a common conference frontrunner rival.

In addition, senior captain and outside hitter Haris Legendre became the first ever SHS Bulldog to reach and surpass 1,000 career kills.

Legendre, needing 16 to make history Sept. 15, finished the night with 17.

Though the feat was doable, it was also far from guaranteed. However, Legendre sent a message that it just may be the night after unleashing a flurry of seven kills in the midst of an 11-0 surge that Staunton used to grasp control of the first set. Heading into set two, Legendre already had 11 kills locked up.
The Bulldogs remained focused and didn’t let the accolade hype affect their performance down the stretch. Staunton jumped ahead 10-2 in the second set and had a commanding 21-11 cushion when Legendre reached quadruple digits.

Staunton, the back-to-back defending South Central Conference champion, has won 27 consecutive matches in league play. Additionally, the Bulldogs are the only SCC team to beat Pana in the past six years and they have now done it three separate times.

Since 2015, every SCC title belongs to either Staunton or Pana. The Panthers had won five consecutive championships before the Bulldogs dethroned them and began a dynasty of their own in 2020.

Staunton, which was coming off a three-set defeat at Breese Mater Dei two days prior, is 10-5 overall and 2-0 in the SCC.

Last weekend, the Carlinville High School volleyball Cavaliers picked up their first two wins of the season and placed eighth out of 16 teams at the Ray Long Pretzel Tournament in New Berlin.

Isabella Tiburzi fueled the onslaught with six aces, six assists and a trio of digs for the Cavaliers, who improved to 3-9.

Ella Clevenger put down five kills and came away with a rejection.

Southwestern is 3-9 on the season.

Gillespie made North Mac work for a conference victory in ‘The Pit’ Sept. 16, but a rally fell short and the Miners’ losing streak was extended, at the time, to seven games.

Gillespie put a 25-15 opening set defeat in the rearview mirror and forced a rubber showdown with a 25-21 counter. The Miners kept the third set close, but eventually ran out of gas as the Panthers survived, 25-20.

Gillespie’s skid was extended to eight Sept. 19, when the Miners were roughed up by state-ranked Lincolnwood 7-25, 10-25.

The Miners are 1-8 overall.

The Minutemaids are 0-4 against the league and 2-5 overall.