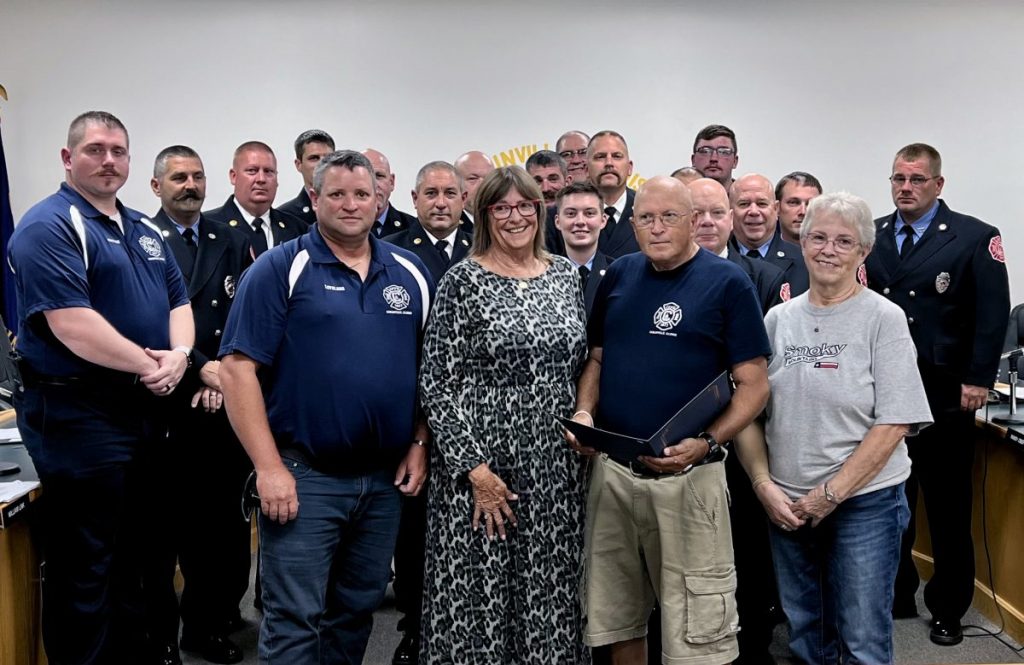 The September Carlinville City Council meeting was held Tues. Sept. 6 due to the Labor Day Holiday weekend. Several items connected to water were discussed such as water meter replacements and a Co-Bank loan extension for the Alluvial Water project.

The first matter of business was the reading of a proclamation for Jerel “Jerry” Loveless in honor of his 50 years of service to the Carlinville Fire Protection District. Over those 50 years, Loveless rose to the position of Fire Chief for Carlinville. During his time as Chief, Loveless also served on the Macoupin County 9-1-1 board and oversaw the move to the current firehouse on West Second South St. Loveless is still involved with the Fire Department, where he is currently listed as a Firefighter.

An extension to the Co-Bank loan was approved by the board. Alderman Doug Downey asked whether there would be any problems with the loan if the Alluvial Project fell through. Attorney Don Craven said that Carlinville would be on the loan and would have an obligation to Co-Bank whether the project moved forward or not.

An update from Joe Direso regarding the Illinois Alluvial Regional Water Company was included in the agenda packet. According to Direso’s notes, Alluvial attorney David Forman is having the Carlinville easements redrafted using a title company. The Alluvial Board also passed a policy requiring in-person attendance to all board meetings. Direso was the only board member to object to the policy. Direso also stated that “none of Carlinville’s questions following David Forman’s presentation were addressed.”

The contracts between Carlinville and the Policemen’s Benevolent Labor Committee were approved by the council. The contracts are valid from May 1, 2022 until April 30, 2025. Changes in the contract language were mostly updating dates to reflect the accurate contract duration. There was an increase in base salary. A section regarding the lateral entry program Carlinville agreed to in July was added to the new contract. Due to the lateral entry programs, offices will be able to transfer up to 10 years of service as a certified police officer if changing departments. The transfer applies to wages, longevity and vacation earning. Other factors like seniority, shift bidding or time necessary to qualify for promotions are not included in the transfer program.

Changes were made to the insurance offered by the Department, specifically to retired employees. Any employee hired after the contract was approved will have to be 55 years of age and have been in service for at least 20 years to qualify for the employer paid health care plan. Previously an employee needed to only be 50. A health insurance advisory committee is also to be established according to the new contract. Downey voted against the measure. The motion was passed to approve the contract.

The city has been looking into financing for a water meter replacement project, and it wanted to obtain local financing if possible. The two closest loan offers came from United Community Bank (UCB) and CNB Bank and Trust. UCB offered an interest rate of 3.5 percent versus CNB at 3.55 percent. City Treasurer Jody Reichmann stated that almost all of the loans Carlinville currently has are through United Community. The council felt this loan might be a good opportunity to “spread the wealth” and utilize a different bank for project financing.

A representative with Woodard and Curran was in charge of getting the financing from the local banks. Reichmann said that she was recently in contact with UCB again about any additional fees they might have to finance the project. There would be a $10,000 attorney fee to use UCB as the financier for the project. Alderman Bill Link made a motion to use CNB for water meter replacement financing at a 3.55 percent interest rate. The motion was approved.

The new city of Carlinville website was officially launched in late August. There are several grants that Zilm is applying for, especially an IDOT grant which could help redo the sidewalks around town.

An ordinance that established the positions of administrative coordinator and economic development coordinator for the city was approved.

A draft ordinance was discussed at the August 15 city council meeting. There were a couple wording errors that were fixed in the version presented at the Sept. 6 meeting.