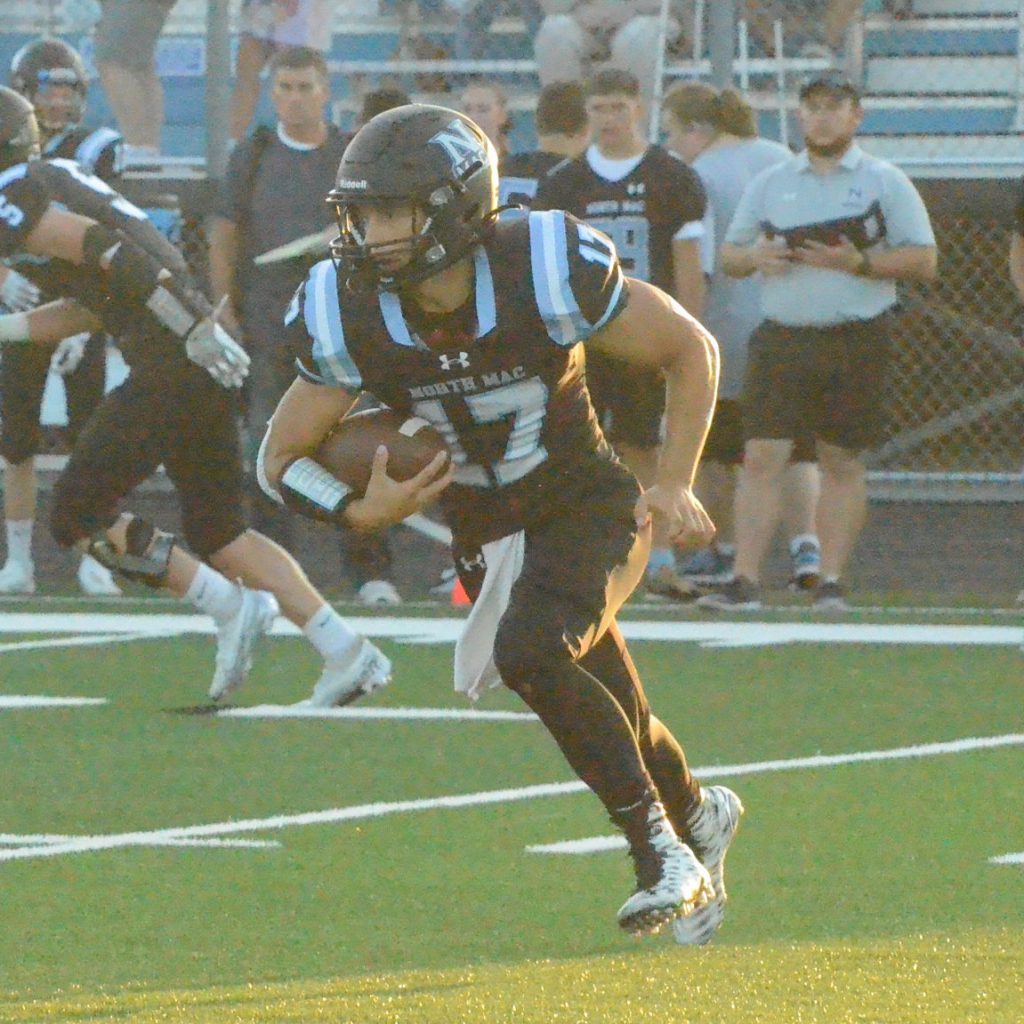 Kaden Brown rushed for 134 yards on 13 carries and helped lead the North Mac High School football team to a 40-0 victory over Carlinville in Virden Aug. 26. Brown, the Panthers’ quarterback, totaled 224 yards and additionally threw a 57-yard touchdown pass. Brown also ventured 63 yards to the end zone on a quarterback keeper that put North Mac on top on just the second offensive play of the night. Enquirer Democrat photo by Jackson Wilson.

For six years, the North Mac community had to live with the bitter taste of a heartbreaking 27-23 IHSA state semifinal loss that came against Route 4 rival Carlinville in Virden.

That unfortunate memory was finally put to bed last weekend.

On Aug. 26, an experienced and hungry core of Panthers proved too much for a young Cavaliers’ team to handle in North Mac’s highly-anticipated South Central Conference debut.

The Panthers, led by 18 seniors and a Division I commit in Cooper Starks, electrified a racous home crowd and flipped the script on their Route 4 rival with a stunning 40-0 victory.

“The kids fed off that [2016 loss],” NMHS head coach Patrick Bowman said. “Every time you have the neighboring school district coming in and you’re starting a new beginning in a new conference against a program that has dominated for so long, you’re going to come in with a lot of energy.”

“We played a great ballclub,” CHS coach Chad Easterday said in respect to North Mac. “We’re young and I was hoping that we wouldn’t make as many mistakes as we did early on.”

One glaring issue for Carlinville was its mental game. The Cavaliers committed five penalties in just the first 12 minutes alone, including two before they could even get a snap off. That led to a major downslide for an offense that only managed 125 yards the entire night against a powerful Panther front and pass rush.

“Those miscues killed us,” Easterday said. “Obviously, when you have first-and-15, it doesn’t help the play sheet very much. But, that big fear came true. We played a great opponent and had some people that hadn’t been in the mix before. We dug ourselves a hole that forced us to do things we weren’t able to do.”

The Cavaliers put together a 54-yard drive in the closing minutes of the first half, but failed to put points on the board. Since then, they were completely locked up, only producing a total of six yards in the game’s final 24 minutes.

On the other side, the Panthers could do whatever they wanted, especially on the ground. Offensively, North Mac tallied more than 500 yards, including 468 via the running game.

In a college commitment interview earlier this summer, Starks said the Panthers were experienced in cranking up the tempo during their time in the Springfield area’s Sangamo Conference over the past decade, particularly against foes like former rival Auburn and Williamsville – two programs that have consistenly contended for and or won state titles. On just the second offensive play of Friday’s opener, North Mac backed up that remark from its senior captain and was off the to races when quarterback Kaden Brown broke loose for a 63-yard touchdown scramble.

“We came in with the attitude that we were going to have our hands full with Carlinville but we hopped on, scored that early touchdown and kept the momentum going,” Bowman said. “We can go fast when we want to. You saw early, quick, quick, quick.”

Carlinville managed to quiet the crowd for a brief moment when Ethan Gibbel intercepted Brown nine yards in front of the end zone on the next drive. However, the Cavaliers went three-and-out and gave the ball back to the Panthers immediately.

North Mac regrouped and found the end zone on each of its next three trips and took total control, 27-0, heading into halftime.

The Panthers started the second half with the ball and didn’t waste any time putting the final nail in the coffin. In a blink of an eye, Reed

Lewis was in the clear and took it to the house on a game-high 86-yard sprint.

North Mac scored one last touchdown to trigger a running clock with just over six minutes remaining in the fourth.

Brown led the Panthers with 134 rushing yards on 13 carries. He only threw five passes, but one of them resulted in a 57-yard touchdown that was scored by Joe June at the start of the second quarter. Overall, Brown had 224 yards in the win.

Lewis added 134 yards on 14 carries and was one of five Panthers to find the end zone. Joe Reinhart scored two touchdowns on 10 carries while contributing 56 yards. Zane Hogan carried the ball 11 times for a touchdown and 72 yards.

“We’ve got a lot of weapons and definitely a good game on offense,” Bowman said.

Defensively, North Mac was the first team to shut out Carlinville since Pana did it in 2015 (35-0). June took center stage for the Panthers, bringing down 13 Cavaliers and recovering a fumble. Reinhart added nine tackles.

“We bent a couple of times, but you have to be excited any time you put up zero on an opponent,” Bowman said. “ 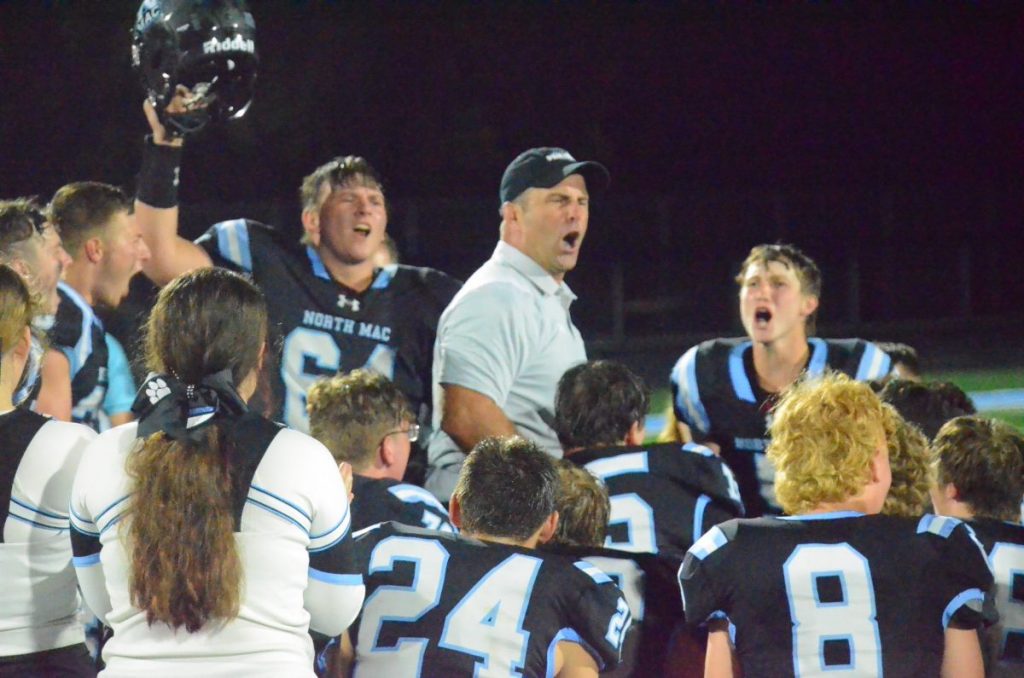 North Mac High School football head coach Patrick Bowman celebrates with his team following a 40-0 victory over Carlinville in the Panthers’ South Central Conference opener. This was the first meeting between the Route 4 rivals since Carlinville beat North Mac in an IHSA Class 3A state semifinal at the same location six years earlier. Enquirer~Democrat photo by Jackson Wilson.

CHS quarterback Rex Reels completed 12 of 20 passes for 87 yards in the loss. Liam Tieman caught four of those throws and finished with 38 yards.

Easterday, aware that the road was not going to get much easier for the Cavaliers with Vandalia coming to town Sept. 2, kept things brief when talking about preparation.

“We have a lot to fix,” Easterday said. “Let’s come with the right atttitude. It hasn’t been so long ago that we started with a few losses on our record. We will do nothing but improve from this.”

Grayson Brewer led the charge for the Birds with 122 yards and a touchdown on 19 carries. Jacob Fisher added a pair of touchdowns and 42 yards on 18 carries. Quinten Strohbeck generated 78 yards at the quarterback position while also finding the end zone.

In the losing effort, Cole Sternickle (12), Andrew Dustman (11) and Zach Painter (10) racked up double digits in tackles for the Bulldogs.

The Gillespie Miners let a 18-6 lead get away from them in the fourth quarter, but saved the game with a touchdown in the final minutes and survived Litchfield, 24-18, in Dalton Barnes’ coaching debut at Don ‘Duke’ Dobrino Field.