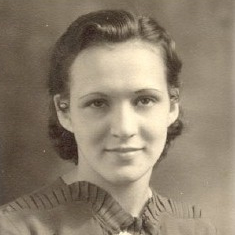 Born July 11, 1919 on her family farm in Macoupin County, Marjorie was the eldest daughter of Clara Mae and John Williams.

Marjorie attributed her long life to growing up on a farm and drinking lots of milk. She enjoyed riding her horse Prince five miles to a one-room school house with her brother, and tells how the teacher had her recite the alphabet both forwards and backwards when she ran out of things to do—an accomplishment Marjorie could perform all her life. Marjorie also recalled not really being aware of the Great Depression, because life on the farm was much the same—hand to mouth. However, she did remember her mother feeding sandwiches to hobos who came by more frequently then.

Marjorie met her future husband John Muench when she entered high school in Carlinville. She graduated in 1936, and they married in 1938, continuing to live in central Illinois until moving to Syracuse, New York in 1941, where their first son was born. In 1942, Marjorie and John returned to Illinois and lived in Springfield and then Carlinville areas where their next two children were born. In 1949, Marjorie and John moved to La Grange Highlands, a western suburb of Chicago, where their next three daughters were born; and then in 1960 they moved to the “big” house in La Grange, where they welcomed their fifth daughter. Although Marjorie was a more traditional at-home Mom, she did learn to play Bridge and enjoyed it immensely. She was also proud to be a part of the local chapter of the Daughters of the American Revolution.

After losing her husband in 1998, Marjorie decided to join two of her daughters living in Colorado. At age 82, Marjorie moved to Parker, Colorado.

In 2008, Marjorie brought one more “child” into her life—her little dog “Buddy”—and remarked that if it weren’t for Buddy, some days she wouldn’t even bother to get up.

She is preceded in death by her parents; her brothers, Harold, Kenneth, and Melvin, her sisters, Dorothy and Olive, her husband, John D. Muench and her eldest son John F.

Following COVID restrictions and protocols, a small friends and family gathering was held Thursday, June 4, 2020 at the Parker Funeral Home, in Parker, Colorado

Marjorie had wished to be buried with her husband at New Calvary Cemetery, and have all her children attend. Heinz Funeral Home was entrusted with the care and arrangements to facilitate these wishes. On Saturday, May 7, 2022, Marjorie and John’s six children and spouses met once again, this time to bury their mother’s cremains in a private family service, also attended by several grandchildren and spouses.