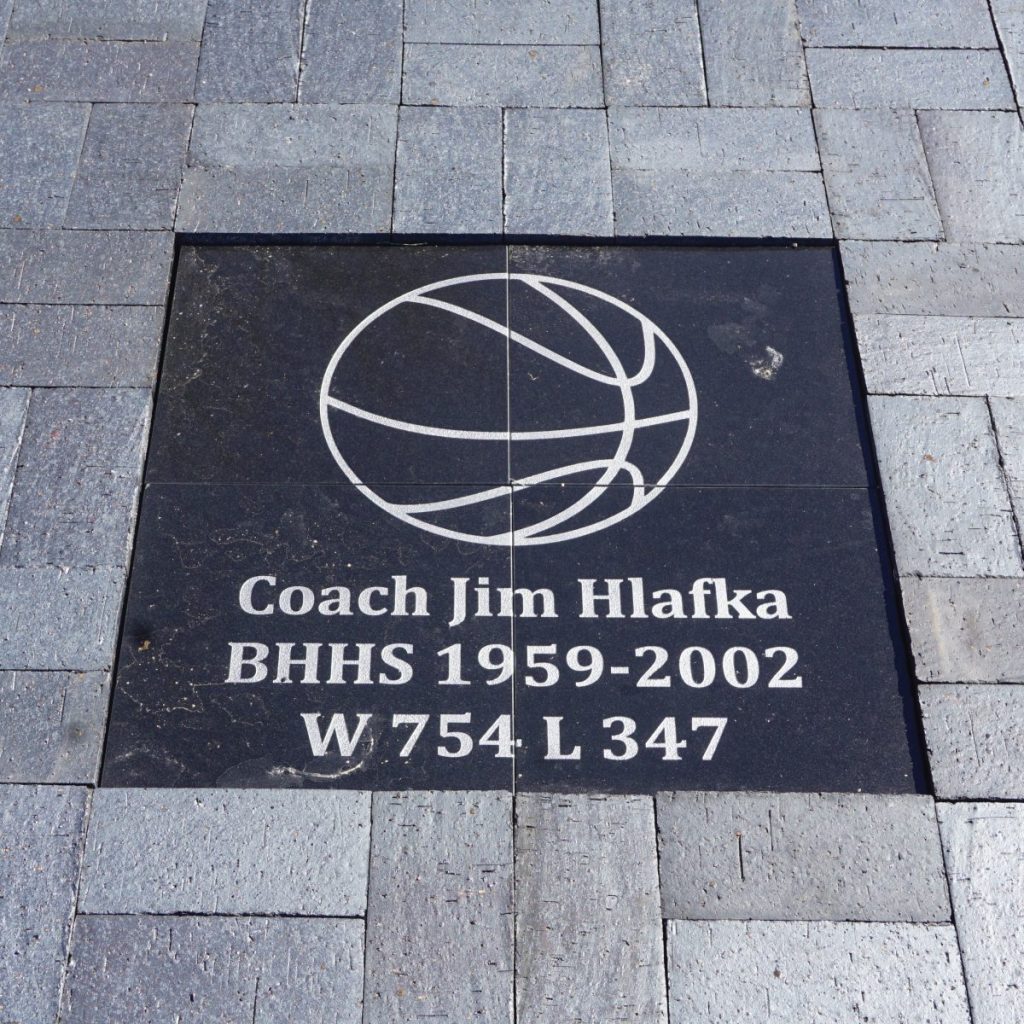 A new basketball court now resides in Mae Meissner Whitaker Park in Bunker Hill. The court features two adjustable hoops, lights, and a concrete court. The thing that makes the court special is who it is dedicated to.

It would not be too far from fact to state that most people who live in Bunker Hill know of Coach Jim Hlafka.

Hlafka, a Gillespie native, spent over 40 years coaching boys basketball in Bunker Hill. He coached hundreds of boys over his time at the High School.

One speaker at the court dedication ceremony mentioned that Hlafka had come up to him when he was still a young boy playing in his driveway to give him some basketball pointers. It seemed to only make sense that Hlafka had the court named after him.

Besides being a much loved figure and coach, Hlafka is also an IHSA basketball record holder. He holds the 13th spot on the IHSA All-Time Basketball Coach list for most wins in his career, having won 754 games throughout his career. He is also on the list in the sixth spot for most wins at a single school. Hlafka was inducted into the Illinois Basketball Hall of Fame in 1983. He passed the 700 game mark in 2002, winning the Macoupin County Tournament. That same year the Bunker Hill High School gymnasium was named in his honor as James Hlafka Hall.

Though Hlafka could not attend the ceremony held Sat. Mar. 26, many people, both young and old, came to the ceremony to speak a few words and honor the record-holding coach. Several of his former players came out to speak about the influence Hlafka had on their lives.

David Jones, who coached alongside Hlafka from 1974 until 1998 said that he always encouraged people and his players.

Former player Steve Stoney commented in hi speech that, “He [Hlafka] should be sitting up on Lincoln’s statue because he has done more for Bunker Hill than anyone else.”

Another former player, Darral Rucker, said, “If you want to know what a mentor looks like, look at Coach Hlafka.”

The dedication was followed by a 3 on 3 basketball tournament, originally meant to be held at the new court. The weather forced the tournament, the food trucks and the eighth grade bake sale to relocate to the Bunker Hill high school gym.

The group that started the project laid over 1,500 bricks. Several of the pavers were dedicated by former players, graduating classes, co-workers and community members.