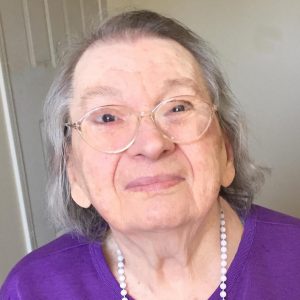 Lucille D. Early, 96, passed away on Feb. 23, 2022 in Middletown, NJ where she and her husband Joseph J. Early had moved to be near family. The couple were formerly of Glen Carbon.

She was married to Joseph J. Early in 1948 at the Immanuel Lutheran Church in Mt. Olive. They had celebrated over 70 years of marriage.

Lucille grew up in Mt. Olive, where she attended Immanuel Lutheran Grade School and graduated from Mt. Olive Community High School. She was proficient at math and worked in St. Louis for several years before meeting and marrying Joe. They lived in St. Louis for a short time before moving to Glen Carbon where her father Charles Franke, a carpenter, had built a home for them.

She was a homemaker dedicated to her family yet also active in organizations at Trinity Lutheran School and Church in Edwardsville. She and Joe later attended and were active in St. James Lutheran Church in Glen Carbon.

Burial will be at the Immanuel Lutheran Church cemetery in Mt. Olive. A graveside service will be held for immediate family.

Memorial contributions in memory of Lucille Early can be made to: St. James Lutheran Church, Glen Carbon.

For online condolences go to beckerandson.com.