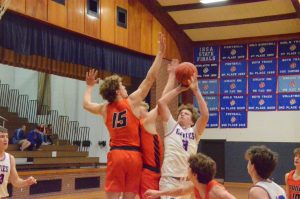 Carlinville’s Ryenn Hart, pictured shooting a jumper during a home game against Pana Feb. 11, scored a career-high 26 points and propelled the Cavaliers to a 50-42 road conference win at Piasa Feb. 14. Enquirer~Democrat photo by Jackson Wilson.

After getting shut down 66-41 by South Central Conference champion Pana at home last Friday, the Carlinville High School boys’ basketball team bounced back and got a key 50-42 road conference win over Macoupin County Tournament champion Southwestern in Piasa behind a career high scoring performance from Ryenn Hart on Valentine’s Day.

Hart scored 26 points, including 12 in the fourth quarter to help the Cavaliers stretch a 31-27 lead to double digits in the final minutes. The CHS junior converted eight of nine free throws while dishing out two assists and coming up with a steal.

Carson Cooley put up 16 points for Southwestern in the losing effort.

The Piasa Birds remain without a win since the night of the county championship game and are now 9-20 on the season with just one victory in six league contests. 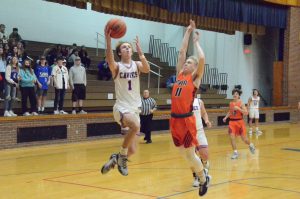 Carlinville’s Ethen Siglock, pictured going in for a layup during a home game against Pana Feb. 11, scored ten points to help lead the Cavaliers to a 44-30 win at Edinburg Feb. 8. Enquirer~Democrat photo by Jackson Wilson.

Carlinville made a non-conference pit stop at Edinburg and picked up a 44-30 win Feb. 8.

After both teams had been separated by roughly one possession for the majority of the game, the Cavaliers buried the Wildcats with a 16-5 run in the fourth quarter.

Aaron Wills led the charge for CHS with 14 points and was backed by a double-digit outing from Siglock (10 points).

Duckels contributed nine tallies, all in the second half, and helped Carlinville stack up its lead by going a perfect six-for-six at the charity stripe in the fourth.

Carlinville hosts Litchfield in a postseason preview Thurs., Feb. 17 at 6 p.m. This is the last game of the regular season. The Cavaliers and Panthers will rematch in regional quarterfinal action at Litchfield Sat., Feb. 19.

Carlinville traveled to Bond County for an SCC dual with Greenville Tuesday. Results will be published in next week’s issue.