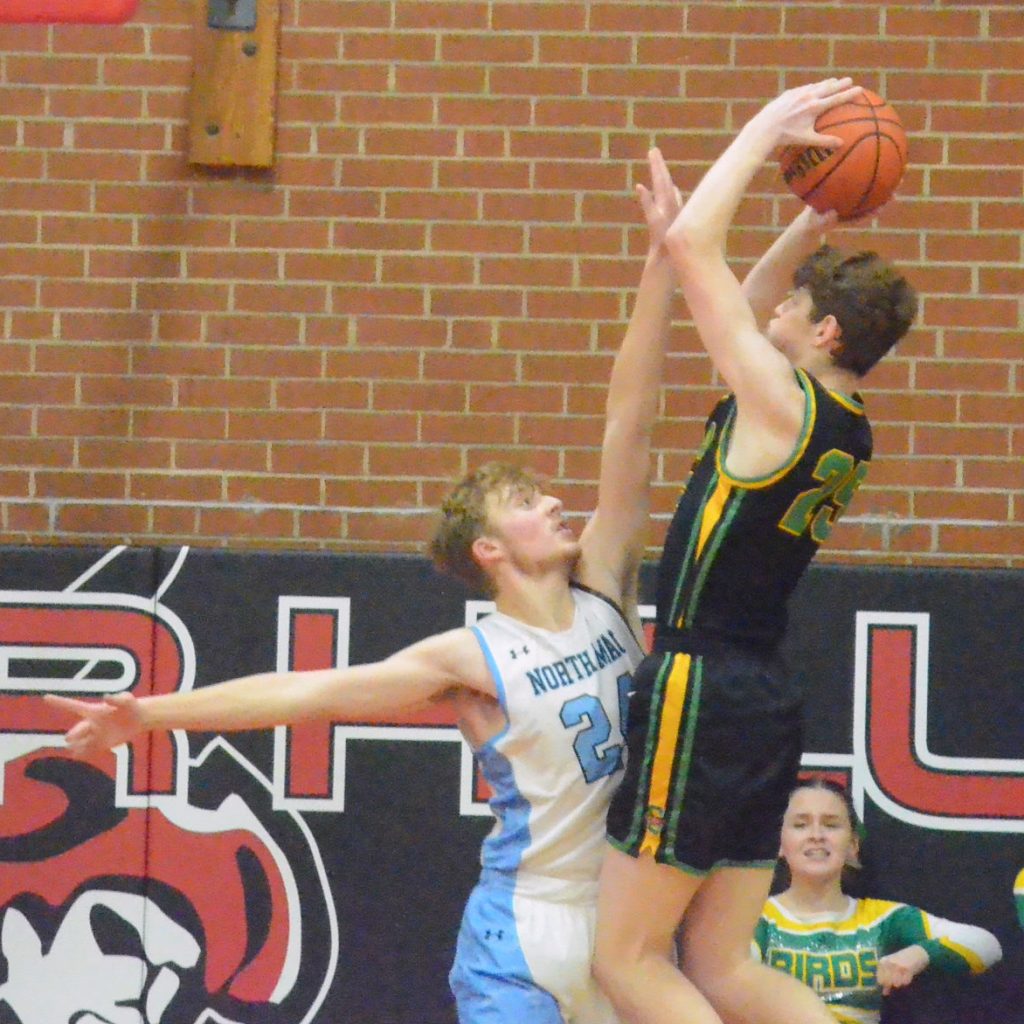 Southwestern’s Ian Brantley rises up for a mid-range jump shot over North Mac’s Mick Downs during the boys’ championship game of the 104th annual Macoupin County Tournament in Bunker Hill Jan. 20. Both Brantley and Downs were named to the All-Tournament team. Enquirer~Democrat photo by Jackson Wilson.

As the final buzzer sounded during the boys’ championship game of the 104th annual Macoupin County Tournament, Bunker Hill’s Hlafka Hall was in a frenzy with both sides celebrating what was destined to be an win for all-time.

North Mac players and students were mobbing J.T. Alexander after the junior had banked in a 75-foot shot at the horn. To the vast majority of attendees, the ball looked to be out of his hands before the clock hit zero. On the other side, Southwestern’s faithful was pleading the opposite case after its team had taken a two-point lead with less than a second remaining.

Though the vast majority of attendees believed otherwise, the ‘all or nothing’ heave was waved off by a trailing official and the Southwestern Piasa Birds repeated as county champions with a 38-36 victory in overtime Jan. 20.

The jubilation was once again stunning but satisfying for Southwestern head coach Jason Darr, who led the Birds to their first back-to-back since 2007 in front of a sell-out crowd.

“Winning the county is always a big deal and we appreciate playing in front of large crowd like this,” Darr said. “This was a great night to be in the building. These kids are going to remember this for the rest of their life.”

The Panthers missed the front end of a one-and-one three times in the final minute, allowing the Birds to stay alive and tie the game on two made free throws by Ryan Lowis in the final seconds of regulation. Wilson also pointed out a previous play in which the North Mac defense unnecessarily fouled on an in-bound.

“You can moan about that last shot all you want,” Wilson said. “But if we take care of our business, we don’t have to worry about a last shot. That game should never have gone into overtime to begin with.”

North Mac expanded on a slim 19-17 halftime advanatage and built a 25-18 lead in the middle of the third quarter but Southwestern, just like last year in Gillespie, refused to die. The Birds flocked back with a 10-2 run and led 28-27 heading into the fourth.

Mick Downs converted a clutch layup to break a 31-31 tie with 1:20 remaining, but the Panthers’ inability to execute fundamentals proved costly. In addition to wasted opportunities at the charity stripe, North Mac failed to secure the biggest rebound of the evening. As a result, Piasa leading scorer Ryan Lowis (13 points) drew a foul and sunk two free throws to force the extra session.

In overtime, Southwestern went up 36-33 on a Lowis free throw and a Rocky Darr mid-range jumper. North Mac finally ended its drought at the line then re-evened the score following a loose ball scramble that led to an equalizing layup from Downs with 22 seconds left. This set the stage for senior captain and All-Tournament honoree Hank Bouillon, who battled his way to the cup and drew a shooting foul 0.8 seconds before the buzzer. Bouillon made both free throws and concluded with 12 points.

North Mac is 9-12. The Panthers scratched and clawed their way to a 47-45 win against Bunker Hill in the previous round.

Braden Buffington may not have been named to the All-Tournament team, but he was definitely the star of the tourney’s final day.

The senior hung a career-best 40 points on the Bunker Hill Minutemen and Staunton cruised to a 56-35 victory in the third place game.

The Bulldogs led 17-5 after eight minutes and maintained that 12-point advantage heading into halftime en route to their eighth win of the year.

Grant Burch was named to the All-Tournament Team for the Minutemen.

Kamryn Link made his anticipated return for Gillespie at the county tournament and helped lead the Miners to a convincing 67-46 victory over Carlinville for fifth place.

Link scored 30 points on ten made field goals and seven successful free throws in the win. The GHS senior came out hot with 17 tallies in the first half, which was dominated by the Miners, 32-16.

Gillespie improved to 4-12 on the season.

On Jan. 18, the Cavaliers defeated the Mt. Olive Wildcats in a consolation elimination dual, 72-56. Dominic Alepra (15 points), Hart (14 points), Trenton Clevenger (11 points) and Matt Dunn (10 points) all etched double figures in the scoring column for the Cavies. The Wildcats, which suffered their 16th loss in 17 games, landed 20 points from freshman Matthew Bywater.