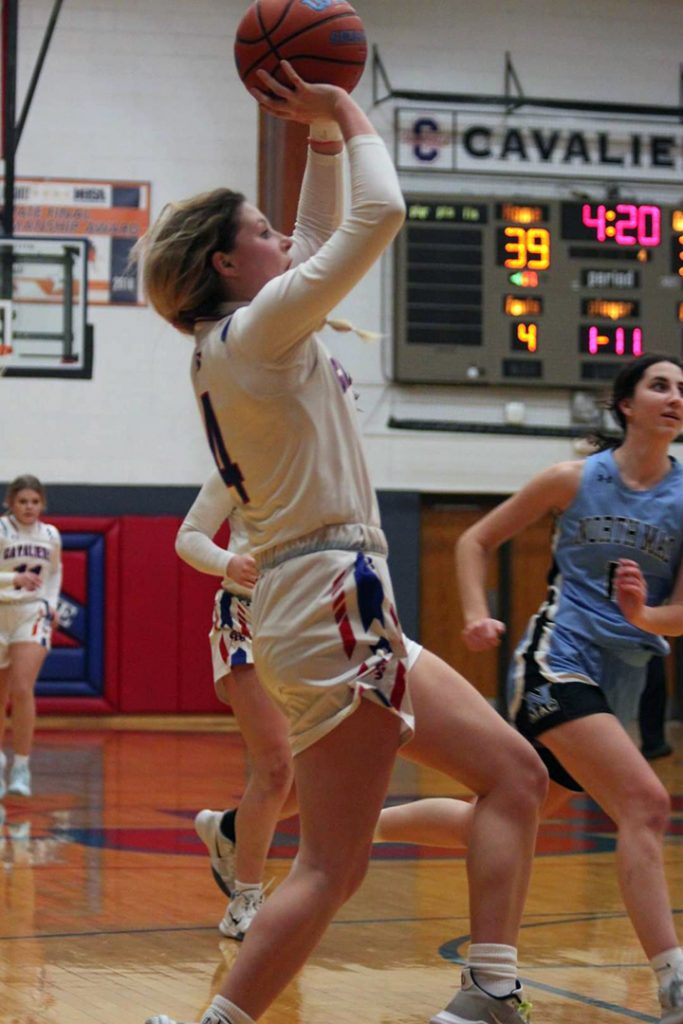 The North sector of Macoupin County is fittingly home to high school girls’ basketball teams trending that direction on a compass.

Both Carlinville and Greenfield-Northwestern came out of the gates rather sluggish in terms of winning consistently. Now, the two squads are beginning to connect the dots.

The Cavaliers defeated North Mac at home for their seventh win in nine contests and the Tigers extended a regular season streak to six victories.

Carlinville’s first South Central Conference victory didn’t come easy at first, but the Cavaliers gave themselves some breathing room with a 13-5 third quarter surge against their newest league rival at the Big House Jan. 5.

CHS, which was toe-to-toe with North Mac the entire first half, built on a slim 22-21 advantage out of the locker room and sealed a 44-34 win to get to 7-9 on the year. Carlinville additionally snapped a three-game conference losing streak.

Isabella Tiburzi scored 17 points while going nine for 11 from the free throw line and was backed by Hannah Gibson, who contributed 13 tallies. Jordyn

With the Carlinville Holiday Tournament excluded from their schedule, the Greenfield-Northwestern Tigers are without a loss since Dec. 8.

Staunton and Gillespie back in win column

Though both programs took a couple of losses as of late, Staunton and Gillespie restored morale with hard-fought wins on the road.

After suffering a 41-34 conference loss at Greenville Jan. 5, Staunton delivered a knockout punch to Auburn, 43-29, on enemy ground for a second victory in as many days Jan. 7. The Bulldogs ended a three-game skid at home against Maryville Christian, 45-28, Jan. 6.

Gillespie pulled ahead of Staunton in the standings by winning 43-33 at Litchfield Jan. 5. The Miners led 23-16 at the half, then widened the gap with a 14-9 run in the third quarter.

Gillespie is 11-8 on the season and off to a 3-1 start in conference play.

Southwestern, Bunker Hill and Mt. Olive in a rut

Southwestern, Bunker Hill and Mt. Olive all hit a rut early in the season and haven’t been able to dig themselves out of it.

Bunker Hill and Mt. Olive have lost six in a row. As with Southwestern, the Minutemaids and Wildcats have yet to remain competitive for an entire game thus far in 2023.

Bunker Hill was trounced by North Mac 62-16 in Virden Jan. 4 and a similar result occured the next night in front of a hometown crowd. The Minutemaids barely cracked the scoring column and lost to Carrollton, 63-8.

All three teams are currently 0-4 in their respective conferences.