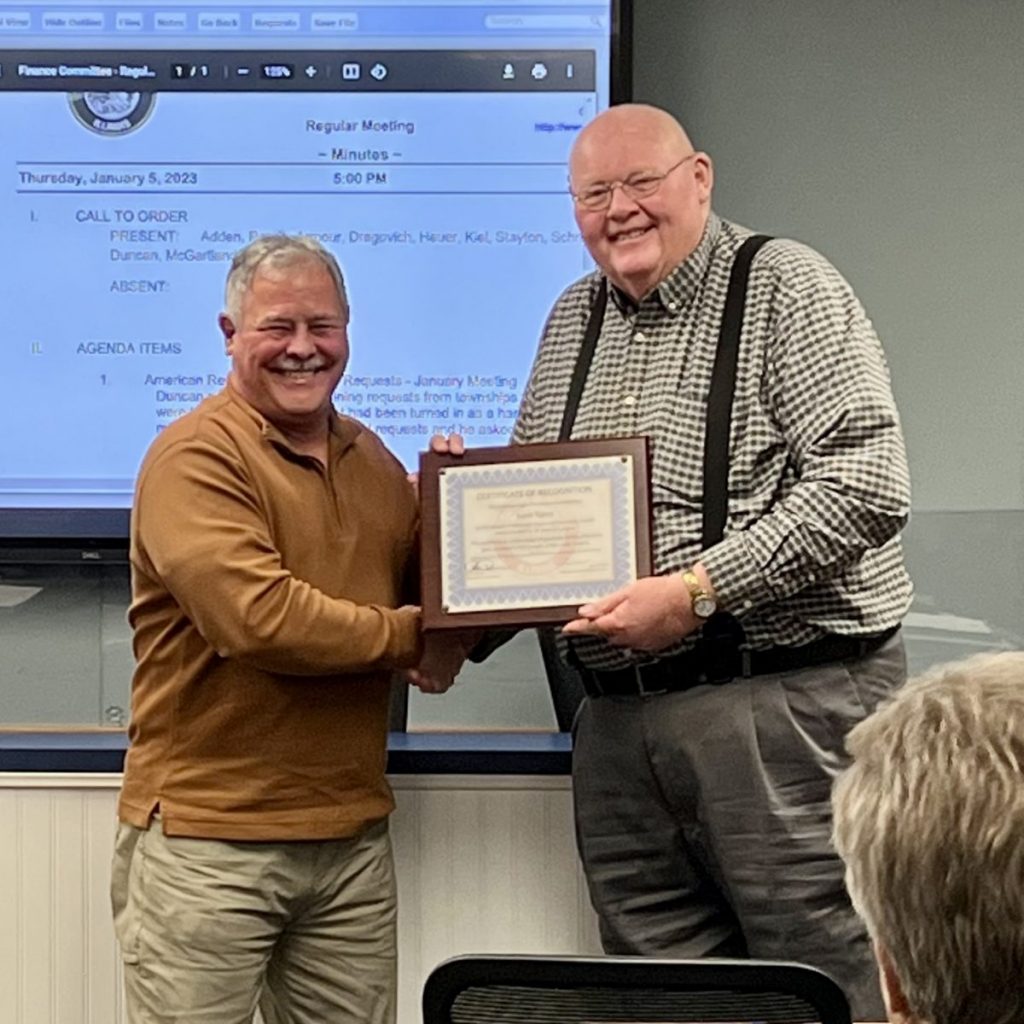 Kent Tarro receives a certificate in recognition of his almost forty years of work at the Macoupin County Public Health Department from County Board Chair Larry Schmidt. Enquirer~Democrat photo by Erin Sanson.

The Macoupin County Board was short one member for its January meeting. Board member Charlie Siegel passed away unexpectedly in December and a new member has not been appointed to the position yet. The board held a moment of silence for Siegel before proceeding with the meeting.

Tarro also introduced his replacement to the board members. After serving Macoupin County for 39-and-a-half years, Tarro is retiring on Jan. 23. He will be replaced by Christy Blank, the Chief Operating Officer of the Public Health Department. Tarro introduced Blank to the board members and praised her, saying he had just a warm up for Blank. Tarro was then presented with a certificate in recognition to his service to the county and applauded by the board members.
Resolution Against “Protect Illinois Communities”

All 17 members of the Macoupin County Board voted to pass a resolution in opposition of House Bill 5855, which was later changed to House Bill 5471, also know as the Protect Illinois Communities Act, which bans the sale or manufacturing of assault weapons and high-capacity magazines in Illinois. The bill also includes a ban on rapid-firing devices and increases Firearm Restraining Orders from six months to one year.

The Macoupin County Board’s resolution states that the board opposes any legislation which would infringe of the right of the people to bear arms. The board orders that Macoupin County shall not support the enforcement of the bill through the use of county funds, appropriations, personnel or property, the board expects all elected officials of Macoupin County to support and enforce their resolution. The board’s resolution also demands the Illinois General Assembly cease further action that would restrict the right of the people to keep and bear arms and demanded the Governor veto all such legislation. Macoupin County Clerk Pete Duncan was directed to deliver certified copies of the Resolution to members of the General Assembly and the Governor’s office. Finally, the resolution demanded the General Assembly repeal the Firearm Owners Identification Card Act.

Before the board voted on whether or not to adopt the resolution, board member Kristi Dunnagan said she was impressed by the other counties who had signed a similar resolution but was most impressed by the Illinois Association of Sheriff’s adopting the resolution. She then asked Sheriff Shawn Kahl whether he supported the resolution in opposition to which he replied, “Yes, I don’t think that’s even a question but, yes.”

The resolution will be updated to add Kahl as a signatory before it is sent to Illinois officials. The motion was approved unanimously, in what Board Chair Larry Schmidt noted was a, “very strong aye.”

In new business, the board members discussed the issues in Carlinville’s cell phone service, particularly from a public safety point of view. Kahl says that he has spoken with a representative as well as Schmidt saying that he had spoken to a cell phone provider representative.

Kahl told board members who were not familiar with the issue that there had been problems with the cell phone service in Carlinville for at least the past five years that the Sheriff’s Department has been dealing with. He felt it has recently gotten worse, disrupting calls to and from emergency services, putting the safety of Macoupin residents at risk.

Kahl and Schmidt both indicated they had been told a new tower would be placed in Carlinville sometime in late 2023. The location is said to be on the north west side of Carlinville, a more specific area was not identified. Schmidt said that he understood that a lease had been signed for the land the tower would sit on.

UK North America was present at the meeting to discuss its plan for a bike trail and solar power electrical transmission lines that run from Montgomery county to Sangamon county. So far the plan is to use an existing path from an old railroad track to place their power lines. Once the lines are placed the company would come back in and pave the path to create a bike trail for recreational use. The bike trail would connect to the existing Sangamon Valley Trail.

After the 55-year time frame, the poles would be removed and the bike path would remain for macoupin residence and others to use.

If the county agreed to the project construction could begin in 2025 and would be finished by 2027 according to UK North America’s estimations. The board members were interested in the idea, but the project is in such early stages that there were many questions left unanswered.

The building and grounds committee was granted the power to act to approve a flooring bid for the second floor of the sheriffs department. The probation office already had their flooring redone, and the rest of the floor now needs to be balanced with that office.

At the first meeting of a new year the Macoupin County citizen’s guide to the Macoupin County Government is updated. Updates in the 2023 version include the contact information for County Treasurer, now held by Amber McGartland. The Freedom of Information Act officers were also updated and can be found on the county website.

Committee assignments were redone. There are four committees with vacant seats which will be filled by Siegel’s replacement once they are selected.

The board approved the American Rescue Plan requests it had received since December’s meeting from the various townships. Townships had until Dec. 31 to submit requests for ARPA funds up to $100,000.

The county board agreed to a partnership with the Macoupin county Farm Bureau to host a second electronic recycling event at a date to be established. The Farm Bureau will be allowed to select the second location.