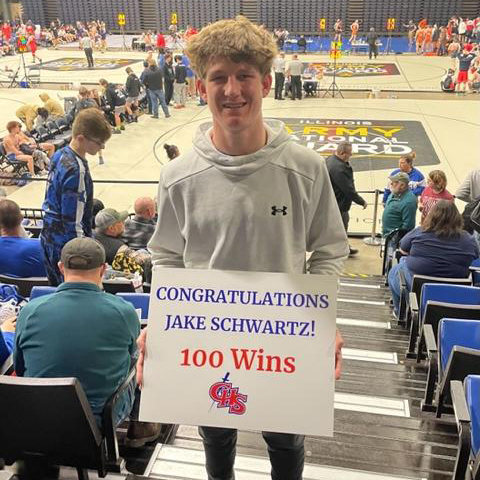 Carlinville wrestling was tested at tough meets over the holiday break, but recorded more impressive results that included a historic career milestone for its team captain.

On Dec. 27 and 28, the Carlinville High School wrestlers took on a meet that many had classified to be “the toughest in the state of Illinois.”

The team lost six of seven matches en route to a seventh place ranking amongst 12 schools in the bronze consolation bracket.

Seven CHS wrestlers competed and four came away with positive records. Each Cavalier earned at least one victory.

Jake Schwartz went undefeated at 7-0 and, in doing so, he raised his arm in trumph for the 100th time in his career.

Ronald LaPlante, who recently won an individual championship at a junior varsity meet, went 5-2 in his weight class.

Konnor Costello and Blake Pruitt each picked up four wins.

Next week, Carlinville is on the road. The Cavaliers wrestle East Alton-Wood River and Vandalia at EAWR Tues., Jan. 11, then travel to Hillsboro the next night to meet the host Hiltoppers and Pittsfield. 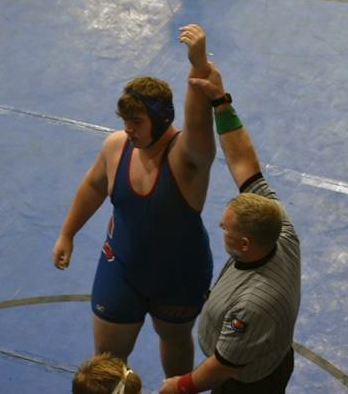 Blake Pruitt raises his arm in victory after defeating his opponent from Dwight at the Abe’s Rumble. Pruitt went 4-3 at the meet and was one of four Carlinville High School wrestlers to finish with winning records. Photo contributed.

Led by first place finishes courtesy of Oliver Dunn and Crosby Michaelis, the Carlinville Wrestling Club finished ninth place out of 55 teams at the Granite City Holiday Tournament over this past weekend.

Thane Peterson pinned three opponents and placed third in his weight class, along with Zeke Watkins.

Andrew Smith also competed for Carlinville and settled for sixth.

The Jacksonville Area Wrestling ‘Battle in the Bowl’ is next up for the CWC. All wrestlers wishing to participate in the Jan. 8 event must pre-register by 11:59 p.m. on Fri., Jan. 6. Entry fees are $25 each. Wrestlers must have a IKWF or USA Wrestling card and head gear. Trophies will be awarded to the top four individuals in the following age divisions: six and under; six through eight; eight through 10; 10 to 12; and 12 to 14. Hardware will additionally be presented to the three best teams. High school students are not allowed to compete in this event. Weigh-ins are from 6:30 a.m. to 8 a.m. on wrestling day. Matches begin at 9 a.m. For more information, call Brexton Hall at 217-370-4705 or Josh Stewart at 217-371-0696. Both individuals can also be reached via email at brextonhall@gmail.com or ammo183@hotmail.com.