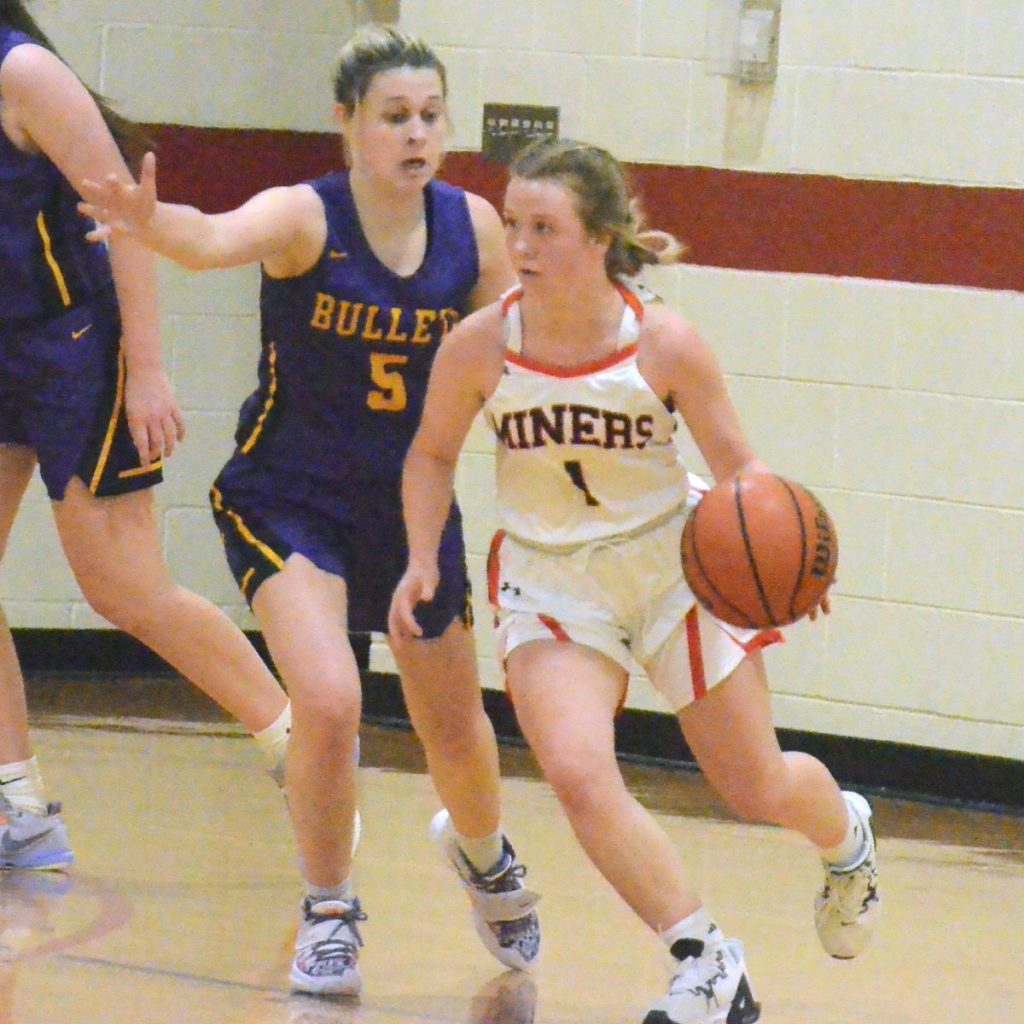 Lauren Bertagnolli scored 11 points off the bench and rallied the Gillespie High School girls to a 52-41 victory over Williamsville on the first day of the 56th Carlinville Holiday Basketball Tournament Dec. 26. Enquirer~Democrat photo by Jackson Wilson.

In 2022, the Miners and Cavaliers have thus far flipped the script, putting themselves in the driver’s seat for at least a spot in the top four.
Though more work was ahead, victories on opening day built a great deal of confidence for both county programs.

Gillespie was down early against the defending champion, but rallied from a nine-point deficit to win.

Carlinville, seeded sixth out of eight squads, was out to plead a case of being underestimated and humbled No. 3 South County in a stunning 44-30 upset.

With Gillespie trailing 14-5 after the tournament’s opening eight minutes, Lauren Bertagnolli came off the bench and buried a pair of threes to help lead a 16-2 second quarter rally.

Bertagnolli, who was coming in off of a career-best 14-point performance against Bunker Hill a few days prior, came away with multiple takeways on defense and finished the afternoon with 11 points as the Miners took down the Bullets, 52-41.

In triumph, all the four-seeded Miners needed was a win over No. 8 Lincolnwood to guarantee a spot in at least the third place contest. In order to play in the big game Dec. 30, Gillespie had to beat No. 1 Nokomis on Wednesday.

The Miners improved to 9-6 with Monday’s win.

For the second year in a row, Waverly South County went into a game favored to beat Carlinville, only to lose.

The sixth-seeded Cavaliers, who had previously stunned South County in regional semifinal action last winter, built up a double-digit lead over the No. 3 Vipers in the second quarter and sprinted to a fourth consecutive victory.

The sophomore trio of Jordyn Loveless, Hannah Gibson and Isabella Tiburzi collaborated for 36 points in the win, which boosted Carlinville’s record to 5-8.

The Tigers, who faced the Bullets in last year’s championship game, were voted as a No. 7 seed this time around.

This meant that Greenfield would have to face a heavyweight right out of the chute.

The Tigers’ first opponent was Calhoun – a fiesty foe that mercilessly pressed from start to finish.

Greenfield-Northwestern held the No. 2 Warriors to a reasonable score, but still lost the game by a lopsided 39-26 margin.

The Tigers got nine points from Naomi Lansaw and eight tallies from Kylie Kinser in defeat.

Audrey Sabol came in red hot for the Redskins and obliterated the Lancers with 31 points.