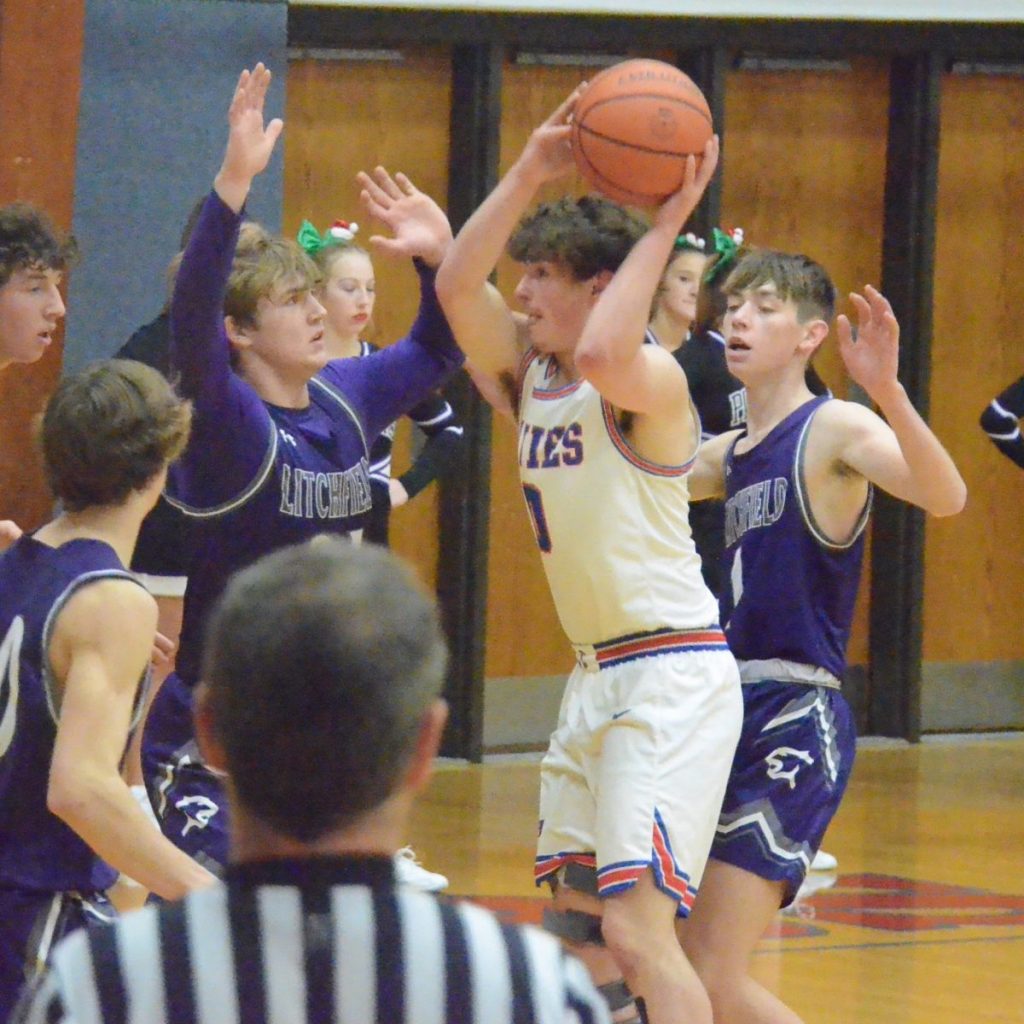 Kolten Costello, pictured during a pool play game against Litchfield at the Carlinville Holiday Tournament Dec. 26, made two clutch free throws in the closing seconds of a Dec. 22 non-conference match against Pawnee Dec. 22. The Cavaliers beat the Indians, 40-39, then lost to Litchfield, 60-39. Enquirer~Democrat photo by Jackson Wilson.

In a rematch of last year’s seventh place game, the Bulldogs proved that they were aiming for a much higher result.

Behind a 27-point masterpiece courtesy of Braden Buffington, fourth-seeded Staunton cruised to a convincing 55-39 victory and leveled its overall record to 5-5.

Brady Gillen provided strong support for Buffington with 15 points, which all came on made field goals from beyond the arc.

The Bulldogs jumped out to an early 17-6 lead over the Warriors in the first quarter and widened the gap to 39-15 at the half.

Staunton was the only county team that celebrated a win on day one of the tournament. Bunker Hill couldn’t make an early lead stick, while Gillespie and Carlinville were overpowered by two of this year’s title contenders.

No. 7 Bunker Hill led for the entire first half and was ahead by as many as eight points, but didn’t have enough fuel in the tank to outlast No. 2 Hillsboro for an upset win.

The Hiltoppers flipped a 25-24 halftime deficit to a 38-33 lead at the conclusion of the third and remained ahead of the Minutemen the rest of the way.

The Minutemen fell to 2-7 overall.

Sixth-seeded Gillespie managed to hang with No. 3 East Alton Wood River for three quarters, but ultimately collapsed down the stretch and coughed up 28 tallies in the final eight minutes.

The Oilers went into battle fully-equipped with speed and consistent firepower at mutiple positions. Three players were in double figures, including Devon Green. The junior point guard led all scorers with 25 points while dishing out 12 assists.

Gillespie, which trailed by six at the half and at the start of the fourth quarter, was led offensively by Bryce Buhs and Tristan Wargo, who both hit a trio of triples. Buhs poured in 15 points and Wargo added nine.

Turnovers had been a glaring issue for Carlinville in the early stages of the season and they once again plagued the Cavaliers in a lopsided battle against top-seeded Litchfield.

Carlinville stayed in the game briefly at the start, but Litchfield unleashed a 20-8 second quarter stun and transformed a slim 14-10 lead into a commanding 34-18 advantage heading into the break.

Keenan Powell torched the Cavaliers with 30 points and was one of two Panthers to bury four long-range shots. A.J. Odle, who was starting in place of Litchfield’s injured point guard Victor McGill, also found the bottom of the net on a quartet of threes for 16 points during the game.