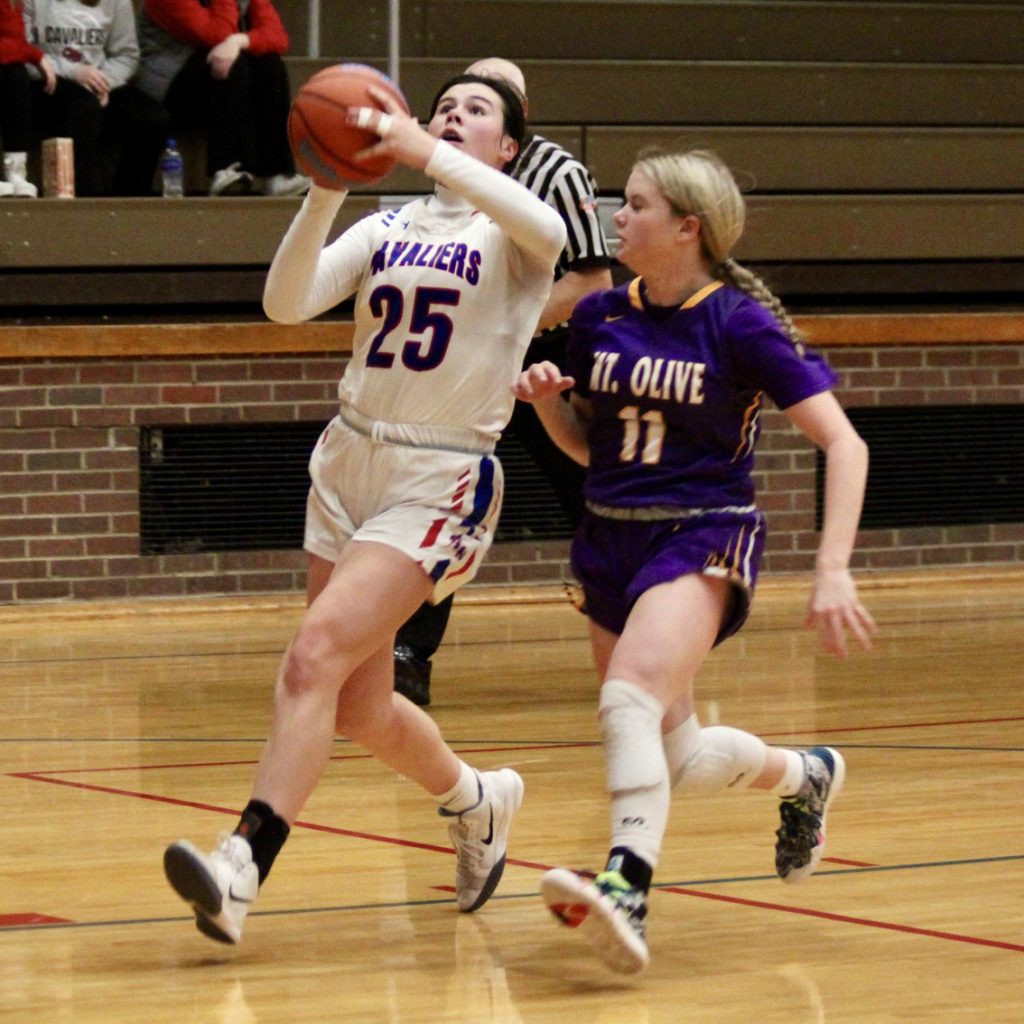 Hannah Gibson, pictured driving to the basket for a layup, was one of four players to tally double figures in the scoring column for the Carlinville High School girls’ basketball team against Mt. Olive Dec. 13. The Cavaliers dominated the Wildcats, 53-23. Photo contributed by Julie Gibson.

In high school girls’ basketball action, Gillespie and Carlinville squared off in another thriller prior to achieving success against other county rivals.

Carlinville and Gillespie met four times last season and all of the games were decided by a single possession in favor of the Cavaliers. The Miners simply couldn’t catch a break.

On Dec. 12, the luck finally shifted in another classic between the Route 4 rivals in ‘The Pit.’

Gillespie defeated Carlinville, 32-31, behind yet another double-digit scoring outing courtesy of Mia Brawner. The sophomore put up 14 points, and posted nine in the fourth quarter after an adverse start.

Gillespie improved to 2-1 in the South Central Conference. Carlinville fell to 0-3.

Emily Schoen and Lauren Bertagnolli each tallied 14 points, with Brawner adding 12, and kept the Miners accelerating in the positive direction at Bunker Hill Dec. 19.

The Miners dominated the Minutemaids, 57-28, and raised their overall record to 8-6.

The Cavaliers returned home Dec. 13 and took care of business against Mt. Olive.

Wiser stayed hot and compiled a game-high 17 points en route to a 53-23 drubbing of the Wildcats.

Three other CHS players hit on double figures as well, including freshman Kaitlyn Reels, who had 12 points and a pair of threes. Tiburzi and Hannah

The Cavaliers picked up another dominant home win Dec. 19 against Lincolnwood.

Tiburzi chalked up 16 points. Jordyn Loveless knocked down seven free throws and connected on a pair of threes for 13 points. Gibson also put forth another double-digit scoring effort with 10 points.

The Panthers stifled the Birds with 12 steals, dominated the boards with 33 rebounds in comparison to the opposition’s 21, dished out 14 assists as a team and led the entire game, which they started out on an 11-0 run.

Southwestern, 1-9 overall, is currently on a eight-game losing streak.