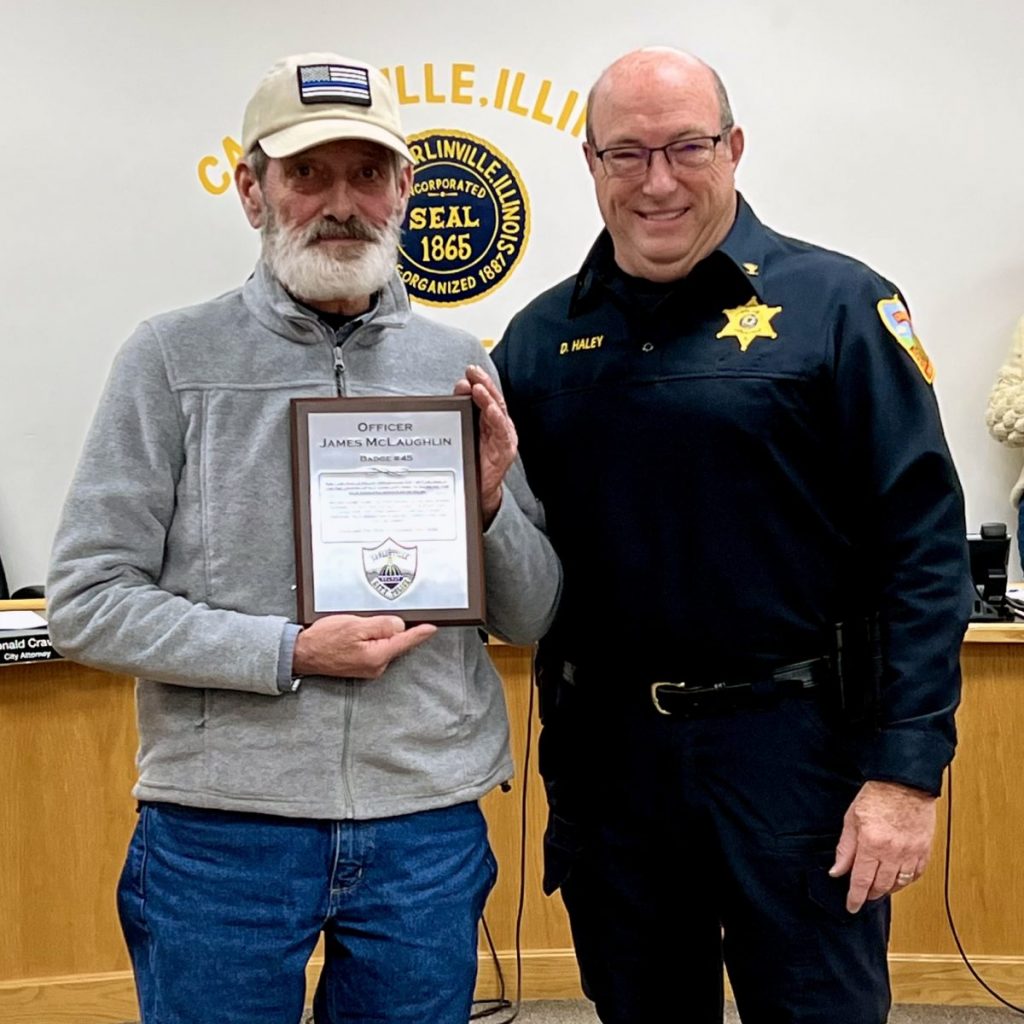 Officer Jim McLaughlin, left, received a plaque of appreciation from Police chief Dave Haley, right, and a standing ovation from the Carlinville Council for his 46 years on the Carlinville Police Department. Enquirer~Democrat photo by Erin Sanson.

The Carlinville City Council held its last meeting of the month on Dec. 19. Two matters of employment were discussed and an employee was honored for his service to the community. The annual audit was also discussed by Angela Verticchio with Fleming Tawfall and the calendar for the 2023 City Council meetings was discussed.

Carlinville Police Officer Jim McLaughlin submitted a letter of resignation to the council. McLaughlin served the city for 46 years as, according to Police Chief Dave Haley, “the High School Parking Lot Czar, and the steadfast corner post for the Lions Carnival and Halloween Parade.” McLaughlin was honored with a plaque from the city for his dedicated work.

The city was presented with a draft statement of the final audit as the accountants at Fleming Tawfall are finishing their final review of the accounts. There were three deficiencies found this year, the same as last year. The first deficiency was a segregation of duties issue, which Verticchio says the council has every year. There is a deficiency around valuing inventory and another deficiency in the bank records and recording to the general ledger.

Verticchio said there were several accounts that were not recorded correctly but were found by the council before April 30. As such, the accounts were reconciled and recorded. The accounts were still not recorded correctly as they were recorded through equity instead of income and expense or other areas where the activity should have shown on the financial statements. Verticchio said about the incorrectly recorded accounts, “hopefully, that will just be remediated already through this coming year.”

The city is close to paying off their EPA Loan and 2003 Bonds. Verticchio says that by the end of Fiscal Year 2025 both the loan and bonds should be paid off.

Alderman Doug Downey provided to the council five suggested updates to the Personnel Handbook. The first update was to change home rule to non-home rule on page two. On page five, the Public Works Director was removed from the list of city department heads and the title of Economic and Zoning Administrator was changed to administrative Coordinator and Economic Development. On page 25, Good Friday, the day after Thanksgiving and Juneteenth were added to the list of approved city paid holidays. Presidents’ Day and Columbus Day were removed from the list. The maximum number of sick days an employee can accumulate was changed from 25 to 75 days, based on the updated contract.

The updates were approved.

There are several dates that the Carlinville council would normally meet that are federal holidays, Mayor Sarah Oswald wanted the council’s opinion on if they wanted to meet on those days still. She also brought up that the council might consider moving to only one meeting a month and call extra meetings as needed. The council decided to table the vote on the issue until the January meeting on Jan. 3, which is a Tuesday. City Hall has Jan. 2 off for the New Year’s Holiday.

The taxes and property of Dugger’s Body Shop has been paid off. There is a bid from Hayes Excavating for $5,518 to excavate the remaining structure. The council approved the motion.