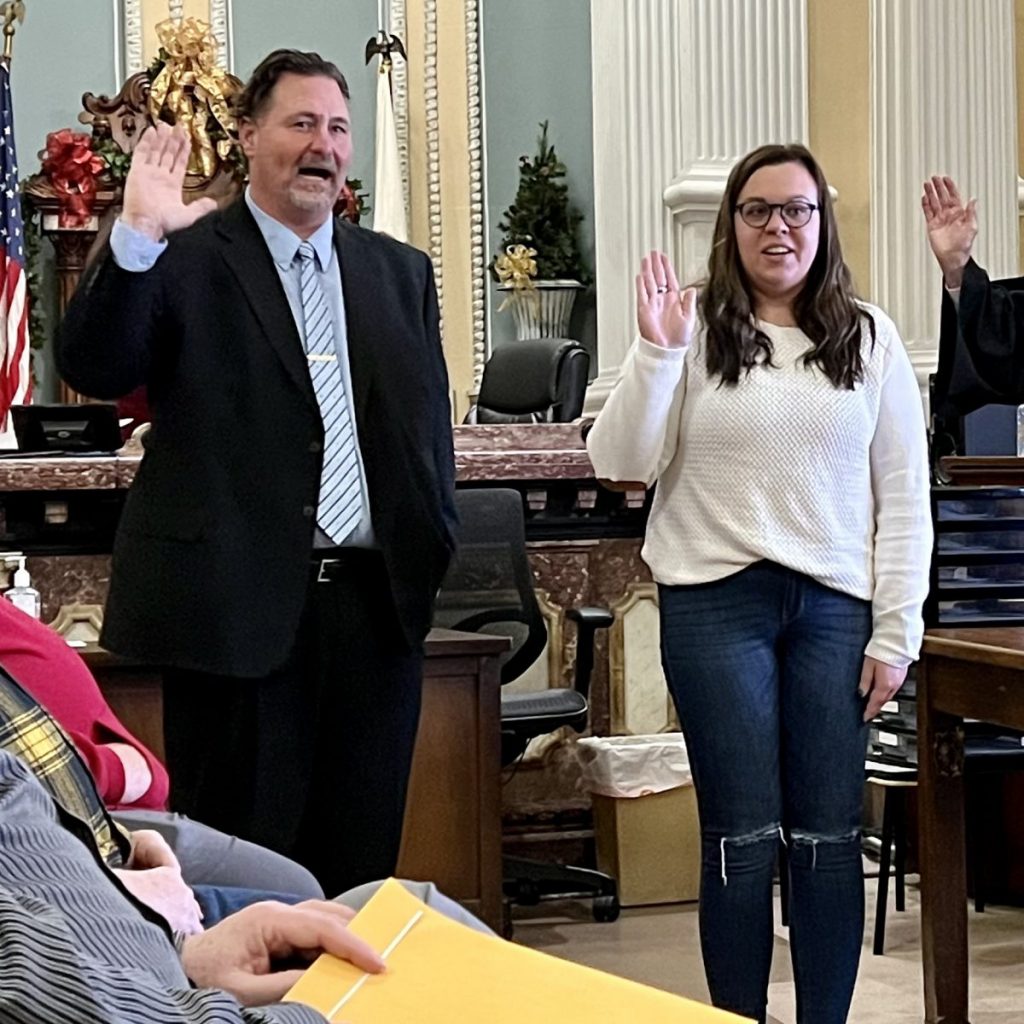 The Dec. 13 Macoupin County board meeting came with several changes in the boards’ makeup as four members retired and three new ones were sworn in.

Each board member took the oath of the county board swearing to uphold the constitution of the United States and the State of Illinois and serve their constituents to the best of their ability. Four new board members were elected in the midterm election, which was held in Nov. Ryan Kilduff, Ross Adden and Leann Barr were present at the meeting and were able to cast votes for the first time following the swearing in. John Blank, the second representative of District Five was not in attendance and therefore unable to take the oath of office.

Following the recently elected members being sworn in, it was time for the board to decide on a Chairman and Vice Chairman of the Board. Todd Armour was appointed as the temporary chair during the election process. Larry Schmidt was nominated to be the Chairman of the board and was the only nomination. Schmidt remains in his position as Chairman. Kristi Dunnagan was nominated to be the Vice Chair of the Board, again there was only one nomination. Mark Dragovich was the previous Vice Chair of the Board.

A resolution to appropriate the County Engineers salary from the Motor Fuel Tax fund was passed.

The board passed an ordinance providing for the levy and assessments of taxes for Macoupin county from Sept. 1, 2022 until Aug. 31 2023. Macoupin County collected $5,217,347 during the 2021-22 fiscal year. Due to PTELL the levy increase can be no more than either 5 percent of the last extension or above the consumer price index and must be the lower of the two figures. This year, the 5 percent increase cap is the lower of the two, meaning the total amount the county can levy is $5,478,214.35. That is an increase of $260,867.35 from last year. Based on the estimated equal assessed value of county property, somewhere near $810,000,000 before any exemptions are taken into account, the tax rate was estimated to be .66 percent, down from .712 percent last year.

The first quarter budget was reviewed by the board. As of November, 23 percent of the budget for the year has been spent, which County Clerk Pete Duncan says is on track.

The board has also receipted 23 percent of what had been projected for the year. Duncan also added an overview of the Animal Control expenses and revenue for informational purposes since there have been multiple issues with the Animal Control Budget recently.

Kent Tarro was a guest at the board meeting to discuss two items related to the Public Transportation System, which the Health Department runs but is the County Board’s program.

Tarro first asked for guidance from the board don the Public Transportations Policy of riders being responsible to get to the vehicle themselves. Several workmen’s compensation cases have come up after drivers were injured while trying to help passengers from their homes to the bus. Tarro said the Policy was only to provide a curb to curb service, not door to door, but there are constant issues with clients not being able to get to the curb.

Tarro also discussed a potential contract with the Montgomery County Public Transportation Program which could make transportation for both counties more efficient.

William McClain was thanked by the board for his donation of an antique clock to the main court room. The donated clock is approximately 125 years old and more appropriate to the era of the courthouse than the previous clock.

The American Rescue Plan requests for December were granted.

The Macoupin County board agreed to hold another electronic recycling event set for Sept. 30, 2023. There will be one event location in Carlinville.

Preliminary engineering agreements for four bridges were approved by the board.

A potential franchise agreement for Broadband Expansion between Charter Communications and the County was tabled so State’s Attorney Garrison could have more time to review the contract.

The Special Service Area #2 annual audit was received and approved by the board.

The board agreed to dispose of board recording from at least 18 months ago, meaning any records dated before June 2020 could be disposed.

The Jail and Detention Standards unit Annual Compliance review was placed on file by the board. Several improvements were noted on the review since the last time the review had been performed. The jail was in full compliance with Illinois Standards.

The County Board dates for 2023 were set. All meetings will be held the second Tuesday of the month at 6 p.m. except for the April 2023 meeting due to a conflict with the annual township meetings. The April meeting will be held on Thurs., April 13 so all board members may attend.