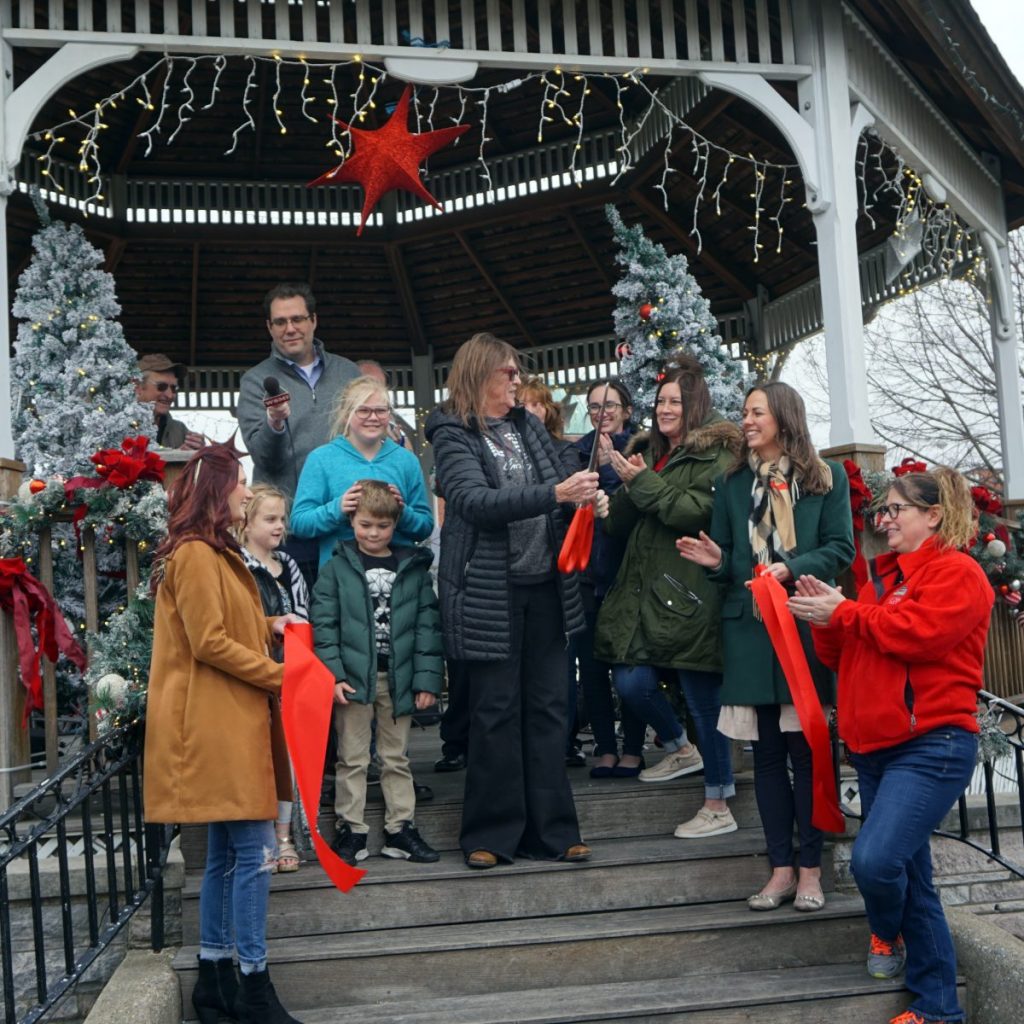 Carlinville Mayor Sarah Oswald was joined at the gazebo by her three grandchildren, members of the City Council and members of the Carlinville Chamber of Commerce to cut the ribbon, signalling the official opening of Christmas in Carlinville. Enquirer~Democrat photo by Erin Sanson.

Christmas in Carlinville officially opened on a windy Dec. 2 at 12 p.m. A ribbon cutting ceremony was held at the gazebo, opening the event located on the Square. The wind slowed down tent set up slightly, but everything was put together by the end of the day.

Such a windy day was not enough to keep the people away from a beloved Carlinville tradition and the long list of activities at the Carlinville Square was right on schedule. A petting zoo was available on Dec. 2 and Dec. 3. On Dec. 4, a Pet Parade took the petting zoo’s place on the northwest corner of the Square. In the southwest corner, Chef Bananas kids show provided entertainment to people of all ages.

Fire truck rides were being offered for only $1 by the Carlinville Fire Protection District, which played Christmas carols as it drove along. Music featured prominently on the Square with bands, singers and carolers serenading shoppers all weekend.

The Marvel Theater offered two free movies on Dec. 3 only. Elf was shown at 11 a.m. and Christmas Vacation was played at 9 p.m.

The Macoupin County Courthouse was on display once again as Andrea Duncan offered tours of the building decorated for Christmas.

Besides the various restaurants located on the Square, several vendors had food trucks set up to sell their fares. Off the Wall had a Taco Truck next to CNB and Starr’s Primal Meats was grilling in the southeast corner of the Square. There were also two kettle corn stands on opposite sides of the Square, filling the air with their sweet smelling food.

Of course, it can hardly be Christmas without a visit from Santa to his house in Downtown Carlinville. Santa was available to listen to kids Christmas lists multiple times throughout the weekend.

With close to 40 vendors located in the tent and the shops around the Square, downtown Carlinville was buzzing with activity. A trolley stop was located outside the Loomis House picking up and dropping off shoppers and whisking them away to one of the other Christmas in Carlinville locations.

The Anderson Mansion was open for visitors as well beginning at 1 p.m. and lasting until 9 p.m. The Red Barn sold beef stew, shepherd’s pie, cranberry salad, pies, bread pudding, wassail, coffee, water and soda all weekend. The out buildings were open as well, including the blacksmith shop, the general store and the print shop. Inside of the Ruyle Building were a variety of handicrafts. The mansion was open for tours throughout the weekend with each room decorated to show off its “traditional Christmas” theme.

Reactions to the Christmas in Carlinville event from city officials were nothing but good. Chamber of Commerce Executive Director and City Administrator Brian Zilm said about the event, “I think year one for Christmas in Carlinville was a hit. When you’re organizing an event of this magnitude there is always going to be at least one hiccup along the way and the wind on Friday and Saturday morning proved to be it this year. The town was buzzing though and everyone really seemed to take advantage of the transportation amongst the locations.”

About future events, Zilm says, “The ground work has been put in place to grow this event even more for 2023. I look forward to the possibility of expanding Carlinville Plaza as a destination and possibly bringing in Blackburn as a new location to add into the mix. There’s a lot of room to expand and take this event to the next level.”