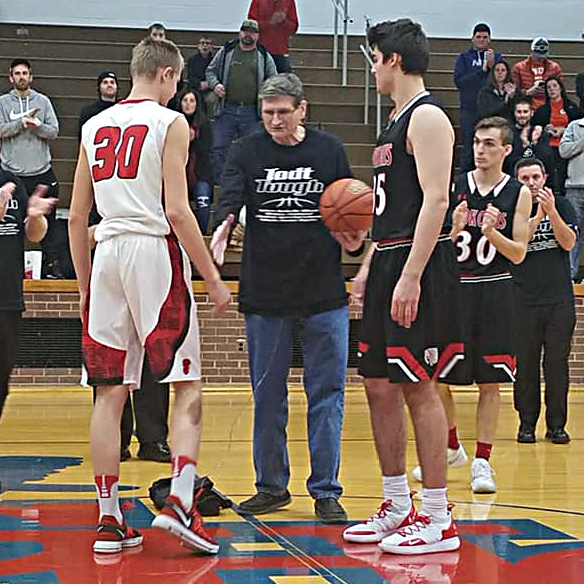 Terry Todt, the long-time voice and popular figure of WSMI FM 106.1 Radio, takes part in a ceremonial tipoff prior to a game between Staunton and Nokomis at the first annual Terry Todt Shootout vs. Cancer at Carlinville High School in 2018. This was the only occurance of the event that Todt was alive for. The 40-year broadcaster passed away after a long battle with appendix-based cancer five months later. Enquirer~Democrat file photo by Jackson Wilson.

Several area high school basketball teams will participate in a 16-team shootout to honor the legacy of a beloved area broadcaster.

The fourth annual T. Todt Shootout vs. Cancer event will be held Sat., Dec. 10 at Hillsboro High School, and will feature five boys’ and three girls’ games. Tickets are eligible all day and are $5 for adults, with $2 for children.

First held in 2018, the event celebrates the life of Terry Todt, the longtime sports director at WSMI Radio, who died in May 2019 after a long battle with a debilitating form of appendix-based cancer.  He was survived by his wife, Brenda, and their two children.

The shootout is organized by Tim Mize, one of Todt’s co-workers at WSMI.  All eight games will be broadcast on WSMI 106.1-FM and online at wsmiradio.com.

All proceeds from the event will benefit the Montgomery County Cancer Association, an organization that supports cancer victims and their families, and was highly important to Todt.

“The T. Todt Shootout vs. Cancer celebrates Terry’s love for high school hoops, and it’s become a really special event for everyone involved,” said Mize. “It’s a way to celebrate what Terry meant to all of us.”

The shootout begins at 9:30 a.m. with a girls’ game between Gillespie and Lincolnwood, followed by a boys’ game between Staunton and Edinburg at 11 a.m.

Carlinville teams will play in the next two games, starting with a boys’ matchup against Arcola at 12:30 and a girls’ game against Nokomis at 2 p.m. The Nokomis boys then play North Mac at 3:30 p.m.

Evening games include a Hillsboro doubleheader as the Hilltopper boys take on East Alton-Wood River at 5 p.m., with a girls’ game against Litchfield at 6:30. A boys’ game between Lincolnwood and Litchfield at 8 p.m. will conclude the schedule.

Special raffles will be held throughout the day, with prizes including a puck signed by St. Louis Blues center Brayden Schenn and a replica of the championship ring from the Blues’ Stanley Cup season in 2019. Other prize drawings include four tickets to the Illinois men’s basketball home game against Minnesota on Feb. 7 and four tickets to a St. Louis Cardinals’ home game.