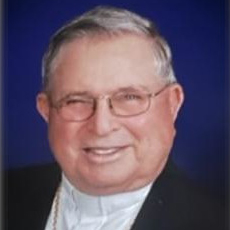 Walter is survived by his wife of 71 years, Helen Jo Ann Byerley (nee Wayland) whom he married on Aug. 12, 1951, at St. Paul’s Lutheran Church in Columbia.

Walter enlisted in the United States Air Force in 1951 and after completing a tour of duty in Korea he attended the Air Force’s Officer Candidate School at Lackland Airforce Base in Texas graduating in 1957 . Walter and his family enjoyed posts across America and Italy and, after proudly serving his country for 20 years, Walter retired with the rank of Major.

He then felt called to the ministry, graduated from Concordia Seminary in St. Louis, and served as a Lutheran pastor in churches in Gillespie and Farmersville.

Walter was preceded in death by his parents, Luther C. and Bertie V. (Snelson) Byerley of Dupo; brother and sister-in-law, Roger and Mary (Laurent) Byerley and brother Richard Byerley.

In lieu of flowers donations may be made to: Hospice of Southern Illinois, or to your church of choice.