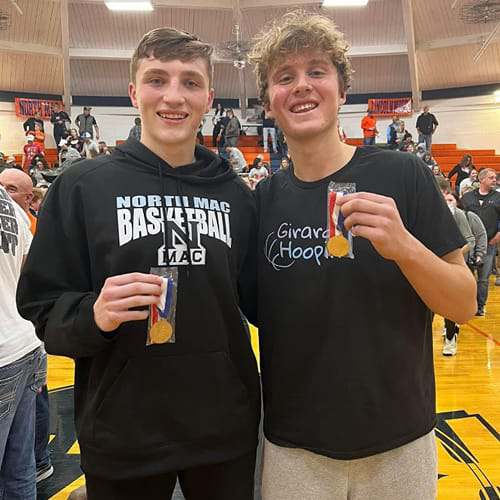 North Mac’s J.T. Alexander and Mick Downs were named to the All-Tournament team at the New Berlin Turkey Tip-off over Thanksgiving. The Panthers placed fourth overall with a 2-2 record. Photo courtesy of the North Mac CUSD No. 34 Student Athletics and Activities Facebook page.

To tip off the high school boys’ basketball season, Greenfield-Northwestern and Bunker Hill logged victories in their season openers, while Southwestern and North Mac competed at tip-off tournaments over the holiday break.

Both Greenfield-Northwestern and Bunker Hill didn’t have much trouble in putting away their opponents and earning an undefeated start.

Bunker Hill jumped out to a 16-9 first quarter lead and consistently expanded the advantage, winning all four quarters en route to a 69-42 victory at FBA O’Fallon Nov. 21.

The Tigers and Minutemen met head-to-head at Bunker Hill Nov. 29. Coverage will be featured in next week’s issue.

Bunker Hill, which played host to Staunton Nov. 30, will continue its first homestand Tues., Dec. 6 against Christ Our Rock of Centralia.

North Mac split four contests and walked away with fourth place at the New Berlin Turkey Tip-off. The Panthers started 2-0 with victories over Meridian and Lincolnwood, then dropped the next two contests against the host Pretzels and South County Vipers. Mick Downs and J.T. Alexander were named to the All-Tournament team.

Southwestern traveled to Carrollton Nov. 29 and will rematch Roxana in Piasa Fri., Dec. 2 before heading back out on the road to Calhoun Sat., Dec. 3 and Wesclin Tues., Dec. 6.

Though Madison was a tough opponent, the Staunton Bulldogs were hoping for a better result than what they got in their season opener Nov. 22.

Staunton struggled to contain the visiting Trojans and was handed a 71-37 defeat on its home floor.

The Bulldogs, which looked to rebound at Roxana Nov. 29 and Bunker Hill Nov. 30, battle East Alton-Wood River on the road Tues., Dec. 6.