On Nov. 20, the Carlinville High School cross country team held its ‘end of season’ awards’ banquet in the CHS cafeteria.

Nearly every athlete was in attendance, with the exception of a couple that had to isolate due to illness.

As a collective, the cafeteria was packed and ‘the team had a great turn out,’ according to head coach Charlie Helton.

Before honoring individual milestones, Helton gave a brief recap on a couple of team victories from the fall.

This season, both Carlinville teams won the Carrollton Invitational. At the tough Carlinville Invite, the boys ranked runner-up and a much larger and improved girls’ squad finished third. The boys additionally brought home a South Central Conference championship and the girls gave a valiant effort, finished second only to Litchfield.

“The team season was so successful that each athlete received a letter or a participation award,” Helton said. “That is quite an accomplishment for 30 team members.”

The team also recognized Wilson for his recent Eagle Scout project in which he built a bridge that helped utilize runs at Beaver Dam.

“He also had help from many in the crowd and appreciates their efforts as well,” Helton said. 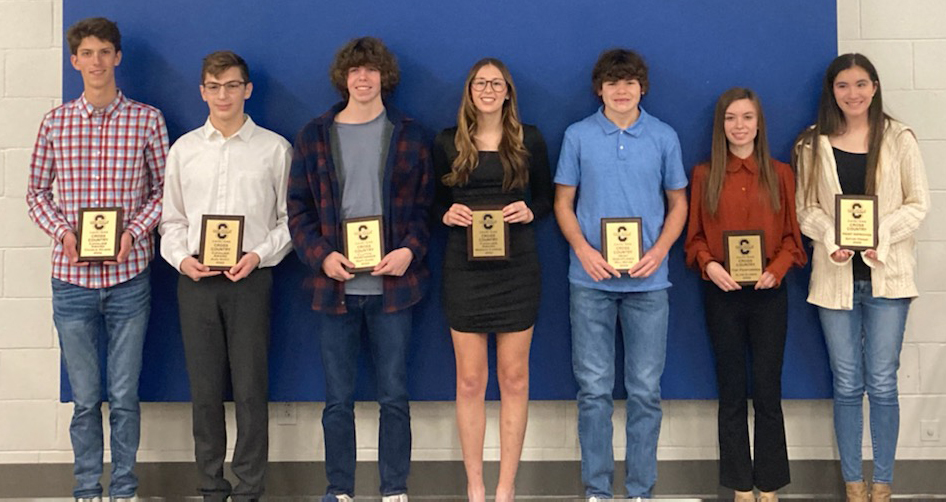 Alton Roadrunners’ Runners of the Year

Carrino and Dunn have been selected to represent CHS at a Bluff City Grill dinner in Alton Sun., Dec. 4. They will be joined by athletes from 14 other local schools that shared the honor of Alton Roadrunners’ Runners of the Year. Each honoree will be commemorated with First to the Finish merchandise and a plaque.