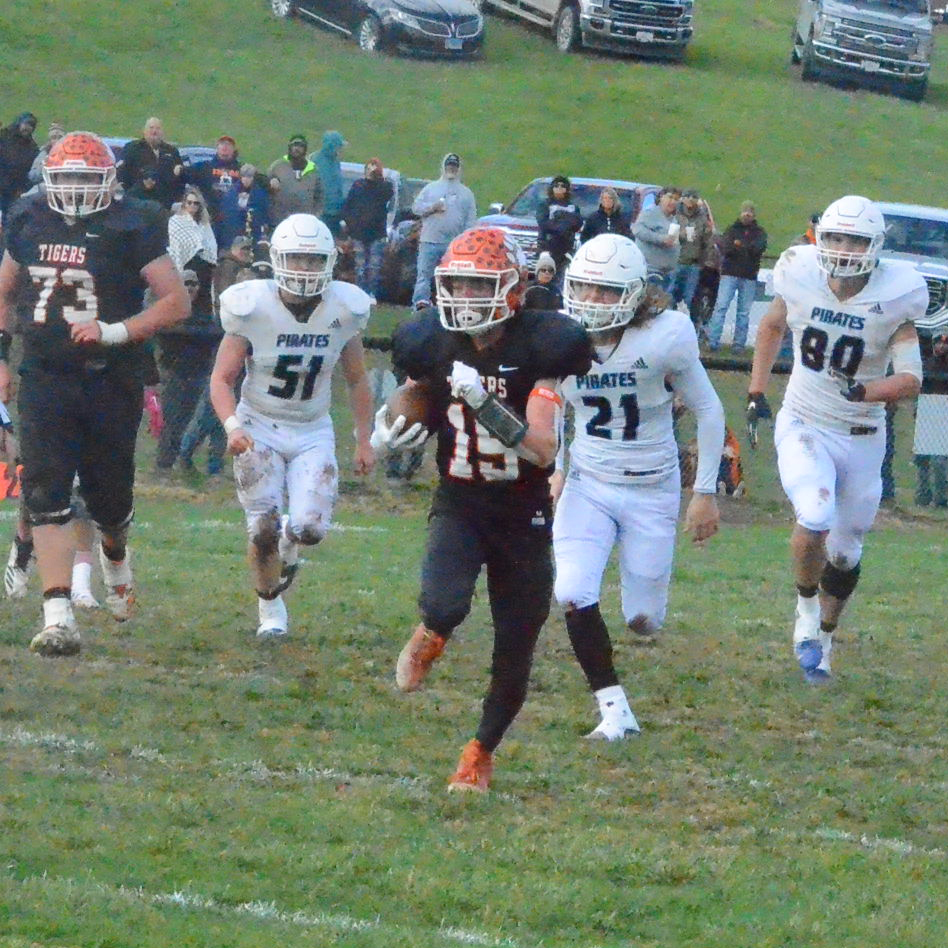 Kohen Vetter, pictured making his way to the end zone on a 67-yard touchdown rush against Cumberland in the second round of the IHSA Class 1A playoffs, pulled in a pair of interceptions and finished with 142 yards on 21 rushes to lead the Greenfield-Northwestern football Tigers into the Elite Eight. Enquirer~Democrat photo by Jackson Wilson.

On a cold, cloudy and windy afternoon in their home valley, the Greenfield-Northwestern Tigers blew out the fire of a hot Cumberland squad, 26-0, in the second round of the Illinois High School Association playoffs Nov. 5.

The Tigers became the first team to keep Cumberland off the scoreboard in 43 weeks and snapped a seven-game winning streak for the Pirates. En route to a third shutout on the season, the Greenfield-Northwestern defense held the opposition to 99 total yards. The Tigers have allowed less than 10 points per contest while outscoring opponents by a lopsided margin of 412-94.

Greenfield-Northwestern, which has formed a co-op with athletes from the northern Macoupin County town of Palmyra, celebrated the program’s first trip to round three since 2007.

The Tigers are penciled in for a state quarterfinal showdown against undefeated Camp Point Central in hostile territory this weekend.

The windy and chilly conditions were knocking down passes early, so the tone was bound to be set by whoever could generate momentum via the run game. Kohen Vetter delivered big time for the Tigers on a 67-yard touchdown rush to put GF-NW in the lead at the start of the second quarter after he had spoiled a lengthy Pirates’ scoring pursuit on an interception. Vetter ended the day with 142 yards on 21 rushes and had a pair of takeaways.

Brett Bilbruck, who blocked for Vetter on the opening touchdown, added 101 yards on 24 carries.

Leading 12-0 following the intermision, the Tigers put the game away with a 12-play 65-yard scoring drive that ate up six minutes of the clock to begin the third quarter.

Vetter came down with his second pick at the Cumberland 30 on the ensuing drive and the Tigers piled on nine plays later. Quarterback Dylan Pembrook created a fresh set of downs on a 10-yard fourth-and-three scramble into the red zone, then Bilbruck punched in his second touchdown of the afternoon from the two-yard hash.

The Tigers failed to cap off another lengthy drive for a score as they turned the ball over on downs following a Cumberland goal line stand in the late stages of the fourth. However, the effort was far from in vain, for it lasted seven minutes and eliminated all hope for a Pirates’ comeback.
Greenfield-Northwestern is 10-1 on the year. The Tigers have outscored their first two playoff opponents, 64-7.