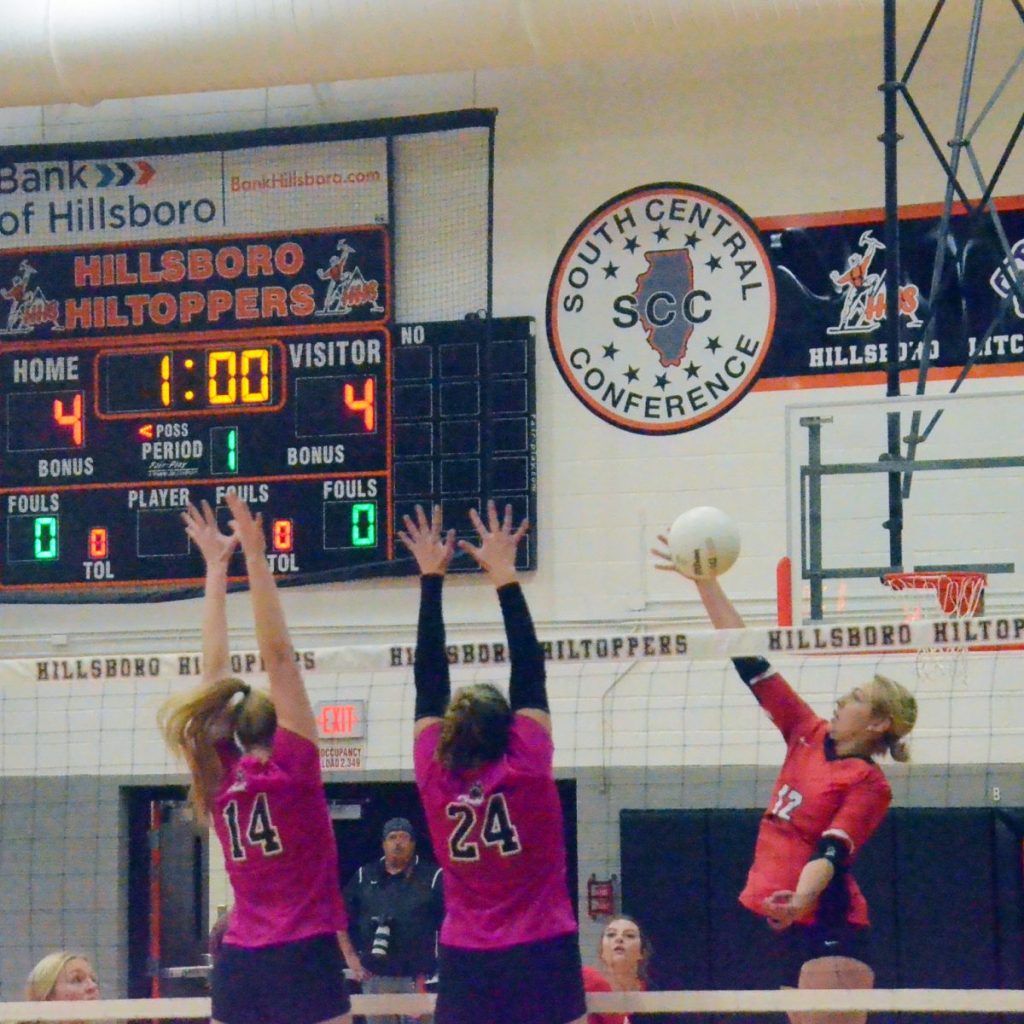 Haris Legendre had 23 kills in two playoff games for the Staunton High School volleyball team at the IHSA Class 2A Hillsboro regional. The Bulldogs straight set Hillsboro in the semifinals but lost to Breese Central in the championship. Legendre, a graduating senior, became the first player in SHS volleyball history to surpass 1,000 career kills this season. Enquirer~Democrat photo by Jackson Wilson.

Staunton and Greenfield-Northwestern both fell one win shy of a regional title in the Illinois High School Athletic Association playoffs last week.

Staunton lost to Breese Central in Hillsboro and Greenfield-Northwestern was overpowered by Lincolnwood in Raymond.

Despite having to play on the Hiltoppers’ hardwood, No. 3 Staunton was in command from the outset against No. 6 Hillsboro in Class 2A semifinal action, Oct 25. The Bulldogs were on the opposing side of a similar result in the title game Oct. 27.

No. 2 Breese Central, who had previously destroyed No. 9 Carlinville 25-4, 25-11 two days prior, wouldn’t be denied in a redemption match. Staunton was looking to knock off the Cougars in postseason action for the second year in a row, but couldn’t repeat the outcome of a 2021 sectional semifinal victory. The Bulldogs hung tough early but a celebration just wasn’t meant to be this time around. The Bulldogs season ended with a 20-25, 14-25 loss.

Staunton went 29-8 this season and swept its way to another South Central Conference title. The Bulldogs additionally had some individual milestones to cherish, including 1,000-plus career kills for senior captain Haris Legendre – the first player in SHS history to surpass that particular mark.

Greenfield-Northwestern, Mt. Olive and Bunker Hill represented the county at the IHSA Class 1A regional in Raymond.

Mt. Olive and Bunker Hill both tapped out in the quarterfinals. The Wildcats were doubled up by Franklin 13-25, 13-25, and finished 3-27 on the year. Greenfield-Northwestern and Bunker Hill battled head-to-head and the Tigers sent the Minutemaids packing with a 25-20, 25-16 victory. Bunker Hill concluded the season 10-20 with the loss.