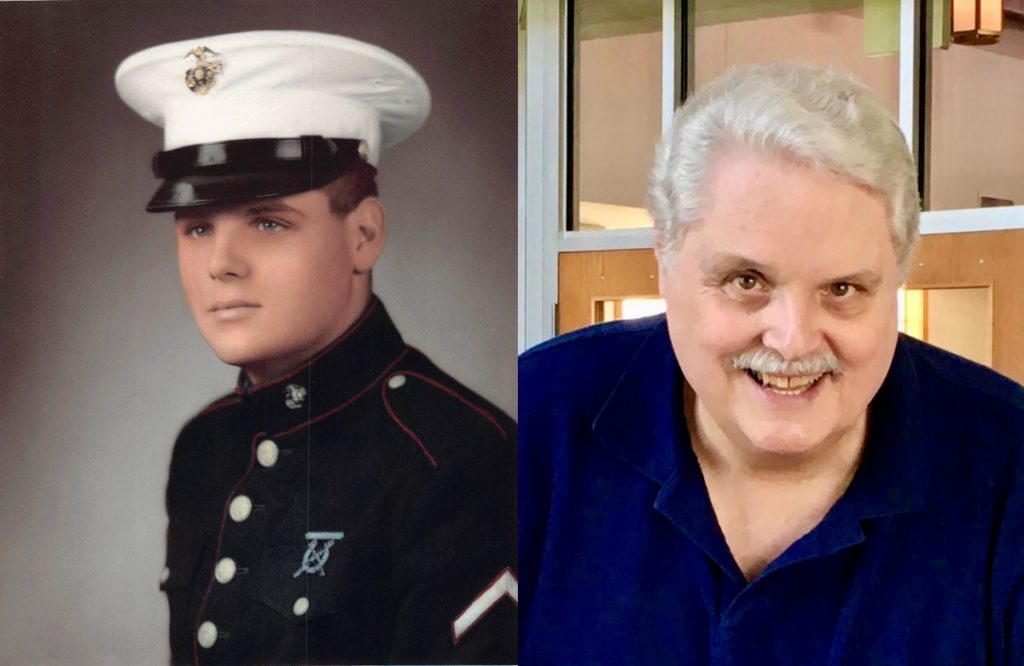 Ted graduated from Gillespie High School in 1963 and attended Southern Illinois University in Edwardsville before bravely answering the call of his country to join The United States Marine Corps in 1965, where he served in ‘America’s Battalion’—The Trinity — 3rd Battalion, 3rd Marines. Fortes Fortuna Juvat – Fortune Favors the Brave.

He was deployed to Viet Nam in 1965, where he served valiantly protecting his brothers-in-arms in Chu Lai and Da Nang in central Viet Nam.

His service to his country was dually a great sense of personal pride and the continuance of a proud family tradition, with his father serving in WWII and his grandfather in WWI.

Upon returning from the Viet Nam War, he began work as an architectural draftsman/estimator in St. Louis, where he later retired.

More than work, he enjoyed most his many hobbies and especially time with his family. He always chose family over material gain and made incredible effort to be at every event to support his ‘kids’. He truly understood the value in quality time and unconditional love.

He was an incredibly gifted musician. He began playing piano at age six and never stopped. Ray Charles was a great inspiration to his music, among many others. His favorite song was What’d I Say.

He also played guitar and keyboard for many years in the local band Fat Chance, which had recently returned from retirement. He said he was like ‘A kid in the candy shop,’ having the opportunity to entertain the audience once again.

He enjoyed hunting, fishing, playing, and watching football and baseball. He was an avid fan and could often be found on gameday tailgating the Illinois Illini, St. Louis Rams, and St. Louis Cardinals.

He always had a passion for vehicles, reminiscing often of his Yellow Corvette Stingray and later picking up the Harley-Davidson motorcycle at age 50. He most recently acquired and had been restoring a beautiful 1969 Buick Riveria GS – His dream car.

He was a brilliant mind, and always up for an intellectual spar—especially if it had to do with politics, history, militaria, or strategy.

He was a lifelong learner and had the great fortune to travel to many of the historic sites he loved learning so much about. He especially loved having the opportunity to attend many USMC reunions and spend time with his dear friends locally.

He was also a member of Gillespie’s Zion Lutheran Church—a church co-founded by his great-grandparents.

Burial will follow at the family plot located within Gillespie City Cemetery.

Memorial contributions may be made to the American Heart Association, Wounded Warrior Project, or a charity of the donor’s choice in honor of Ted’s passions.