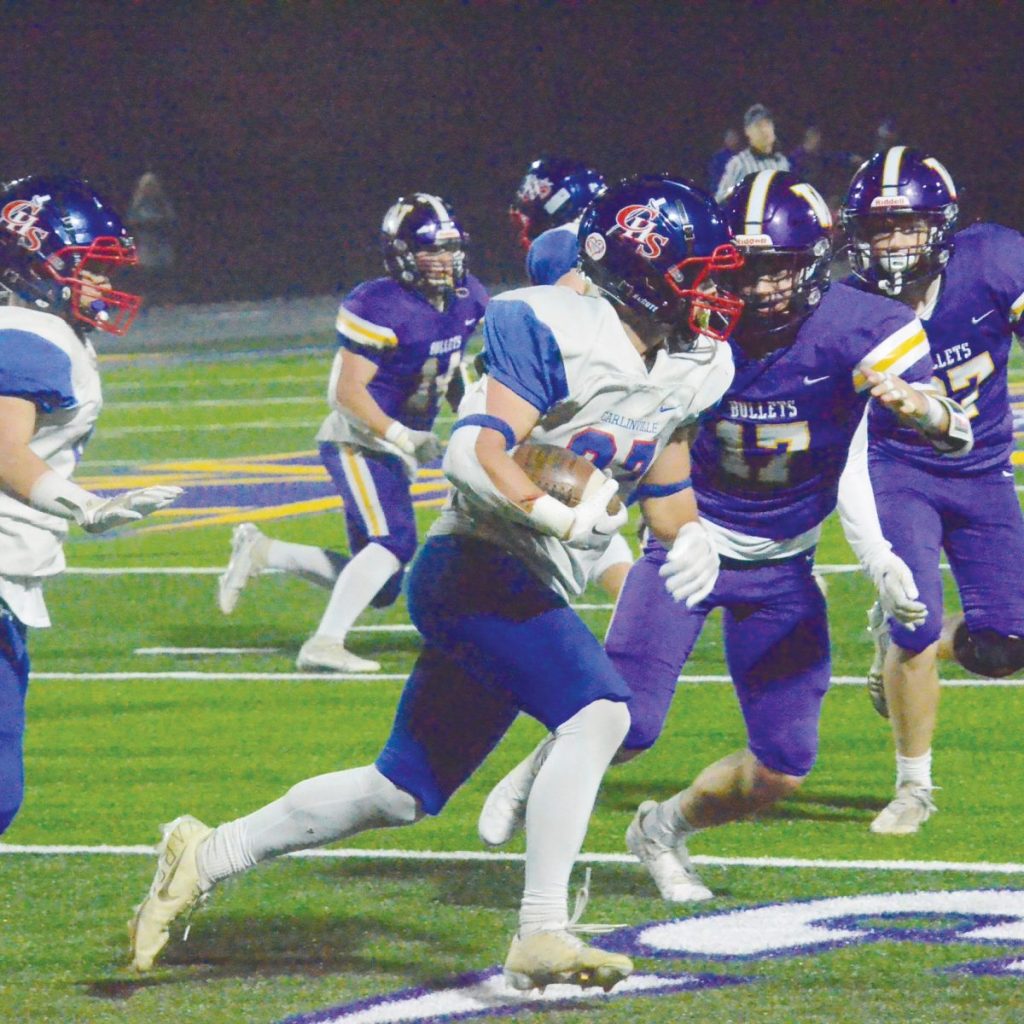 Jack Rouse ran for 73 yards on 23 carries and scored three touchdowns for the Carlinville High School football team in the first round of the IHSA Class 3A playoffs at Williamsville Oct. 29. The Cavaliers season ended with a 48-20 loss. Enquirer~Democrat photo by Jackson Wilson.

The Carlinville High School football team had a 13-6 lead at the end of the first quarter, but reality came crashing down at the speed of a bullet (specifically a Williamsville Bullet) on the road in Sherman Oct. 29.

In the first round of the Illinois High School Assocation Class 3A playoffs, the Cavaliers were unable to get a third victory over Williamsville in seven years and finished the 2022 season 5-5 following a 48-20 loss.

“We knew coming in that they had a ton of weapons and that we were going to have some matchup problems against their receiving core,” said CHS head coach Chad Easterday. “We tried our best to slow the game down and it worked for a while. We at least kept them reeling for a while.”

That receiving core that Easterday spoke of before and after the game produced 212 yards on just 10 catches, with half of those throws resulting in touchdowns.

Williamsville quarterback Jake Seman didn’t have the most efficient game in terms of passing percentage (50), but he was still dropping deep dimes all night, especially when the Bullets regrouped for the second quarter. Zach Reels intercepted him on a ricocheted ball that was deflected by Jake Schwartz to set up Carlinville’s go-ahead scoring drive early and the Cavaliers’ defense forced three additional turnovers throughout a rather chilly evening. But, as many expected, the Sangamo Conference powerhouse still had plenty of fuel left in the tank to overcome some early mistakes, spoil an upset bid and win convincingly anyway.

The Cavaliers found themselves down 6-0 in the blink of an eye, but turned the tables on the Bullets after Ryenn Hart was roughed on a punt attempt near midfield.

Carlinville took advantage of that miscue and marched down the field to take a 7-6 lead.

Carlinville went into halftime trailing 27-13, but that deficit could have been even larger had the Cavaliers not forced and recovered a fumble that was lost by the Bullets at the goal line.

“It was a break right there and I thought our kids really hustled at that time,” Easterday said. “I thought we did a great job punching the ball out of there.”

The Cavaliers reduced a 33-13 gap to 33-20 in the middle of the third, but it was all Bullets the rest of the way. Henry Kufa came down with Seman’s second interception of the night on the ensuing drive, but the Williamsville defense quickly applied the tourniquet and forced Carlinville to punt the ball back.

“I feel like we just ran out of gas at that point,” Easterday said. “Emotionally and physically, we were out of gas.”

The score remained such until the fourth quarter, when Williamsville hit CHS with two final daggers on quick strikes. Seman uncorked a 36-yard touchdown pass and ran a two-point conversion in. After the Cavaliers went three and out, the Bullets handed the ball to Colin Ripperda and their leading rusher took care of the rest. The senior speed threat zipped through a fatigued Carlinville defensive line and scored his second touchdown of the night on a 62-yard sprint to the end zone. Ripperda ended with 92 yards on just six carries.

Jack Rouse carried the football 23 times for Carlinville and scored all three CHS touchdowns while contributing 73 yards. Z. Reels led the Cavaliers in total yardage with 92 on 18 rushes and made 10 tackles. Rex Reels completed nine of 15 passes for 35 yards. Conner Strutner and Declan Braley each picked up a sack.

For the Cavaliers, this was their 15th consecutive postseason appearance under Easterday. Despite getting off to the program’s worst start since 2008 at 0-3, the 2022 CHS team fought through the adversity and kept the streak intact. To this day, Carlinville still hasn’t missed the playoffs since Easterday took over the head coaching helm in 2007.

“I’m very proud of these guys, especially our seniors,” Easterday said. “They could have easily done something different, but they didn’t. They kept the tradition alive.”

The campaign ended exactly the way it started for the Cavaliers. Each of their first three losses came against fellow playoff teams in North Mac, Vandalia and Hillsboro.

Following a five-game winning streak, the journey was bookended by Pana and Williamsville, who both advanced to play again next week. Pana, who Carlinville was tied at 7-7 through three quarters of play before dropping the regular season finale, 21-7, also drew a Sangamo opponent in Auburn last Saturday. The Panthers wreaked havoc on the Trojans, 59-30, and are on a nine-game surge entering the second round of Class 2A postseason action against Fairfield, who upset North Mac in Virden last weekend.

“To play [Pana and Williamsville] back-to-back to end the year, I thought we gave a great effort,” Easterday said. “We played tough. That stretch of 14 to 15 days has accomplishments that don’t show up on the scoreboard.”

The CHS Football Highlights special section will be featured in the Nov. 17 issue.