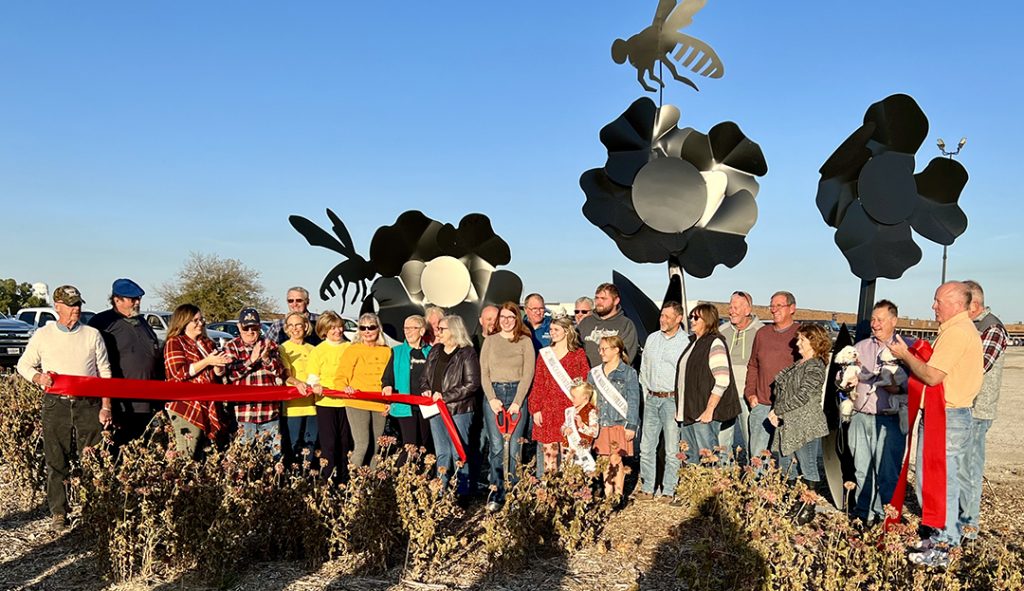 The Carlinville Plaza was busy Oct. 20 for a special ribbon cutting held on the west end of the parking lot. The recently placed Bee Sculpture that now graces the grounds was officially opened to the community after the ribbon was cut. Many of the individuals and businesses that helped during the creation or installation of the sculpture were present to celebrate its opening.

Carlinville Mayor Sarah Oswald gave the first address of the event. Oswald said during her speech, “The north part of town doesn’t get beautiful things and this is the start of that,” said Oswald, expressing how happy the city is to have another spot that will draw tourists to stop in Carlinville.

Mary Tinder from Make Carlinville Beautiful spoke to the crowd as well. She thanked the many generous donors to the project for the provided labor, equipment, financial contributions and help in any way they provided.

Scott Stinson, owner of the Carlinville Plaza, made a brief speech as the third speaker at the event. Stinson volunteered the area at the plaza for the bees to “live.” He and the Make Carlinville Beautiful committee have worked together previously on improvements at the Plaza, such as the pollinator garden installed on the east end of the complex near Reflections Salon. Stinson mentioned several other projects in the works at the plaza such as a dry camping area and electric vehicle chargers.

Alderman Doug Downey, who is also chair of the Tourism Committee, was the final speaker. He noted his thanks to the individuals and business that had helped the project get on its way. He spoke about his hope that the bee sculpture could become one of many geolocated markers throughout Carlinville.