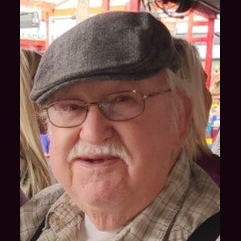 He was born on June 20, 1933 in Gillespie, a son of the late Miles Franklin and Esther Loretta (Whitfield) Slightom.

Tom graduated Litchfield High School and married his high school sweetheart, Ruby Roberson on Oct. 20, 1953 in Litchfield, and she preceded him in death on Aug. 6, 2003.

He was a Veteran of the United States Air Force for four years and was stationed in Virginia during the Korean War. Upon his immediate return from the service, Tom began working as an air plane mechanic for McDonnell Douglas and General Dynamic and traveled to several different missile sites. He then transitioned to a John Deere Tractor mechanic and later farmed in the Macoupin County area. He raised livestock, hogs, and was a grain farmer.

Tom enjoyed bowling, golfing, and gambling. He was a proud story teller of his “Hole in One” at the Litchfield Country Club. A story that he always told to his grandchildren and great-grandchildren.

Services were held on Saturday, Oct. 15, 2022 at the Litchfield Family Funeral Service in Litchfield. Pastor Timothy Barbee, minister of the Christian Church of Litchfield officiates. Burial was in the Elmwood Cemetery in Litchfield.

The family suggests memorial contributions be directed to the St. Jude’s Children Hospital or the Wounded Warrior Project.

Litchfield Family Funeral Service is in charge of arrangements.

To view the online obituary, leave a condolence, or light a candle, please visit litchfieldffs.com.