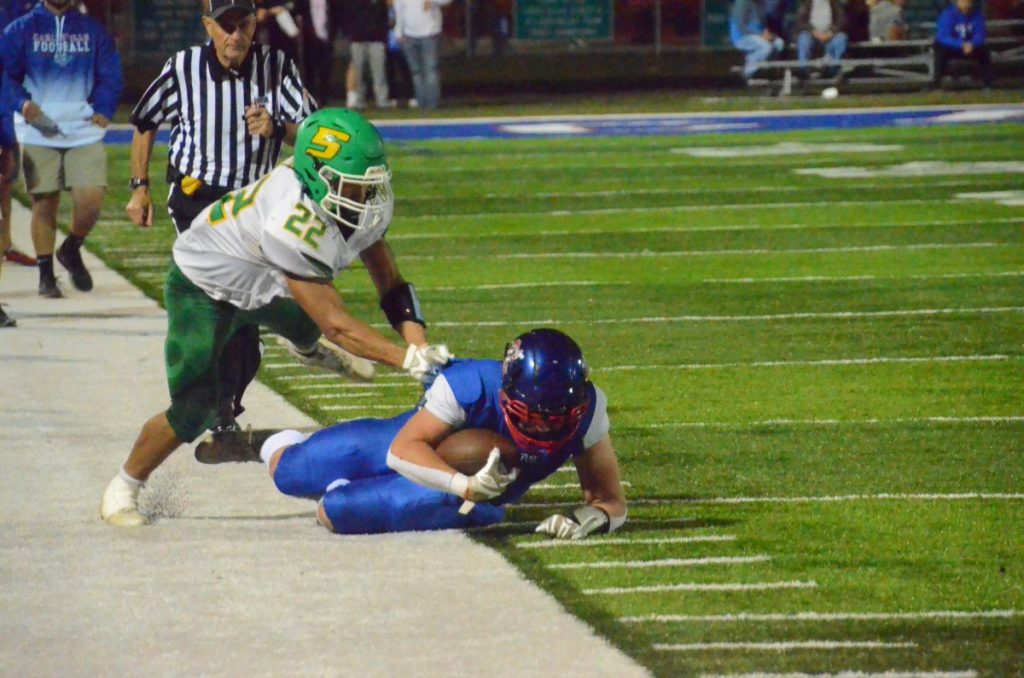 Jacob Fisher, pictured making a tackle at Carlinville Sept. 30, had two touchdowns and 133 rushing yards on 20 carries while picking up a sack on defense during the Southwestern High School football team’s 21-14 upset of Vandalia in Piasa Oct. 7. Enquirer~Democrat photo by Jackson Wilson.

The Southwestern High School football team, though dangling by a thread, is still alive and well in the postseason hunt through seven weeks following a stunning home victory Oct. 7.

The Birds, which needed to win out in order to become eligible, rose up to the first of three challenges and upset Vandalia, 21-14.

The 2022 rendition of the Southwestern program had been squarely built on a familiar ‘old school’ style of football, with the run game and defense as its main roots. Those were the two factors that ultimately saved the Birds’ season for the time being.

Southwestern finished the evening with 330 offensive yards, which were all generated on the ground. Grayson Brewer and Jacob Fisher combined for 284 of those yards on 36 carries and helped the Birds build a three-touchdown advantage while the defense completely stalled a surging Vandalia offense in the first three quarters. Fisher carried the football 20 times for 133 yards and found the end zone twice. Brewer compiled a team-best 151 yards and a touchdown on 16 rushes.

Brewer broke loose on a 66-yard venture to the house and set the tone for the Birds in the first quarter. Fisher executed a 14-yard red zone carry to double the lead in the second, then scored on what ended up being a game-winning 55-yard touchdown rush in the third quarter.

The Vandals came in averaging 43 points per game over the past three weeks but a stingy unit of Piasa defenders wasn’t intimidated and immediately started causing all kinds of problems. In additon to a Fisher sack, Southwestern forced three fumbles and recovered each of them while keeping Vandalia off the scoreboard for over 40 minutes.

The Birds stumbled down the stretch but managed to hang on after the Vandals hit them with a 14-0 run in the fourth. 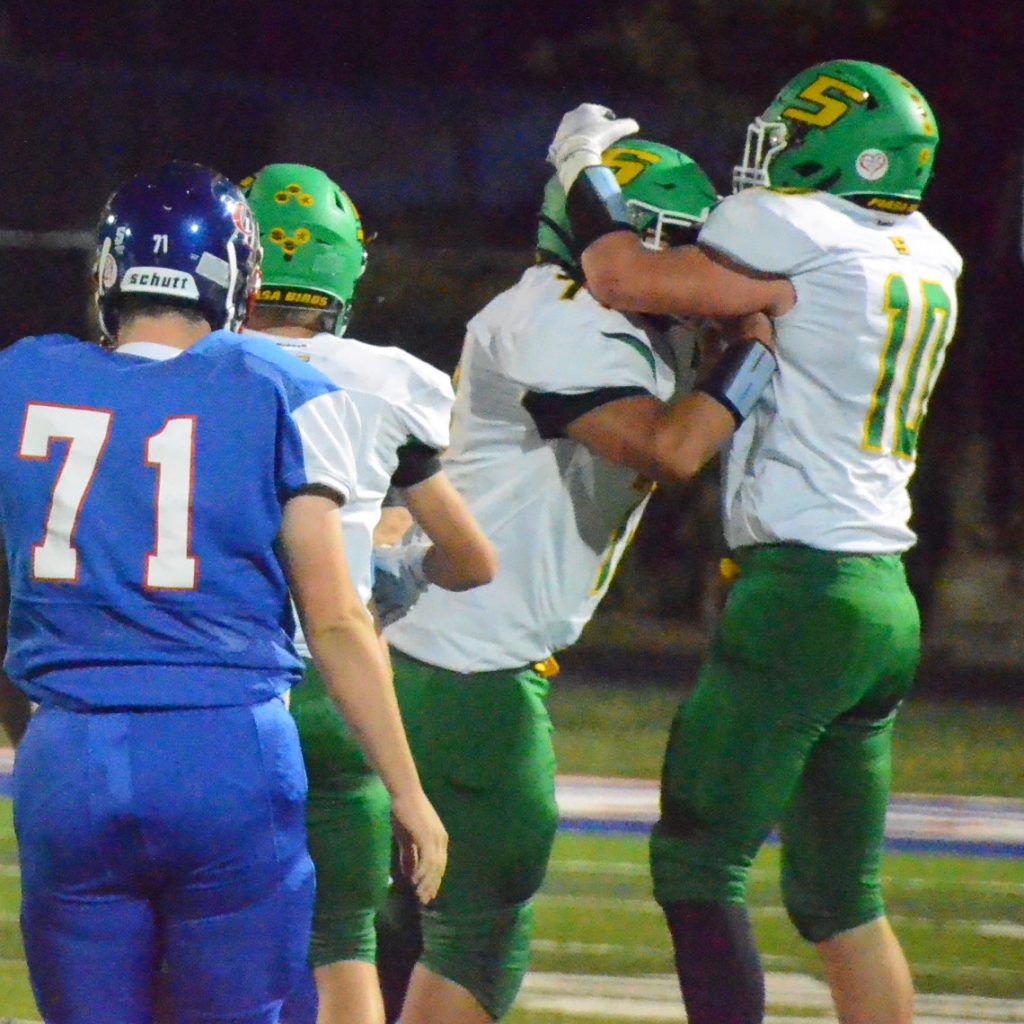 Southwestern tight end Logan Keith embraces one of his teammates after the Piasa Birds make a big defensive stop. Southwestern forced three turnovers and shut out Vandalia through three quaters en route to a 21-14 upset of the Vandals Oct. 7. Enquirer~Democrat photo by Jackson Wilson.

The hottest teams in Macoupin County struck again in Week 7.

North Mac and Carlinville each dominated a pair of bottomfeeders to extend triumphant streaks. Both games were decided by halftime.

The Panthers, which have been ranked in the top 10 of the Illinois High School Association’s Class 3A poll for the past five weeks, improved to 7-0 with a 49-0 win over Gillespie on Military Night in Virden. North Mac scored 21 points in each of the first two quarters, with Kaden Brown leading the charge with 145 yards and a pair of touchdowns on eight carries. Joe Reinhart, who also found the end zone twice on eight rushes (48 yards), made nine tackles and forced a fumble. Zane Hogan added a touchdown on eight carries for 56 yards and came away with an interception. The Miners fell to 1-6 with the loss.

Carlinville ambushed Litchfield with a 35-point avalanche in the second quarter and rolled to a 42-16 win on the road. Rex Reels connected with Ryenn Hart in the end zone twice while completing 15 of 21 passes for 181 yards. The junior quarterback also generated 38 yards on six keepers. Jack Rouse carried the ball eight times for 136 yards and scored four touchdowns. The Cavaliers have strung together four consecutive victories and are above .500 for the first time this year.

With Vandalia losing to Southwestern last weekend, all North Mac needs is a road win against 6-1 Pana to clinch an outright South Central Conference title this Friday.

Carlinville can clinch a 15th consectutive postseason berth under Chad Easterday against Greenville. If the Cavaliers have their Senior Night spoiled by the Comets, they will have to win at Pana the following week to keep the streak alive.

Staunton shut out by Hillsboro, will face Gillespie this week

The Bulldogs will look to get off the mat as they battle Gillespie at Don “Duke” Dobrino Field this Friday. They are additionally in pursuit of redemption after losing to the Miners 24-21 on home soil last fall. The two arch-rivals have split five victories head-to-head in their last 10 meetings.