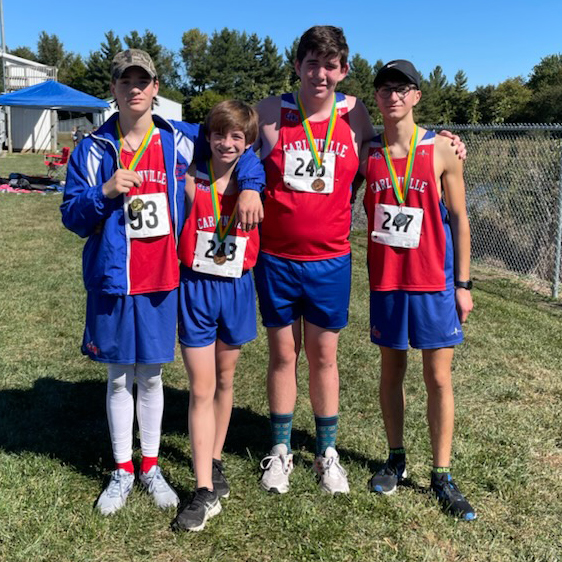 On Oct. 1, Thor Springman and Danny Hall were the top two finishers in a 47-man middle school boys’ race at their home Southwestern Invitational.

Springman ran two miles in 11:23 and Hall finished right behind him at 11:25. The two Piasa boys separated themselves from the rest of the pack by 19 seconds.

The high school portion of the Southwestern XC Invite was divided into groups that were based off everyone’s flight from their respective teams. The top runners in attendance competed against each other, then the second best and so on. Medals were awarded to the three fastest finishers in each group.

Garrett Buettel came in second place for Southwestern at 18:04 in the No. 2 runner race. Rhyse Rucker (18:28) of Staunton ranked third. John Bray (20:04) placed fifth for Carlinville. Gillespie’s Hank Fletcher rounded out the pack of eight runners in 21:17. On the girls’ side, Lexi Pfieffer ranked fifth for Staunton with a time of 23:18. Gillespie’s Erika Gill crossed the line in 24:54 for seventh and Jillian Beilsmith placed eighth in 25:35 for Southwestern.

Macoupin County runners filled the lower three slots in both of the No. 4 races. Eben Makler (20:34) and Kaylyn Holtorf (26:53), both of Southwestern, got fifth. Carlinville’s Cooper Fullington (22:21) and Gillespie’s Kori Petersen (27:48) settled for sixth. The seventh spots were occupied by Gillespie’s Carter Sies (23:10) and Staunton’s Elsah Clark (30:17).

A.J. Reisinger of Gillespie finished fourth amongst the sixth string girls’ runners in 27:08. Southwestern’s Katlyn Kemna was fifth in 29:26. Cheyanne Butcher of Staunton ranked sixth in 30:09. As for the boys, Carlinville’s Austin Homer ran his race in 21:04 to take fourth place. Logan Custer of Southwestern ended in 22:05 for fifth.

A trio of Carlinville runners competed in the No. 8 boys’ race, including James Bray, who won first place in 21:36. His teammates Pat Dunn and Tom Cottingham followed. Dunn placed third in 26:55 and Cottingham finished in 31:20 for fifth, behind Southwestern’s fourth place racer Marek Kirsch (29:13). Olivia Matesa of Staunton ranked fourth in the girls’ competition at 29:15 and Southwestern’s Megan Stewart rounded out the field in fifth at 31:27.

The other Carlinville High School runners competed at the Peoria Invite on the same day.