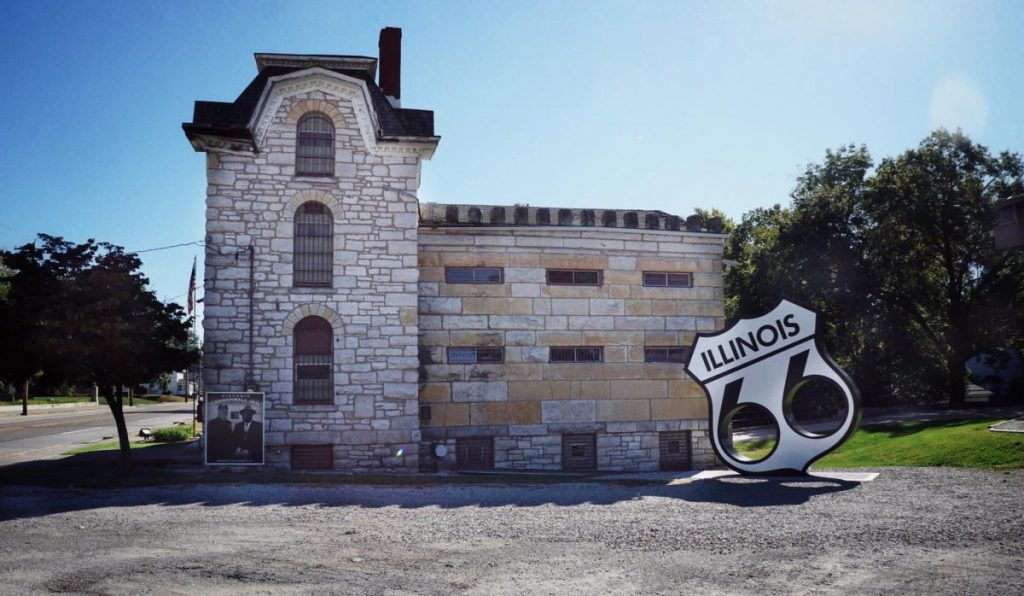 The Route 66 monument was placed outside the old “cannonball” Macoupin County Jail on Sat., Oct. 1. It is one of six monuments along the Southern Illinois portion of Route 66. The monument was placed thanks to a grant awarded to the Great River and Routes Tourism Bureau by the state. Photo provided.

The Carlinville City Council discussed several items, including two letters of correspondence asking for permission to hold events on City property. It also discussed clean-up efforts around town and the new tourist locations that were recently installed.

The first correspondence was from Tara Brown asking for permission to use the gazebo on the Carlinville Square for a small wedding ceremony to be held Sun. Oct. 16.

The council approved the request.

The second letter was from Joey Naples at the Uptown Tavern asking permission to hold a “Halloweekend” event Oct. 27-30. Naples asked permission to host a bounce house on Merchants night. On Fri. Oct. 28, he asked permission to host Flannel Fest, featuring outside dining and axe throwing, beginning at 5 p.m. Naples requested to have a live band outside from 9 p.m. to 11:30 p.m., which caused much discussion amongst the council. The council discussed that other bars have had live music and they were made to stop at 10 p.m. so the Uptown should stop then as well.

There will also be outdoor dining on Friday, Saturday and Sunday.

The council approved the request provided the band be done playing at 10 p.m.

During public comment, City Administrator Brian Zilm told the council that he met with the company boring holes around town for fiber optics. The company is supposed to send the city a plan of where they will be working, which includes a map of right-of-ways and easements. The company will also include information on who to reach out to if a citizen has a problem with the work being done on their property.

Alderman John Levora asked if Connexus’ Insurance would cover payment for the last two Saturdays, referring to over time payments for city workers after water mains were hit during the digging process.

Public Works Director Dan Held said they would need to do some investigating and find who was at fault. The party at fault would then be responsible for the payment.

Held said that if the line was mismarked it would not be the boring company’s fault. Per Alderman Kim Harber, according to JULIE law, a mark must be within 18 inches of where the line is actually located, and if it is not then whoever marked the line would be responsible for paying. In the case of water lines, the city of Carlinville marked the locations and if not done correctly the city would be responsible for payment.

Alderman Doug Downey made a public comment in regards to the new tourism opportunities around town. Downey and the Tourism Committee thanked Great Rivers and Routes, Cory Jobe, Joey Naples, Sheriff Shawn Kahl, the Macoupin County Board and Andrea Duncan for the work on the Route 66 monument placed outside the old jail and the postcard mural located on East First North Street and North Broad Street.

The tourism committee also wanted to thank multiple people for the new bee sculpture located at the Carlinville Plaza. The sculpture was created by Brigid Dunn and Holly Bloomer. Cisco Steel donated the materials for the project. P.M. Machine Shop constructed the sculpture. John Eldred donated his time and equipment to excavate the area to place the sculpture. Ed Bates poured the concrete for the base. 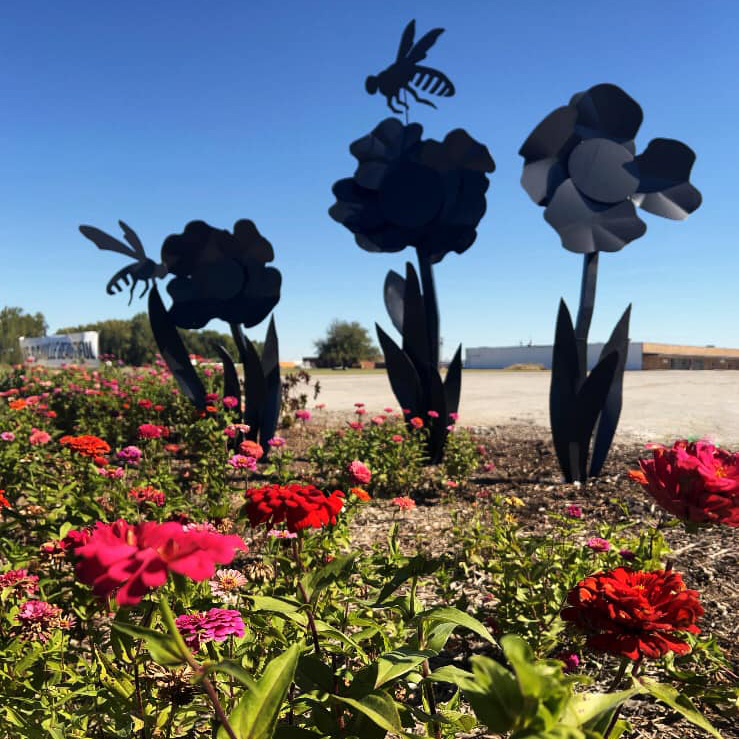  The new Bee Sculpture located at the Carlinville Plaza was installed over the weekend. Several area businesses and people donated their time, money, and equipment to create and place the sculpture. Carlinville was named the first Bee City USA in the state of Illinois in 2019, these sculptures honor the Bee City designation and are hoped to be used to promote tourism in Carlinville. Photo from the Carlinville Bees Facebook Page.

Zilm brought to the council his recommendation to rezone a property. The former office for Goodman Agency located at 230 East Main Street is currently zoned as neighborhood commercial. The zoning committee voted to bring it to the council to rezone it as multi-family. The Goodman’s are looking to turn the building into apartments. The city agreed to rezone the property.

City Treasurer Jody Reichmann announced to the council that the financing for the water meter replacement project hadgone through. The order for the meters should be placed by the end of October.

Mayor Sarah Oswald announced a fall clean-up for Oct. 7 and 8. Dan Held reminded citizens of items that were not allowed including, batteries, televisions, chemicals, electronics, paint or tires. He also wanted to inform the public that the clean up is only for residents of the city of Carlinville. The Street Department Garage is located at 434 North Plum Street and will be open Oct. 7 from 7 a.m. to 3p.m. and Saturday from 7 a.m. to 1 p.m.

Alderman Randy Ober added that there would be a clean-up on Johnson Street to clean up some of the Sears Homes. The hope is for the homes to feature in tours of the area. That clean-up will also be on Sat., Oct. 8 from 10 a.m. to 1 p.m.