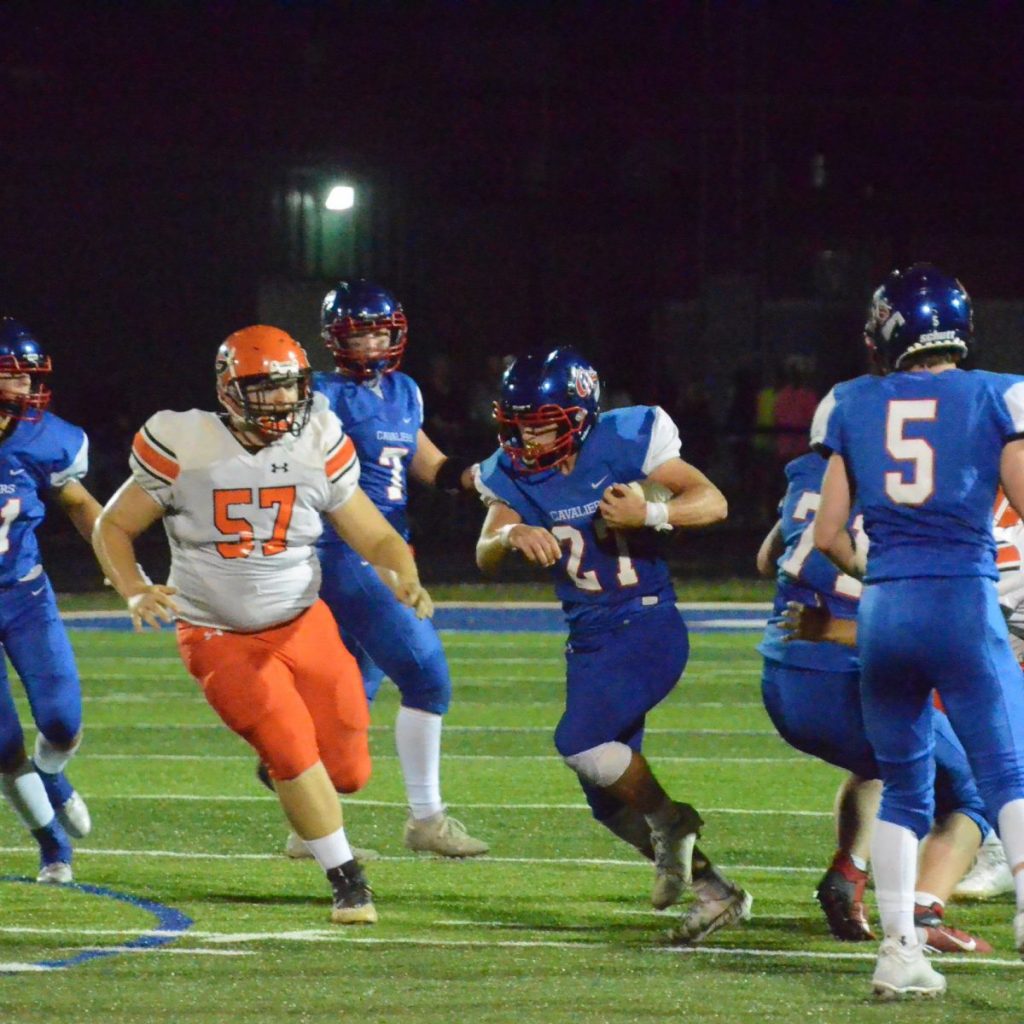 Jack Rouse, pictured running the football for the Carlinville High School football team during a home game against Gillespie Sept. 16, set a new career-high with 217 rushing yards on 27 carries for the Cavaliers in a 34-21 win at Staunton Sept. 23. Enquirer~Democrat photo by Jackson Wilson.

Nearing the midway point of the 2022 campaign, the Carlinville High School football team needed to wake up fast in terms of getting into the win column if it was going to extend Chad Easterday’s postseason berth streak to 15 consecutive seasons.
They slowly were improving by the week, but the Cavaliers were off to an 0-3 start for the first time since 2008 and the play needed to be even better.

A difference maker had to step into the spotlight and help restore hope for CHS. That answer was Jack Rouse, who helped the Cavaliers get back into the playoff hunt.

Needing another key win over Staunton after Carlinville snapped its losing streak the previous week, Rouse put the team on his back and hit the hole hard against the reeling Bulldogs. After setting a career-high total of 194 yards on 31 carries in a home victory over Gillespie, the CHS running back took the reigns again and broke his own personal record with 217 yards on 27 carries while scoring four touchdowns in a 34-21 win that eliminated Staunton from playoff contention on its homecoming night.

Rouse also pulled in an interception on defense, along with Henry Kufa. Jake Schwartz and Zach Reels were difference makers on defense as well. Schwartz recovered a fumble and Reels matched Staunton’s Cole Sternickle with a game-high 13 tackles.

The Cavaliers, which led 27-7 at the half, received an added boost through the consistent play of another Reels – their quarterback, Rex. On 13 pass attempts, the CHS junior had 11 completions for 142 yards and found four different targets. Kufa reeled in five throws, one for a touchdown. Liam Tieman led the Cavaliers in receiving yards with 65 on four catches.

Carlinville improved to 2-3 with the win.

Cody Ury collected 160 yards and a touchdown on eight completed passes for the Bulldogs. Jacob Dillon, who was on the receving end of Ury’s scoring strike, also found the end zone via the ground game. Dillon ran for 67 yards on 14 carries.

Bo Buffington had two catches, including one that went for 52 yards.

Staunton remains the lone winless team in the South Central Conference at 0-5.

Carlinville is back on its home turf this Fri., Sept. 30 against Southwestern in another key matchup. Both squads are 2-3.
Staunton heads to Vandalia (4-1).

With a 38-0 win against Hillsboro, North Mac was the first SCC team to become playoff-eligible this year.

Zane Hogan led the charge for the undefeated Panthers with 200 yards and a touchdown on 11 carries. Kane Brown added 90 yards on nine rushes.

Dane Vance, who alternated the quarterback position with Brown, completed seven of eight throws and a pair of touchdowns and finished the night with 140 yards – 98 through the air and 42 on the ground.

Joe Reinhart brought down 16 Hiltoppers and committed a sack for a defense that has been clicking on all cylinders. The homecoming victory was North Mac’s second shutout of the season and the Panthers have only surrendered a total of 22 points, including just seven in three home games.

North Mac (5-0) travels to Bond County to meet Greenville (4-1) in a battle of league frontrunners this Friday.

Southwestern led 7-0 after a quarter, but didn’t have enough firepower to fend off Pana.

The Piasa Birds were outscored 29-7 in the second and third quarters combined and fell short at home, 35-21. Southwestern suffered another loss when its quarterback Quinton Strohbeck had to be carted off the field on a stretcher after going down with an injury.

Strohbeck completed five passes for 40 yards and contributed an additional 34 yards on 11 keepers prior to his departure.

Strohbeck, Jacob Fisher and Grayson Brewer collaborated for three touchdowns (one apiece) and 149 yards on 44 rushes.

Prior to the game, the Piasa Birds honored their assistant Gary Bowker, who is in his 50th year of coaching.

Southwestern is 2-3 overall and will look to avoid a ‘win out’ scenario for playoff eligibility on the road at Carlinville this Friday.

Rookie head coach Dalton Barnes had to watch his Gillespie Miners get torched for a fourth consecutive week, this time by Vandalia on homecoming, 48-6.

Gillespie, outscored 40-0 by the Vandals through three quarters, is 1-4 and will play at Hillsboro this Friday.