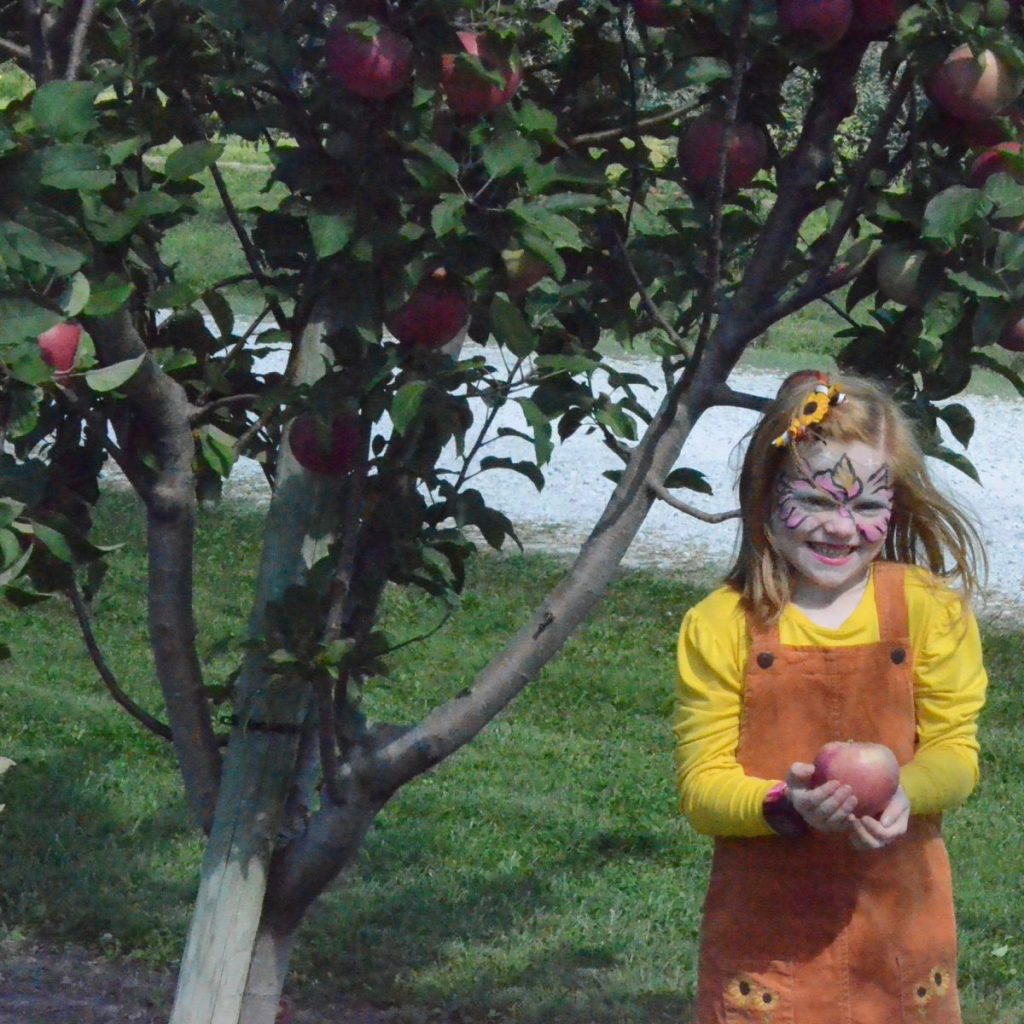 In addition to apple-picking, visitors to the 40th annual Apple Festival could have their face painted. Enquirer~Democrat photo by Jackson Wilson.

The final weekend of September brought with it 60 to 70 degree temperatures and a fresh breeze – perfect weather for families to get out and enjoy themselves at the 40th annual Apple Festival at Broom Orchard Sept. 24 and 25.

In addition to having the privilege of picking their own apples, a large crowd of visitors harvested pumpkins, had their faces painted, rode ponies, made new furry friends at a miniature petting zoo, embarked on a journey through a corn maze, spent time at a playground and purchased items that were being sold by craft venders.

Guests also savored many treats, including the award-winning Broom apple cider and slush that has always been homemade on the family farm.

“We couldn’t have asked for a better weekend,” said Jeff Broom. “We have customers coming back every year bringing their kids and grandkids. This has truly become a family tradition and we are proud of that. We are one of a few orchards that allows you to pick your own apples and people really enjoy that.”

J. Broom additionally wanted to thank his wife, Lisa Broom, who worked to provide a wide variety of products in the market along with apples that were harvested beforehand and made ready for pick-up.

J. Broom’s mother brainstormed the idea of the Apple Festival while she was at a Michigan meeting back in the late 1970s and spent time researching how to bring it to the 128-acre Carlinville orchard, which had originally been established by Leonard Sooy in 1920. In 1982, the first Apple Festival was officially launched.

This particular orchard isn’t just famous for its apple-picking. Ever since it was purchased by the Broom family in 1968, a Farm Market has grown and flourished. Today, thanks in large part to Jeff and Lisa creating a new retail version of the market after they bought the farm from William and Joan Broom in 1995, the orchard has expanded its customer service spectrum. Today, it now consists of peaches, blackberries, nectars, plums, pears and pumpkins, depending on the season. The market is additionally stocked with Amish apple butter, honey, popcorn, preserves and all types of fruit spreads to go along with the popular ciders.

“Our success lies in our desire to provide top quality fruit in a family-friendly environment,” said J. Broom.

“We invite you and your family to come and experience our Festivals and Farm Market, where your business is always appreciated,” said J. Broom.

For more information, stay tuned to the Broom Orchard Facebook page, call 217-854-3514 or visit the farm’s website at www.broomorchard.com.