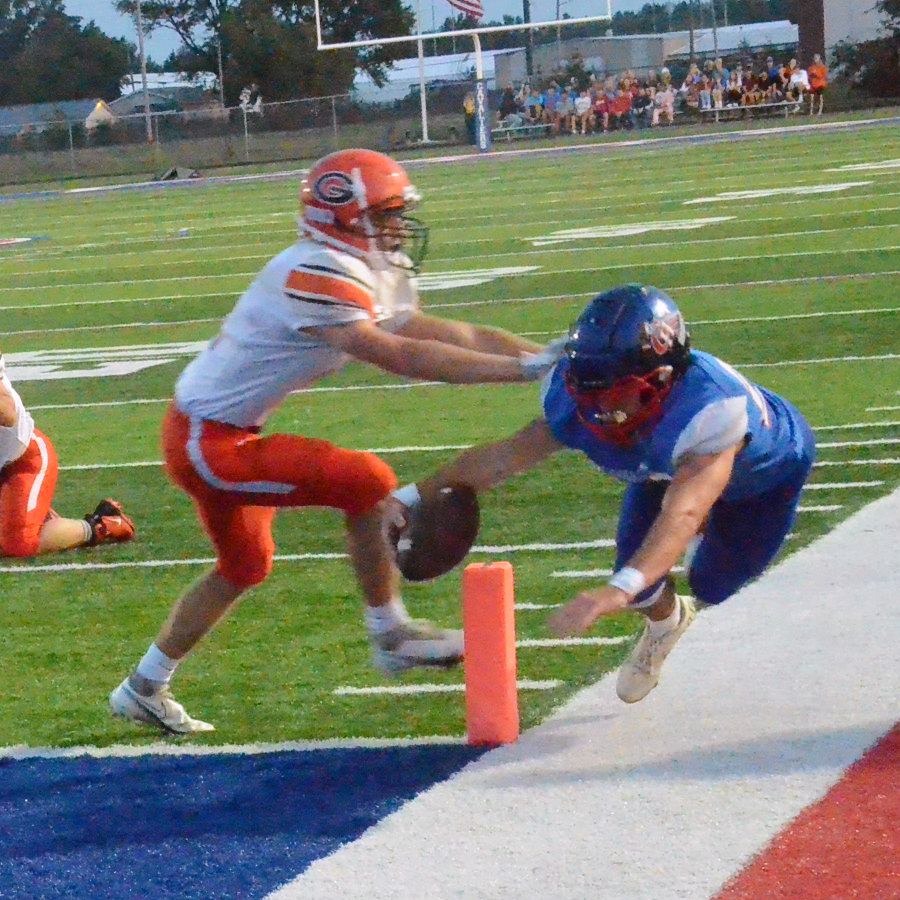 With his team in need of an important win, Jack Rouse scored four touchdowns and ran for 194 yards on 31 carries to set the tone for the Carlinville Cavaliers as they stomped their Route 4 rival Gillespie Miners, 48-0, at the Carlinville High School athletic field Sept. 16.

The Cavaliers hit the end zone twice in each of the first three quarters and were on cruise control with a mercy clock ticking away the final 12 minutes.

CHS quarterback Rex Reels was also consistent with his passes, completing nine of 11 throws and connecting with Mason Wise on a 27-yard touchdown.

On defense, Hart made a team-leading eight tackles. Conner Strutner and Zach Reels added six takedowns apiece. Jake Schwartz, Declan Braley and Brandon Roth each picked up a sack and Henry Kufa came away with an interception.

The victory, Carlinville’s first of 2022, ended a three-game skid and brought the Cavaliers to 1-3 on the year.

Gillespie also left town 1-3 after enduring its third consecutive loss. Ever since they outlasted Litchfield 24-18 in a tight season opener, the reeling Miners have been overpowered 145-12 while getting shut out two weeks in a row.

Carlinville is on the road to meet another county rival this Fri., Sept. 23. The Cavaliers meet the winless Staunton Bulldogs at 7 p.m.

Gillespie is back in action at Don “Duke” Dobrino Field and will look to rekindle its fire against Vandalia (3-1) on homecoming weekend.

North Mac spoiled Litchfield’s homecoming with a 43-6 stomping and remained the only undefeated team in the South Central Conference at 4-0.

The Panthers went into halftime with a healthy 28-0 edge and kept Litchfield off the board until the fourth quarter.

Kane Brown completed eight of 11 passes, one for a touchdown, and generated 81 yards through the air. The senior quarterback additionally carried the ball seven times for 57 yards.

Zane Hogan took 13 handoffs and led all Panther rushers with 66 yards and a touchdown. Brown and Reed Lewis also broke the plane on red zone carries.

The NMHS defensive core, which has only allowed a total of 22 points the first four weeks, was led by 11 Joe Reinhart tackles and a Logan Hammann interception.

North Mac, currently ranked within the top ten of the Illinois High School Assocation 3A Class, hosts Hillsboro (2-2) this Friday.

Grayson Brewer caught a 28-yard pass from Quinton Strohbeck and carried the football 78 yards on 16 rushes.

In defeat, Southwestern generated 196 of its 266 total yards on the ground.

Strohbeck, who was held to 70 passing yards and a shaky 9-for-19 completion rate, ran 10 keepers for 45 yards and a touchdown.

Jacob Fisher had 60 yards on nine rushes and also found the end zone. The senior additionally made a team-best 12 tackles.

The Piasa Birds return to their home nest and will battle Pana (3-1) this Friday.

Aside from a 31-yard Cole Aberle field goal in the first quarter, the Staunton offense was held dormant by a tough Pana squad in hostile territory.

The Bulldogs’ defense posted a shutout in the second half, but the Panthers had already done enough damage in the game’s first 24 minutes to secure a 28-3 victory.

Drake Rose made 11 tackles and recovered a fumble for the Dogs.

Aberle also pounced on a loose football and forced another Pana turnover when he brought down an interception.

Staunton is 0-4 heading into Week 5 against Carlinville.