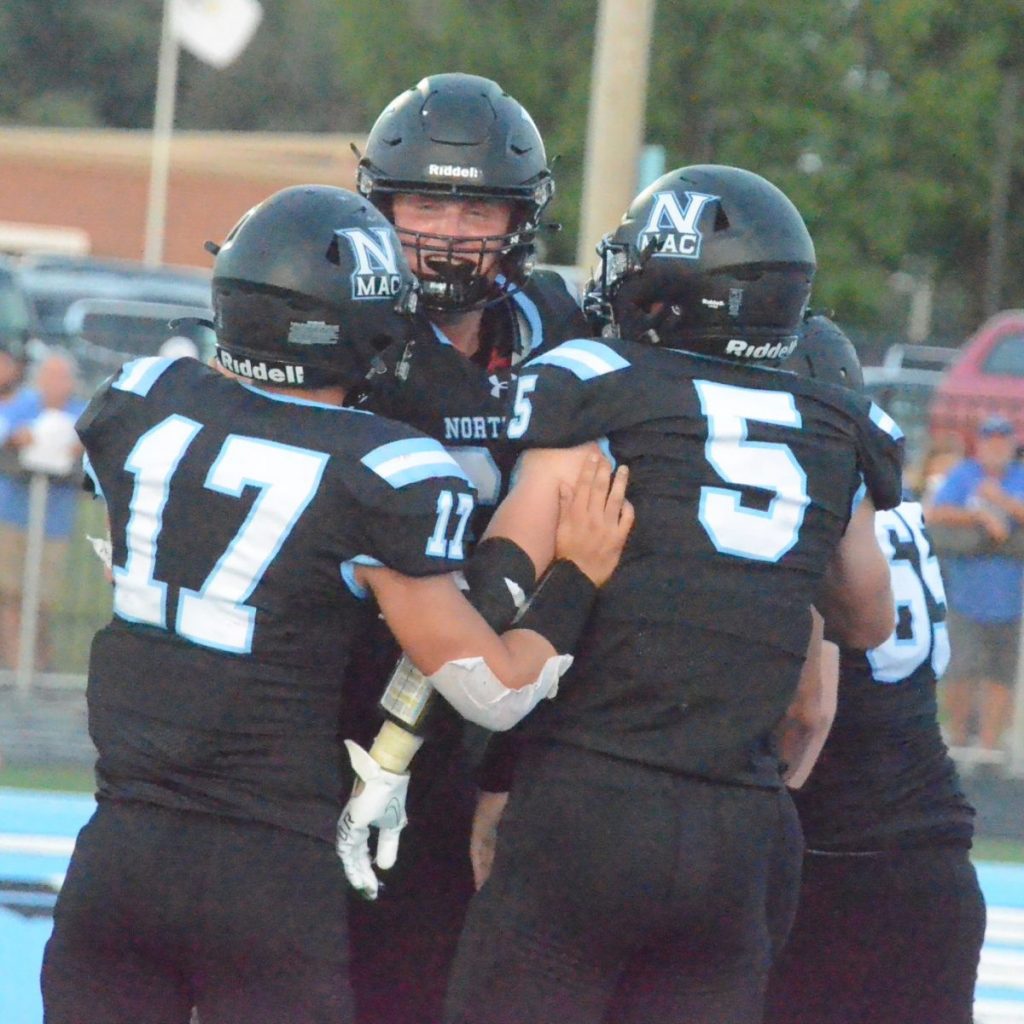 The North Mac High School football team, pictured celebrating a touchdown, knocked off Vandalia 40-7 in a battle of state-ranked foes in Virden Sept. 9. The Panthers are 3-0 on the season and are currently in soul possession of first place in the South Central Conference. Enquirer~Democrat photo by Jackson Wilson.

Brewer, Southwestern runs all over Litchfield

In a battle of state-ranked foes, the North Mac High School football Panthers banished the Vandalia Vandals from their Virden home turf, scoring 40 unanswered points over the course of the second and third quarters alone to claim sole possession of first place in the South Central Conference Sept. 9.

North Mac compiled 379 yards, including 329 on the ground. Reed Lewis and Joe Reinhart were the focal points of that attack, each taking nine carries for an average of ten yards per effort. Both players scored two touchdowns and Lewis led the way with 98 yards. Reinhart finished with 93 on the night while making a team-best 11 tackles on defense.

Matthew Hagy put the Vandals up first on a 15-yard passing touchdown to Andrew Kelly, but the Panthers adjusted and clamped down on the Vandalia quarterback the rest of the evening. North Mac shut out Vandalia in the remaining 44 minutes en route to the 40-7 victory.

Brewer, Southwestern runs all over Litchfield

Rising star Grayson Brewer ran for 220 yards on 19 carries while scoring three touchdowns for Southwestern in a 40-6 win over Litchfield.

Jacob Fisher added 83 yards and a pair of touchdowns on eight rushes.

David Watkins led a stingy Southwestern defense with 10 tackles and Ryan Lowis picked up a sack.

The Birds venture to Bond County to battle Greenville (2-1) Friday.

For the second week in a row, it was heartbreak in the closing seconds for Carlinville.

Leading 21-18 with 12 seconds to go, the Cavaliers failed to keep Hillsboro’s Blaze Helton out of the end zone on an ‘all or nothing’ touchdown carry from three yards out.

Following a Rex Reels interception on the game’s final play, Carlinville found itself staring at an 0-3 record for the first time since 2008 as the Hiltoppers celebrated a 25-21 win on their home field.

The Cavaliers trailed 12-0 early but rallied with a touchdown late in the first half. Carlinville carried the momentum into the third quarter and ventured down the field again, this time for eight points and a 15-12 lead.

From that point, the tug of war was on.

Hillsboro re-gained an 18-15 advantage, then Jack Rouse completed the Cavaliers’ longest offensive drive of the season on a clutch 21-yard dash to the end zone with just under two minutes left in the game.

Though they didn’t need 90 yards as Carlinville did on what seemed to be a game-winning trip at the time, the Hiltoppers still had a daunting task in front of them as they started from their own 31. However, one minute and 50 seconds was just enough time for Hillsboro to march down and steal the win.

Rex Reels threw a touchdown for the Cavaliers and completed 14 of 21 passes for 141 yards in defeat.

Zach Reels made 19 tackles and was one of five Cavalier defenders to hit double digits in that statistical catagory. Declan Braley added 13 tackles. Jake Schwartz, Ethan Gibbel and Ryenn Hart each finished with 12 apiece.

En route to a 38-14 home loss to Greenville, the 0-3 Staunton Bulldogs fell out of the game early as they went into halftime trailing by a lopsided 25-0 margin.

Cody Ury completed eight of 16 throws, one for a touchdown, and had 123 yards for the Dogs. The other end zone strike was made by Andrew Dustman on one of his seven carries. Drake Rose was Staunton’s leading rusher with 69 yards.

Pana routed Gillespie, 47-0, on the road and triggered a mercy clock with a 40-point lead heading into the fourth quarter.

The Miners have been outscored 97-12 in the past two weeks.