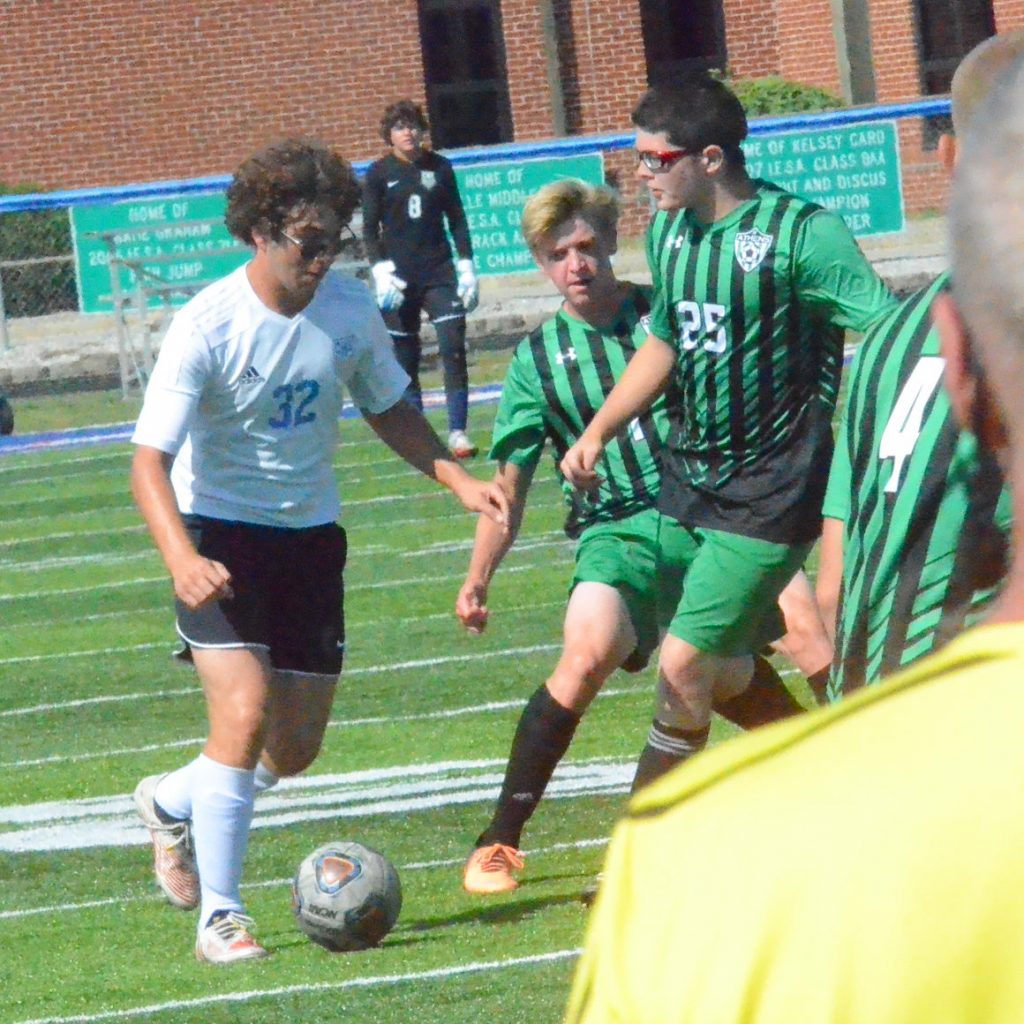 Tyler Summers was one of ten Cavaliers that scored a goal during Carlinville’s 11-0 drubbing of Pana in the high school boys’ soccer team’s first conference match of the season. Enquirer~Democrat photo by Jackson Wilson.

CHS became 2-0 in SCC play with wins over Pana and Greenville, and was 7-1 overall heading into a highly-anticipated battle against top-ranked Class 1A powerhouse Sacred Heart-Griffin.

Fresh on the heels of another Route 66 Kickoff Classic title win, Carlinville traveled to Pana and sent an early message to the league Sept. 6. While the defense kept the Panthers scoreless without a shot on goal, ten different Cavaliers scored on the other end, including Paeton Brown, Asher Barbre, Tyler Summers, Matt Reiher, Gavin Norwood, Ian Bethard, Brody Harris, Kaelen Furness and Keegan Lynn. This was already the second time in which the CHS offense had met the double-digit mark this year.

Carlinville returned to its home turf and found the back of the net twice in the first half to beat Greenville Sept. 8. Brown capitalized on a Comets’ turnover near the 11-minute mark and Elijah Suttles nailed a shot from the far side after being assisted by Caleb Kolsto at 15:33.

The Cavaliers shut out the Comets, 2-0, and remained stingy up front against opposing attacks. Greenville only managed to create one scoring opportunity against the CHS defense the entire night.

Luke DeWitt scored a hat trick and led Staunton to an easy 6-1 victory over Vandalia in SCC action Sept. 8.

As a team, the Bulldogs put together a hat trick in both halves with Adam Overby, Ethan Sharp and Aaron Bodner backing DeWitt.

Staunton, which picked up a 2-1 non-conference win at Lebanon the day before, raised its record to 4-4-1 overall. The

Bulldogs are 1-0 against the SCC.

North Mac took down Vandalia in penalty kicks to start its conference season 1-0, but that undefeated feeling quickly faded away when the Litchfield-Gillespie co-op Panthers rolled into town Sept. 8.

Litchfield-Gillespie is 3-5 overall and also 1-1 in league play. LHS opened its conference season with a 6-1 loss at Hillsboro Sept. 6.