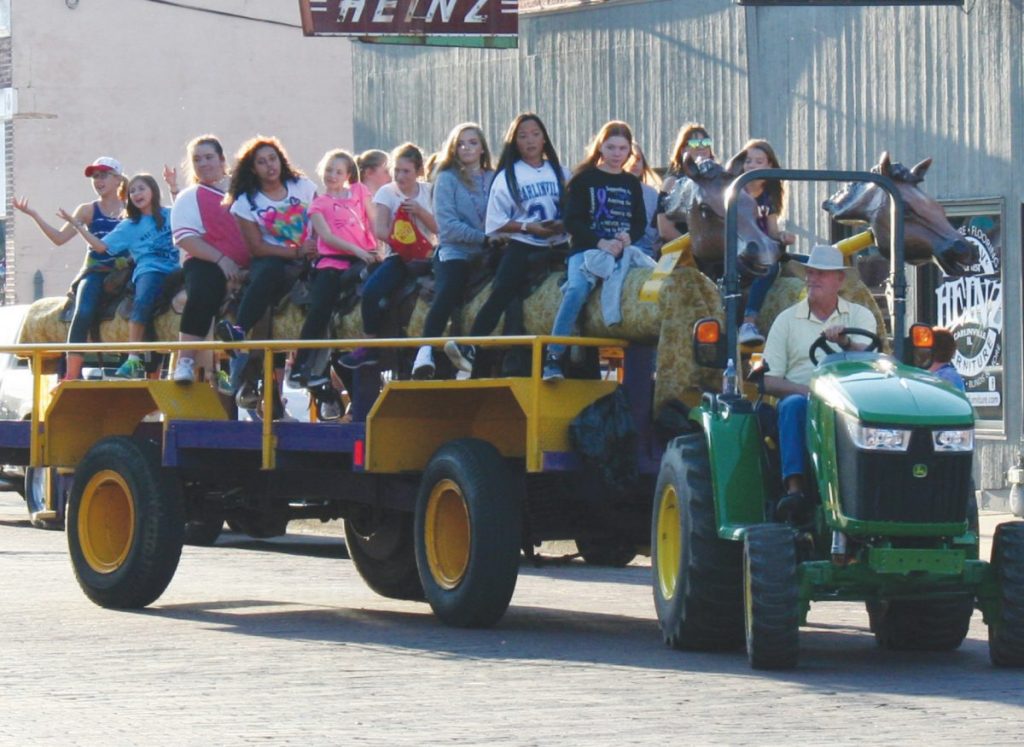 A load of Carlinville youth head toward the square on the back of one of the Lions Club vehicles at the 2017 Lions Club Carnival. MCED file photo.

The Carlinville Lions Club Carnival will be back Friday Sept. 9 and Saturday Sept. 10 for the first time in three years. A parade will be held on Friday, Sept. 9 at 6 p.m. beginning at the Macoupin County Courthouse to kick-off the Carnival.

The Lions Club Carnival began in 1944 as a Fall Festival for the community.

An advertisement for the first ever event read, “Usual festival atmosphere will be provided with games, lunch stands, cake walk, bingo, popcorn and other attractions furnishing plenty of entertainment throughout the evening. There will also be a big auction of valuable merchandise including hard to get items such as shotgun shells and cigarettes. Lions in charge are promising ‘for the time of your life don’t miss the big Lions carnival.’”

The first carnival was held at the Carlinville High School, and all profits were to be used for the promotion of community projects.

While shotgun shells and cigarettes may not be as hard to come by as they were during World War II, the events advertised 78 years before remain mostly the same as they are now.

The Lions Carnival is always filled with a festival atmosphere and the games remain popular among children and adults as a way to show off to friends and win prizes. Bingo and the Cake Walk are two classic Lions Carnival events, taking up the corners of East Main outside Edwards Jones and Route 66 Craft Beer.

Of course, the date has changed as well, the Lions Carnival is now held in September and over a two day period. The location was also moved outdoors, keeping the Carlinville Square busy with revelers.

Rides were added to the Carnival in later years. The peanut wheel, bucking broncos, wagons, merry-go-round, fire trucks and the iconic purple train are the rides expected at this year’s Carnival.

The Lions Queen contest was added shortly after the carnival began in the 1940s. Silver half-dollars instead of tickets would earn a favorite candidate the crown in 1947.

This year the candidates for Queen are Amelia Cosenza, Lillie Reels, Lanna Vanderpoel, Chloe Velasquez, Sara Wiese and Ella Wise. The Queen will be coronated on stage at 9 p.m. on Saturday. The stage is located at the intersection of East Main and South East Street.

Fried fish and corndogs will be sold by the Lions Club volunteers.

Funds from the event have gone to multiple community projects and charities throughout the years. As with previous years, the funds from the 2022 Carnival will go into the Lions Community Betterment Fund.