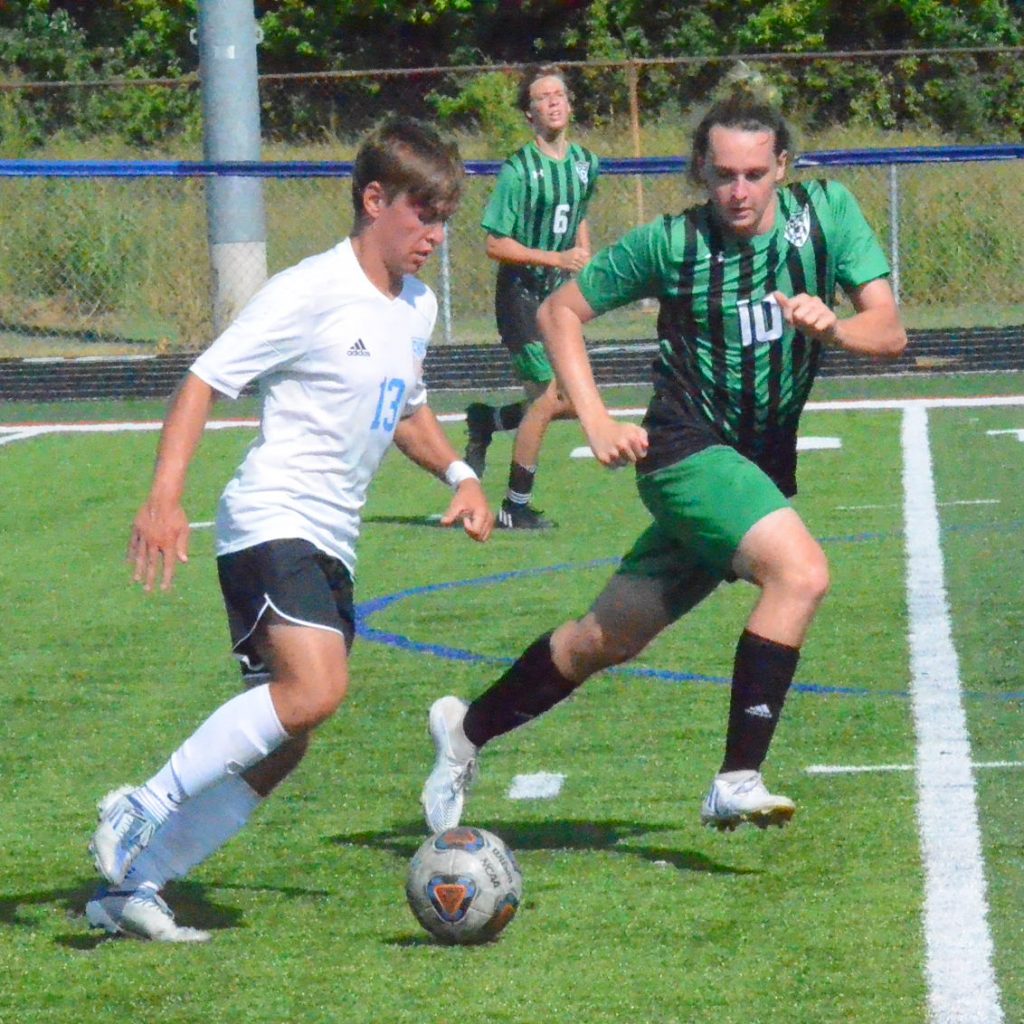 Asher Barbre, pictured, and the Carlinville High School Cavaliers repeated as champions of the Route 66 Kickoff Classic with a 3-2 overtime win against Lincolnwood Aug. 31. Barbre assisted on a goal to help lift the Cavaliers over Staunton 1-0 and qualify for the title game the previous night. Enquirer~Democrat photo by Jackson Wilson.

Beneath the night lights of their home turf, the Cavaliers outlasted Lincolnwood 3-2 in a rematch of last year’s regional championship game.
The visiting Lancers drew first blood with a goal at the 29th minute of the first half and took that 1-0 advantage into the break.

Roughly 26 minutes into the second half, Paeton Brown tied the game and ultimately forced overtime on a clutch kick that was assisted by Matt Dunn.

Dunn and Brown stayed hot in the extra time. After five minutes, Dunn gave the Cavaliers the lead when he scored off a pass from Augie Rowe. Brown then took advantage of a Lincolnwood turnover and provided what turned out to be crucial insurance with his second goal of the night.

With just under eight minutes left until the final horn, the Lancers returned the favor and made the Cavaliers pay for a violation.

Lincolnwood reduced the gap back to one goal on a successful penalty kick.

Despite getting outshot 9-6 and struggling to prevent corner kicks, the Carlinville defense remained solid thanks in large part to the play of goaltender Will Meyer. Meyer made seven saves for the Cavaliers, who improved to 4-1 with the win.

Carlinville edged Staunton 1-0 the previous night to finish 3-0 in pool play and qualify for the title match.

Kendall Longwell and Adam Overby each scored a goal to help vault the Litchfield-Gillespie co-op team over Staunton for fifth place Aug. 31.

It was the second victory in a row for the Panthers, who romped North Mac 4-1 the day before after starting 0-3.

Staunton, which got its goal from Brody Hill, dropped to 2-3-1.

Jackson Pierce found the back of the net for North Mac against Athens, but the Panthers got blown out by the Warriors, 6-1, and descended to 1-5 while finishing dead last in the tournament.