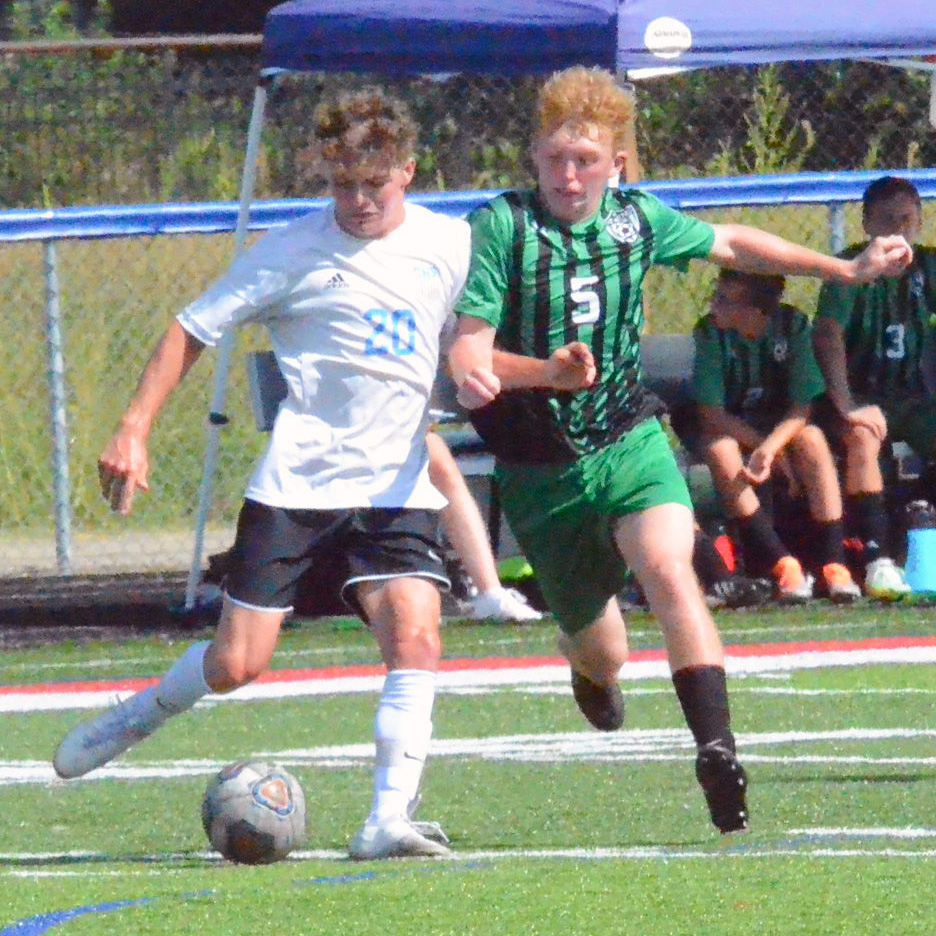 Brody Harris, pictured dribbling the ball for the Carlinville High School boys’ soccer team, scored a goal to help lead the Cavaliers to a 5-3 win over Springfield Lutheran in the opening match of the Route 66 Kickoff Classic Aug. 27. On that same day, Carlinville also beat Athens, 2-0. Enquirer~Democrat photo by Jackson Wilson.

The Cavaliers headed into Aug. 30 one win away from a berth in the championship match.

The Cavaliers used a balanced offensive attack to defeat Springfield Lutheran in the opening game of the Carlinville pool. Five Carlinville players found the back of the net, including Jack Goby, who stopped the bleeding late in the second half after the Crusaders cut a 4-1 deficit to 4-3 in a matter of seconds. Carlinville also got goals from Matt Dunn, Paeton Brown, Asher Barbre and Brody Harris. 5-3 was the final score.

In the next game, Staunton battled Athens and came away with a 4-1 win. Rhyse Rucker scored twice. Luke Dewitt and Aaron Bodner also contributed a goal for the Dogs.

Staunton was faced with the challenge of playing a back-to-back in summer heat and that costed the team against Springfield Lutheran, which had a few hours to recover from the opening loss. The Crusaders came out rejuvenated and beat the Bulldogs, 4-0.

With the door wide open for sole possession of the pool’s top slot, Carlinville took care of business against Athens, 2-0. The Cavaliers created 16 scoring opportunities for themselves at the net, while the defense kept the Warriors on that end of the field from start to finish.

Athens went the entire game without getting a shot on Will Meyer. Dunn broke the ice in the closing minutes of the first half and Matt

Reiher put the game out of reach down the stretch.

Up the road in Virden, North Mac was being given way more than it could handle against Hillsboro and Lincolnwood.

The Panthers were outscored 15-0 over the course of two shutout losses and fell to 1-3 on the year.

The Lancers won the opener, 7-0, and the Hiltoppers followed suit with an 8-0 pummeling in the afternoon.

The Panthers were simply no match for those two squads, as they also made easy work of Litchfield in other action throughout the day.

Lincolnwood dominated 9-0 and Hillsboro obtained bragging rights against its rival via a 6-1 thumping.

The Kickoff Classic continued with pool play Aug. 30, then conluded with the place contests and championship Aug. 31. Weather pending, the rain date is Sat., Sept. 3.

At Carlinville, Lincolnwood and Hillsboro kicked off Tuesday evening prior to a rivalry showdown between the host Cavaliers and Bulldogs.

Lutheran and Athens squared off in Virden, along with North Mac and Litchfield.

Results from the remaining games will be featured in next week’s issue.