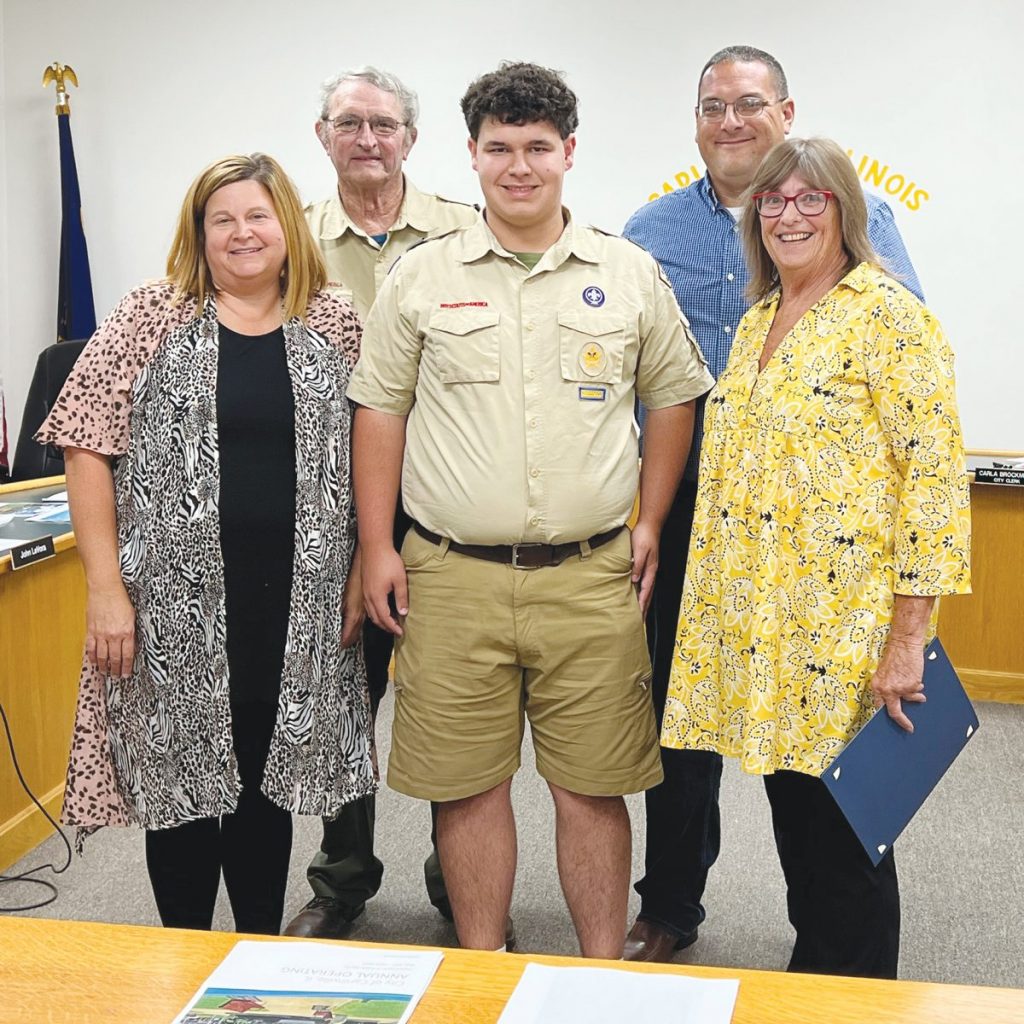 August is the time each year for the last five years that Woodard and Curran has put together and presented their annual report and Monday, Aug. 15 was no different. The council listened to reports about the waste water treatment, water treatment and bill collections as well as safety and street department information.

Several other topics were up for discussion such as the Carlinville Lake and zoning matters.

An Eagle Scout was honored at the meeting for the community service project he completed to attain the rank.

It was once again time for the Woodard and Curran yearly report at the Carlinville Council meeting.

The 2021-2022 year was the fifth and final year of the original contract with Woodard and Curran. A new five year contract began in May 2022.

From May 2021 until April 2022 the Wastewater Treatment Plant treated 521,444,000 gallons of water. Throughout the year the waste water quality was mostly within the acceptable range according tot the National Pollutant Discharge Elimination System (NPDES) the only item to go over the limit was Ammonia in August 2021 as recorded at 1.88 mg/L, with a limit of 1.5 mg/L. That was the only month the number was over the limit and the average Ammonia level for the year was .75 mg/L.

The drinking water quality averages for the year were all under the established limits in fluoride, turbidity and chlorine.

The water treatment plant was out of compliance in the fall of 2021 due to Lake 1 turning over. The water department was not able to use Lake 2 because of mechanical issues with the pump. The raw manganese levels rose to a level between .700 and .800 on Sept.. 22, 2021, but dropped again the next day to between .300-.400. This also affected the manganese level in the treated water rising to .120 on Sept. 23, 2021. The secondary standard manganese level is at .050.

Director of Public Works Dan Held explained the secondary standard is the level where “you can expect to see some discoloration in the water, perhaps a spot on a white blouse in the laundry.”

The data for the month following the spike in manganese levels shows all manganese levels at, but most often below, the secondary standard level.
The budget for year 5 of the contract was $2,436,037, which was the exact amount used over the course of the year. While Held says it is good that they were on budget there are many challenges facing the City in the future such as lead and copper rule changes, road reconstruction on Shipman Blacktop, and replacements needed at the Waste Water Treatment Plant and the Street Department.

Ryan Koster was recognized by the City for achieving the rank of Eagle Scout, the highest rank in the Boy Scouts. Koster took on a project revitalizing the Cavalry Cemetery for his service project.

The council approved Article XII of Chapter 40 of the City Code which allows for the creation of historic districts in Carlinville. Creating historical districts in town maintains and protects any buildings in the district from being destroyed or changed in outwards appearance without approval.

An ordinance establishing the position descriptions and job title changes for an Administrative Coordinator and an Economic Development Coordinator was discussed.

The administrative coordinator would be responsible “for directing the daily activities as assigned by the Mayor pertaining to the implementation of short and long term city goals, public relations and communication, coordination with other public and private organizations within the City, and coordination between other City departments.”

The Economic Development Coordinator would be responsible for “establishing and coordinating a sound economic development program through implementation and use of the powers granted to the City under the state municipal code.” Listed as examples in the job description are items such as conducting research and inventory of resources, preparing grants, and giving presentations to those considering expansion or location in the Carlinville area.

Some problems with the ordinance were pointed out, such as incorrect dates or language. The ordinance will be corrected and brought back to the council for final approval.

The Street Department will be putting signs up alerting drivers of the change. All student drop-off and pick-up traffic should use the new driveway.

A motion to move forward with the plans to annex the Carlinville Lake area was put before the council. Mayor Sarah Oswald was ready to quickly accept the ‘Aye’ votes and move the meeting forward, but was stopped by Alderman Doug Downey who had a few concerns.

Downey felt that the council was annexing the property to enforce ordinance issues at the Lake, but did not feel there was too much of a problem regarding ordinance violations. He was also concerned about the need for the Street Department to service that area as well in regards to snow removal, sewer problems or maintenance issues.

Alderman Randy Ober said it was his understanding that the septic systems currently in place would remain the same and there are no sidewalks in the area for the street department to maintain.

Downey said “If I am paying taxes to the city of Carlinville I am going to expect certain services.”

Oswald said that it was outlined in the lease for properties that the City would only remove snow from the main road at the lake and they would explain it to anyone signing a lease.

The motion remained on the floor and when the role was called Downey was the only vote against moving forward.

A motion to rezone 326 east First south Street was approved by the council. The site has been zoned as single family residential and will be rezoned to neighborhood commercial. Bright Smiles Dentistry bought the property to expand the parking lot of the office.

John Howard was appointed to the Board of Police Commissioners for Carlinville.

Breckenridge is the Area Outreach Manager for the Metro East and its collar counties.
The finance committee is going to look into local financing for water meter replacement. Harber says the last proposal they had for replacement meters was “north of $1.4 million.” That quote has since expired so they are estimating the price to be higher at this time.

A letter from Jon Convery asking to host an event on the Carlinville Square was approved. The Convery’s own and operate the Brave Hazel Boutique and requested permission to host Brave Days, an event they hosted previously at their home store location. The Convery’s asked for the use of the sidewalk on the South Side of the Square from the Tarrant and Harmon building to the corner of South Broad street, three to four parking spaces in front of Brave Hazel, the north half of the Hoch Street, and the Gazebo and lawn area for vendors and music to be set up. Brave Days would run from Oct. 7-9. The council approved the request.