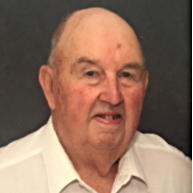 Richard Dale “Dick” Spencer, 87, of Gillespie, went home to be with the Lord Friday, July 15, 2022 at his home surrounded by his loving family.

He was instrumental in getting the FFA started at Gillespie High School. He attended the University of Illinois from 1952-1953 and served in the US Army until he was called back to the farm to work.  Dick started showing purebred Duroc hogs in 1948 in 4-H.  Dick and his brother Ralph attended many shows and sales over 60 years.

Dick loved playing fast pitch softball and was a dominating left handed pitcher.  He loved watching the Fighting Illini Football and Basketball and was a lifelong St. Louis Cardinals fan.  He was very proud to watch all of his sons participate in sports at Gillespie High School from football, basketball, baseball and track.

He was preceded in death by his parents, Jesse and Mayme Spencer; brothers, William, Donald, Ralph and sister Francis.

Visitation will be held on Saturday, July 23, 2022 from 9 a.m. to12 p.m. at Gillespie First United Methodist Church, 900 Broadway Street, Gillespie.

Burial will be at Wheeler Cemetery, Gillespie.

Memorials can be made to the First United Methodist Church Gillespie.

Anyone wishing to send online condolences may do so at kravanyafuneral.com.

Kravanya Funeral Home is in charge.