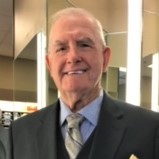 He was born June 2, 1930, in rural Macoupin County to Leland and Velma (Stayton) Oller. After his mother’s death in 1932, he went to live with his Aunt Lela (Stayton) Bown, growing up on her family farm in rural Carlinville.

Lin was a well-known figure around Carlinville, particularly in his later years when he devoted his time to his garden – selling tomatoes and blackberries at local markets and roadsides. He was a colorful figure and called himself a jack-of-all-trades. As a young man he worked as a farmhand and taxi driver. He was an accomplished welder, and he delivered ice and coal before joining the Fuller Brush company as a door-to-door salesman – a job at which he excelled and loved. He learned drafting while working for H&H Steel and Don Huff Steel Buildings, and later started his own business selling steel buildings throughout the Midwest. He went on to become an upholsterer and freelance draftsman, teaching himself 3D computer drafting in his 80s. He opened Lin’s New & Used store in the early 1960s and later gave to his Aunt Lela to run.

One of his great loves was flying his airplanes, which he learned to fly while traveling throughout the Midwest on his building business. He also had an affinity for Volkswagens collecting multiple bugs, buses, Karman Ghia’s, and Rabbits. He loved telling stories of his many adventures and gave the best hug around.

He was preceded in death by his parents; brother, Earl Oller, Mississippi; and sister, Joyce (Oller) Barton, Springfield.

Memorial donations can be made to the Alzheimer’s or Autism associations or foundations.