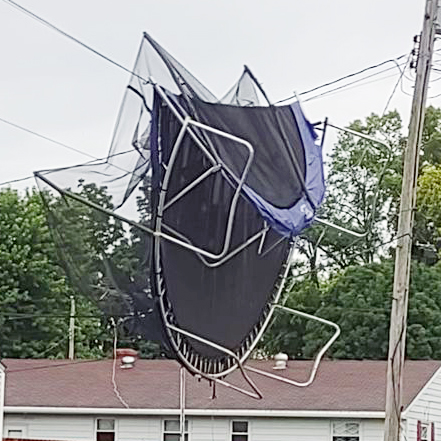 The heavy winds of Friday morning’s storm caused a trampoline in Bunker Hill to lift off the ground and become tangled in the power lines. Photo contributed.

A severe storm rolled through Macoupin County in the early hours of Friday morning. Severe thunderstorm warnings were issued early on June 17 following a group of storms moving southeast through Missouri to the St. Louis area. The warning for Macoupin County was originally in effect until 8 a.m. on Friday, but was later extended to 11 a.m.

Electricity merely flickered for some Macoupin County residents while others went without power for almost 36 hours. Trees were uprooted, causing damage to homes and vehicles. Damage was caused to many power lines and poles throughout the area, trees, broken lines and, in some cases, trampolines were caught in the power lines.

Ameren Illinois activated its emergency crews and engaged more than 100 tree trimmers to help with storm damage. Ameren reported that more than 53,000 outages were reported in the southern and southwestern portion of the Ameren Illinois service territory. MJM electric co-op also worked throughout the weekend to restore power. They announced via their Facebook page that all power throughout their service area had been restored as of Sunday at 3:12 p.m.