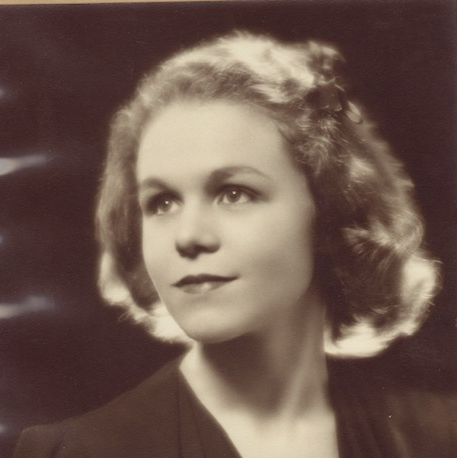 Lucia Kelso Adlfinger was born on May 30,1921 in Rosedale, Mississippi to Harriet Emma McClure Edwards and Lucius Evan Edwards.

She grew up in the small Illinois farming community of Carlinville, living in the loving home of her grandparents, James E. McClure and Florence Parker McClure, along with their daughter, her beloved aunt Dorothy. When she was 8, her mother married Dr. Leon Kelso, who served the medical needs of Carlinville residents during the depression, and Lucia was legally adopted.

She attended Randolph Macon Women’s College and Johns Hopkins School of Nursing, and served as an RN in the US Army during World War II. It was then that she met patient and future husband, Captain Vernon Adlfinger, at Oakland Regional Hospital. They were devoted partners for 53 years and raised three children while living in California, New York and Connecticut. They enjoyed retirement years back in Carlinville, with old and new friends.

In 2015, when her home got to be too much to manage, she moved to Seattle to live with daughter, Leslie and son-in-law, Peter. After her health declined, she moved to Hillwood adult family home.

Two memorable events occurred in her final year: a 100th birthday party with her living children and all her grandchildren plus good local friends, and also a small and special recognition ceremony honoring her as a veteran who had reached 100 years of age.

Her son, Timothy Adlfinger died in 1999.

A Memorial Service will be held Saturday, June 25, 2022 at 2:30 p.m. with Deacon Denny Baker officiating at the Mausoleum of Valor at Mayfield Cemetery.

Friends and family are invited to a party in Lucia’s honor after the service at 4:30 p.m. at 317 E Main in Carlinville.

Heinz Funeral Home is in charge of services.